There are plenty of indicators of rising pressure to advance ethical standards across the financial sector. One outcome takes the form of mountains of clean-up legislation, including from Brussels.

Jonathan Hill, the EU’s Commissioner for financial services, says better ethical conduct is central to success of the Capital Market Union. In a recent speech, he defined ethics as “clearly not the same as rules… An ethical financial sector is one that is focused on serving its clients, not itself.”

Notable among the list of institutions promoting better ethical conduct is the OECD. Recently the Paris-based organisation has been tackling the way out-of-court settlements are sometimes accepted in place of criminal sanctions for bribery offences. Here, it reports a study finding that of 126 companies across the world accused of foreign bribery between 1999 and 2014, 69% escaped with “settlements”.

The rapid processing of measures agreed by EU member states concerning corporate taxation is a further example of legislation with an ethical underpinnig. The automatic exchange of tax rulings (DAC3) between member states, as agreed last October, was achieved only seven months after the Commission’s original proposal. Final adoption by the Council is expected soon.

Some of the drive towards better ethical standards, initiated by the G20 group of leading economies, the OECD and others, stems from the views of the general public.

Evidence comes from the Edelman Trustbarometer 2016, which reveals “a yawning trust gap is emerging between elite and mass populations [those with incomes under the top 25%]”. The apparent stimulus is the attitude of the average citizen reacting to the 2007-08 financial crisis. 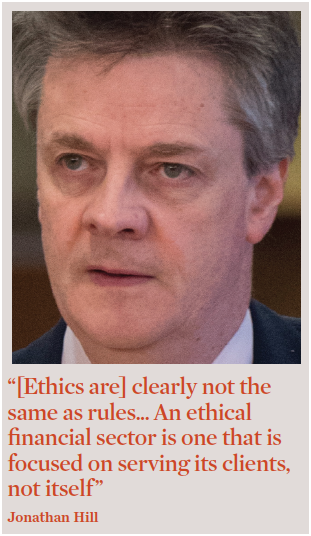 Edelman also finds “institutional investors aren’t getting the pro-active communication they want… Only 41 % are satisfied with what they receive in this regard”. It finds that trust among investors in financial services providers still ranks “relatively low”.

But there are plenty of signs that a radical shift might be on the way. Pension funds are in the avant garde here; for instance, the Dutch pension provider PGGM states it is convinced that contributing to a sustainable world is part of building a valuable future for its participants.

Sometimes small improvements in end-client focus are needed. In a consultation document on packaged retail and insurance investment products (PRIIPS) key information documents, the European Securities and Markets Authority (ESMA) posited the idea of automatically setting performance fees to zero in the case of poor performance.

This might be too radical for some but a compromise could be clearer and more transparent information. The Financial Services User Group (FSUG) favours the unified presentation of investment returns net of all fees including performance fees, plus benchmark returns, in one document.

“In a consultation document on PRIIPS key information documents, the European Securities and Markets Authority posited the idea of automatically setting performance fees to zero in the case of poor performance”

“This way, an investor would be able to assess the development of the returns for the product and benchmark as well. At the same time, he/she would be able to see the impact of fees on returns,” the FSUG said. Many will find it surprising that this information is not already uniformly available.

The British philosopher, the late Bertrand Russell, branded the subject of ethics with due scepticism. He described it as, “the art of recommending to others the sacrifices required for co-operation with oneself”. Whatever the purity of various motives, swathes of upgrades in the financial world are taking place. Further impact on different sectors, including for pensions, looks likely.