Letter from the US: Insurers back new annuities rules

Insurance companies hope to play a greater role in 401(k) retirement savings plans if congress approves new rules on annuities. Changes could become law by the end of the year if they gain sufficient bipartisan support to go ahead, notwithstanding the mid-term elections in November.

So far, few 401(k)-style plans have offered annuities for several reasons. “The main obstacle to adopting annuities in 401(k)s has been the fear of litigation,” says Neil Lloyd, head of US DC and financial wellness research at Mercer.

In other words, plan sponsors are afraid that if they pick an insurance company that ends up going bankrupt, the 401(k) participants will sue the sponsors. “The key new rule is the selection safe harbour to give employers some protection from future lawsuits,” he says.

“Another important new provision is the lifetime income disclosure – providing 401(k) participants with an estimate of the monthly income their current balance could generate with an annuity. Focusing on retirement income instead of only the lump sum can have a big impact and help workers make better decisions about their rate of savings.”

Prudential Financial, the insurance group that accounts for half of the in-plan annuity market in the US, is a supporter of the proposed new rules. “The proposed changes are very helpful to increase workers’ participation in 401(k)s and their rate of retirement savings,” says Doug McIntosh, vice-president of Investments at Prudential Retirement.

He rebuts critics who contend that annuities are complicated. “They are simpler than it seems and the benefits outweigh the complexity,” he says. “It is true that there is the perception that if I put money into annuities I’ll lose control of it and I’ll never get it back if something goes wrong. But there are products that offer income flexibility and guarantees full liquidity of the underlying assets – the in-plan guaranteed minimum withdrawal benefit (GMWB).”

With the latter each contribution establishes the participant’s benefit. Future withdrawals can then be calculated on this basis. Participants retain control of their account value but the income payment is based on the benefit value.

“Moreover, the Department of Labor has recognised GMWB as an appropriate tool for accumulation, not just for distribution, and as a possible default investment option,” says McIntosh.

“Prudential has a lot of experience in this field and our research shows that workers who invested in GMWBs contribute more. They are better diversified and less likely to switch investments during market downturns.” 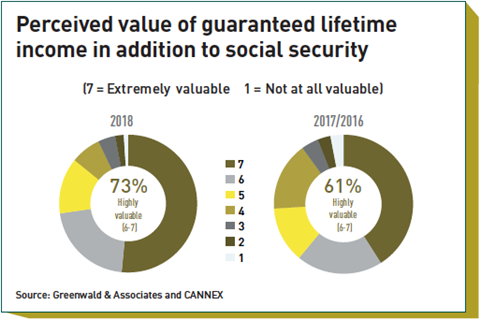 Institutional Retirement Income Council (IRIC), a non-profit think tank, is also in favour of annuities in 401(k) plans. Its executive director Bob Melia mentions the 2018 Guaranteed Lifetime Income Study from Greenwald & Associates and CANNEX, based on survey of 1,003 pre-retirees and retirees aged 55-75 with more than $100,000 (€86,000) in household assets. Some 73% of respondents consider guaranteed income a highly valuable addition to Social Security compared with 61% a year ago.

“Adding guaranteed income to our defined contribution (DC) system would provide a higher level of security for many Americans and would do so at far less cost than the retail market, thanks to the institutional pricing and the efficient mechanism that DC plans are able to obtain,” says Melia.

More sceptical is Robyn Credico, national practice director of DC consulting at Willis Towers Watson (WTW). “Some nine years ago, I was very excited about the idea of longevity protection,” she says. “But when insurance companies rolled out the products, they appeared to be too complicated and very expensive, even if bought in bulk by plan sponsors.’

She opposes a proposed rule that would make annuities portable, allowing employees to roll over an annuity from a 401(k) plan to an Individual Retirement Account (IRA) if the employer decides to stop offering the annuity or if the employee leaves. “I see many administrative challenges to a widespread adoption of annuities in 401(k)s. Today people change jobs five, 10 times and it would be very hard for insurers and account keepers to keep track of their movements.”

The Vanguard group, an industry leader, is against including annuities as a default investment option in 401(k) plans. “We believe annuities are useful for providing retirees with income that they cannot outlive and protection against the financial management implications of cognitive decline,” says Vanguard spokesperson Laura Edling. “However, as accumulation vehicles in 401(k) plans, annuities present several important trade-offs worth considering,” she says.

“Annuities are, on average, more expensive than mutual funds with comparable investment strategies, which could erode portfolio growth. Additionally, they offer relatively less liquidity and flexibility, even during the working years. For many participants, annuities may not be appropriate retirement income solutions, and this is challenging to predict during the accumulation phase. For these reasons, Vanguard believes decisions about annuitising wealth might be best delayed until closer to retirement.”

Some elements have been amended following a clarification from Prudential Financial