Letter from the US: Pensions push on climate change

This spring’s season of shareholder meetings is going to be very interesting in the US. Pension funds are using the meetings to push forward their agenda on climate change, asking large energy companies to adopt new ‘proxy access’ rules and assessing their carbon asset risks. At the forefront of this battle are two of the most prominent institutional investors in America – the $300bn (€284bn) California Public Employees’ Retirement System (CalPERS) and the $163bn New York City pension funds. Their approach towards decarbonisation is not to divest from energy companies, but to engage them.

“Our first tool is constructive engagement with the boards of companies,” Anne Stausboll, CEO of CalPERS, told IPE during a high-level workshop on addressing climate change in New York in March, which was organised by the Columbia University’s School of International and Public Affairs (SIPA) Center on Global Economic Governance and which gathered asset owners representing about $6trn from around the world.

“We have the fiduciary duty to manage our fund in a way that enables us to pay benefits in the very long term,” Stausboll continued. “A person who starts working today will be working for 30-40 years, then will be in retirement for 30 more years or longer. Our portfolio must take into account systemic risks related to climate change. That’s why last September we signed the Montreal Carbon Pledge, committing to measure and publicly disclose the carbon footprint of our investment portfolio. We are still exploring the methodology to do that, but we plan to finish the mapping by December 2015”. In the meantime, CalPERS is participating in two big projects – the Carbon Asset Risk (CAR) initiative and the proxy access resolutions.

“Together with 70 other global investors we asked 45 of the world’s top oil and gas, coal and electric power companies to assess the financial risks that climate change poses to their business plans,” added Stausboll, who is also co-chair of the board of directors of Ceres, the nonprofit organisation that promoted the CAR initiative.

Royal Dutch Shell is the first large energy corporation that has backed a shareholder proposal to recognise climate change risks by improving transparency. The company says it will urge shareholders to vote for the resolution at the annual general meeting on 19 May in the Netherlands. The BP board of directors has also decided to back a resolution on climate change at its AGM, held on 16 April.

“Our second undertaking is the board accountability project,” Stausboll added. “Shareholders have the right to elect directors who are independent, competent and diverse. So we are a firm supporter of shareowner proposals to nominate director candidates on a company’s ballot or proxy statement. NYC funds are the leader in this project; they have filed proxy access proposals at 75 companies, one-third of which is in the energy industry, including Exxon Mobil, Chevron and ConocoPhillips. We believe that the right directors are also more aware of the climate change risks and willing to take action about them”. 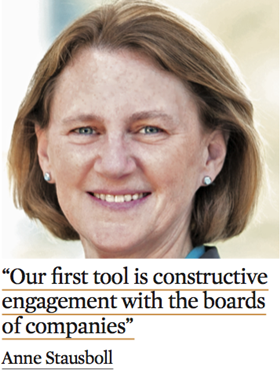 Another US institutional investor engaged in the proxy access campaign is the $851bn TIAA-CREF. In February, for the first time, TIAA-CREF mounted a vast campaign aimed at its top 100 US holdings, urging those companies to voluntarily endorse proxy access during the next six to eight months. The goal is to put “the issue on an express train” rather than wait years for numerous shareholder measures to pass, as Bess Joffe, TIAA-CREF managing director of corporate governance, explains.

ExxonMobil, Chevron and two other large energy companies, AES and Southern, have asked the Securities and Exchange Commission (SEC) for permission to skip votes on

the proposed new proxy access rules. But in February the SEC rejected their requests. It was the first win for New York City comptroller, Scott Stringer, who oversees the city’s pension funds.

On the Chevron proxy ballot in May there will be another proposal linked to carbon risks. The proposal is represented by Arjuna Capital and the non-profit As You Sow. It aims to pressure the oil company to stop investing in expensive fossil-fuel extraction projects – such as ultra deepwater, arctic drilling and tar sands projects – and instead share that money with investors as dividends. Chevron tried to stop this proposal too, but the SEC ruled in favour of including it on the proxy ballot.

However, the SEC took the opposite decision in a similar case. ExxonMobil also asked the SEC for permission to ignore the proposal advanced by Arjuna Capital and As You Sow. In March the SEC sided with Exxon, because the company has already partially implemented the proposal by increasing dividends.