After months of hard work, the English and Welsh local government pension scheme pools have received feedback on their plans. Susanna Rust reports

By early December last year, six of the eight emerging pools in the UK’s Local Government Pension Scheme had met Marcus Jones, the local government minister in the Department for Communities and Local Government (DCLG) to discuss their plans. Three of these – Border to Coast, Central and Wales – are understood to have been given the green light to proceed along the lines they set out in submissions to the DCLG in July; the Brunel Pension Partnership expects to be given the all-clear too.

By mid December, all the pools were expected to have had their meetings with the government. Those responsible for establishing the pools have been anxious for feedback from the government about the models and plans they have proposed, given what they see as a tight timeframe to be formally established by 1 April 2018; a phased transition of assets will follow.

Colin Pratt, investments manager at Leicestershire County Council – the administering authority for Leicestershire Pension Fund, which will be part of the LGPS Central pool – said there was “a huge chain of events” that must happen in the run-up to that 2018 deadline, including obtaining authorisation from the Financial Conduct Authority (FCA). “There are a whole host of things that need to be done, and we are working on all of them,” Pratt says. “We have made good progress to date, but the timetable is still very challenging.” The government’s headline criteria are for the pools to have assets of at least £25bn (€29bn) to reap frequently cited benefits of scale, strong governance and decision-making, the delivery of substantial savings in investment fees, and an improved capacity and capability to invest in infrastructure.

Two of the emerging pools – Wales and the Local Pensions Partnership (LPP) – are clearly beneath the scale criterion, but this does not appear to be a deal-breaker.

David Walker, head of LGPS investments at Hymans Robertson, tells IPE the government has expressed its support of the Welsh pool’s proposal given that they have a track record of working together and there are ‘strong political reasons’ for them to form a pool. With respect to the LPP, Walker said the government had written to some pools to indicate that it would like to see them work with the LPP to help it achieve scale, and that it was happy with the LPP’s structure. 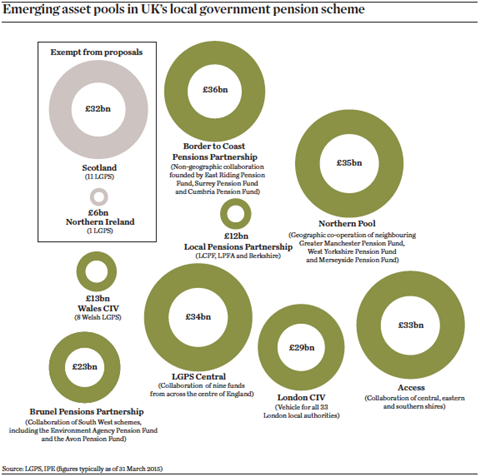 The government is also giving “a strong steer” on governance aspects related to pooling, in particular its desire to see an FCA-regulated entity within the pooling structure, says Walker.

The LPP and London CIV already have FCA-approved entities, and pools, like LGPS Central, that have proposed models closely aligned with the ‘DCLG model’, have been quick to get the approval of government.

The shape of infrastructure investment by the LGPS in the world of pooling is still evolving.

The platform may be evolving beyond the GLIL vehicle, however. At the IPE Real Assets conference in October, Paddy Dowdell, assistant executive director and head of real assets at the GMPF, said the GLIL had become secondary as a concept and that the situation was rather “about promoting a new way of working within the LGPS pools as they form”, coming together for infrastructure. The Pensions Infrastructure Platform (PIP), set up in 2011 with the backing of the Pensions and Lifetime Savings Association, has Scottish local authority pension fund Strathclyde as an investor, and the West Midlands Pension Fund.

A question mark hanging over the pooling project is the effect of local authorities being reclassified as retail investors under the transposition of MiFID II rules in the UK. The advisory board for the LGPS in England and Wales believes the timing of this poses a ‘significant challenge’ to the introduction of pooling, and was poised to raise its concerns and urge alleviating measures in feedback to a consultation by the FCA that closes in early January 2017.