Liquid Alternatives: The long and the short of it

The growth of the liquid alternatives market has democratised long/short investing. It has made alternative investments available to a wide range of institutional and retail investors.

they had thought, with meaningful variation in the risk/return profiles of the contrasting strategies. As market volatility becomes more pronounced – typically a catalyst for larger long/short allocations – the differences will only become more acute.

While the market-neutral strategies significantly outperformed in downward markets, they also sacrificed beta exposure in the run-up and rebound that book-ended the 2008 crisis. More traditional long/short funds minimised losses during the depths of the crisis. They were less constrained in capturing gains as the market recovered.

Structurally, market-neutral funds are designed to eliminate market risk (resulting in ‘zero beta’), by matching long exposure with hedge-driven short positions. Similar to any long/short strategy, market-neutral funds will target long positions in stocks that are expected to outperform the market and short positions in stocks with negative catalysts in place and considered to be underperforming. The objective is to achieve a net market exposure of zero, with returns generated by capturing the spread between the long and short books.

Variable long/short funds, in contrast, will generally have a fully invested long portfolio, but will construct short books ‘variably’ based on the nature of opportunities and the fundamentals of short candidates residing at the tails of the distribution. The short equity exposure, for instance, might range from as low as 20% during a cyclical downturn to 60% when equities are overvalued, or potentially more depending on the strategy.

While both categories emphasise stock selection as the driver of performance, where market-neutral strategies differ materially is in the structural barriers that impede a manager’s use of judgement. Beyond a mandate to match the net exposure between long and short positions, many market-neutral strategies may also avoid making sector calls or will aim to offset economic factors, such as oil prices or interest rates. 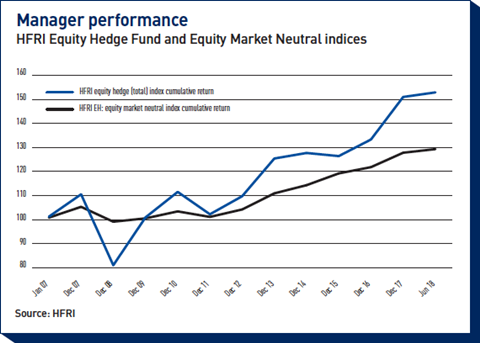 This can constrict active managers overseeing market-neutral strategies, as certain sectors might experience prolonged cyclical periods of fundamental weakness, affecting earnings quality, momentum and value. Europe’s banking sector, for instance, has represented a classic value trap for the past eight years. Valuations in the sector plummeted during the crisis, but with little in the way of stimulus available to the European Central Bank, Europe’s banking sector presents a difficult proposition for those seeking alpha. Reading the sector’s recovery becomes even more challenging when one considers that weak balance sheets continue to be weighed down by non-performing loans. It just represents compelling cases against either upside or downside scenarios for investors focused on fundamentals and value.

An oft-cited academic paper on the topic, ‘The dangers of mechanical investment decision making’, emphasises that, among hedge funds, the negative skewness typical to market-neutral strategies can “destroy years of careful compounding”. Few asset owners can forget the carnage of the financial crisis – it led to a round of liquidations among some of the more notable market-neutral hedge funds.

The same paper, which was published by London’s City University, also showed that the alpha generation of market-neutral funds, on average, consistently fell below more traditional equity long/short funds. This highlights the challenge for market-neutral portfolio managers during periods of compressed long/short performance spreads. This generally occurs when the market abandons its view of intrinsic value near a top, such as in 1999 or 2007, or following market dislocations, such as in 2003 and 2009.

However, a variable long/short strategy provides fund managers with valued discretion during markets like today’s. Global variable long/short managers can over-weight their long positions in places such as the UK, where shares have been depressed during the Brexit negotiations. At the same time they can emphasise specific sectors such as consumer discretionary or real estate in the short book to target overvalued companies that are more susceptible to earnings weakness or difficult business conditions. The flexibility can be even more important during periods of compressed spreads between the long and short books when the model signals that alpha is not available in certain parts of the market and at a given point in the cycle.

Zero-beta funds might be attractive in uncertain markets, but this overlooks the fact that historically the market has far more up days than down, even in bear markets. This creates a rising tide that tends to challenge market-neutral strategies in an extended up-cycle. Variable long/short funds, however, do not have to necessarily view their short positions as a hedge. The short book can also represent an additional lever to add alpha in overvalued markets. Importantly, variable strategies allow managers to calibrate their approach based on opportunities. If obvious short candidates do not exist they will not absorb the added costs and implementation risks.

Equity long/short managers are not immune to periods of weakness or missed calls. But if investors recognise the value of active management, particularly long-term buy-and-hold investors, variable long/short strategies allow fund managers to use their judgement to protect capital and opportunistically find alpha in their long and short holdings. However, market-neutral strategies might be more appropriate for investors with the insight and agility to move in and out of the strategy as the market dictates.

Josh Jones is a portfolio manager at Boston Partners