Lobby groups have clashed over the structure of the EU’s proposed pan-European personal pension product (PEPP).

Two groups of European parliamentarians have weighed in to the discussions about the PEPP’s rulebook, arguing in favour of inflation protection on top of capital guarantees.

The committee for Internal Market and Consumer Protection has supported a guarantee “at least to equal the contributions paid, including all costs and charges and after inflation”.

The parliament’s employment committee, meanwhile, has also called for inflation protection in the PEPP, which it said could be capped at 4% annually.

The committees’ comments follow calls from consumer campaign group Better Finance for politicians writing the PEPP rulebook to include protection against inflation in real terms, if possible.

Failing this, PEPP documents “should at the very least include a prominent warning about the devastating impact of inflation”, Better Finance said.

The PEPP rules are currently being debated and drafted by the European Parliament’s Economic and Monetary Affairs committee (ECON).

Pensions industry trady body PensionsEurope in its feedback to ECON said that the wording regarding guarantees was “not clear enough”, but stopped short of calling for inflation protection.

Instead it suggested that the PEPP rules include “a guarantee on the capital invested, as provided in the applicable legislation of the PEPP provider”, and that “when a capital guarantee is provided, it should be a long-term guarantee provided at the end of the accumulation period”.

However, insurance industry trade body Insurance Europe countered that “covering inflation on top of the capital invested would be extremely challenging – if not impossible”.

Consideration had to be given to “inflation’s fluctuant nature and the fact that it is not known at the time when [any] guarantee is issued”, it added. 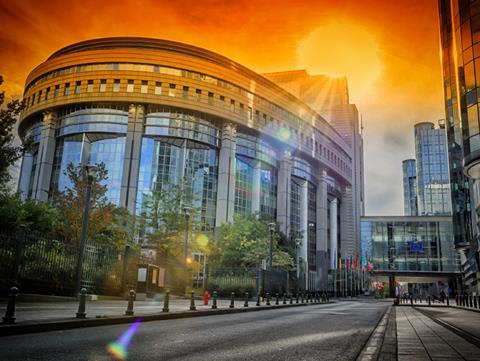 The European Parliament building in Brussels

Insurance Europe also called for politicians to be more specific with their proposals for capital protection. The European Commission’s current wording states that the default investment option for the PEPP should be protected through “risk mitigation techniques”. However, definitions have been left to ‘delegated acts’, meaning that a final decision would be made after PEPP negotiations have concluded.

The insurance sector group argued that, if left unresolved, this could mean levels of consumer protection varied “depending on the PEPP provider”.

In addition, the European Fund and Asset Management Association (EFAMA), which represents the interests of potential asset manager providers, argued that nominal capital protection was “highly misleading” because it did not take into account the erosion impact of inflation.

However, instead of inflation protection, EFAMA has argued in favour of life-cycle investment strategies, which it has claimed would give vastly better returns to almost all PEPP savers and address Better Finance’s concerns about inflation.

An obligation to provide a financial guarantee would also limit insurers’ access to the PEPP market, EFAMA said. This outcome would be highly unattractive to consumers, the association said, because a key goal of the PEPP initiative was to increase competition and enhance choice in Europe’s personal pensions market.

Separately, Better Finance also demanded “an overall fee cap of 1% for the default life-cycle option” for the PEPP.

However, Bernard Delbecque, EFAMA’s senior director for economics and research, told IPE that “a better approach would be to unbundle costs”.

“This would allow for transparency between the different types of fees, such as investment management, distribution, and advice costs,” he said. The PEPP’s intended single market would also achieve scale economies and reduce costs, Delbecque added.

Despite PEPP’s “mixed complexity”, the Commission has declared itself confident that PEPP rules would clear through the Brussels machinery on time and claimed that discussions on the proposal were “progressing well”.

It has also stated that there was no risk of the PEPP discussions delaying the progress of its flagship Capital Markets Union programme.

ECON is due to finish its work on the PEPP rulebook next month. Discussions between the parliament, the European Commission and member states will follow with the aim of an set of rules by the end of this year.

This article was updated on 20 August to clarify Insurance Europe’s comments.