Long Term Matters: Getting behind the stewardship bullshit on Carillion

Fund management is a pretty opaque profession, and no aspect more so than the way investors hold the management of investee companies accountable – variously called engagement, active ownership or stewardship.

But every so often things go so wrong that players are forced to come clean. Which is what has started to happen with Carillion. And it’s not a pretty sight.

Take, for example, what BlackRock told the UK’s ongoing parliamentary inquiry on Carillion about its stewardship of the company.

Nearly 80% of investors, BlackRock included, supported management’s outrageous proposal in 2016 that limited the criteria under which the company could demand the repayment of executive bonuses. Previously, repayment was required if the business went bust but the revised policy permitted this only in the event of gross misconduct or if financial results were misstated. Plain incompetence was seemingly fine. Admittedly, BlackRock did reject the first draft, but that’s hardly saying much.

During 2017 Carillion issued three profit warnings in five months. However, in her responses to the inquiry, Amra Balic, Blackrock’s EMEA head of investment stewardship, confirmed that the last engagement was in February 2017 and focused on executive pay. She appeared to blame Carillion’s board for this narrow focus; but shouldn’t an investor with 8% of the stock be responsible for setting a better agenda?

Was BlackRock unaware of how bad things were? Balic’s comments to the inquiry suggest otherwise: “We felt that there are a number of real questions around fixed contracts, variable costs, large levels of debt and the fact that the company has gone through a number acquisitions”. She also added that the firm’s active portfolio managers “did not see the industry and Carillion particularly as an attractive investment proposition”.

The bottom line is that BlackRock had a net short position of 1.64% in the company as of 12 January, according to the Finanical Conduct Authority. Indeed, Carillion was the most heavily shorted company on the London market for much of 2017. And it’s not just financial analysts who knew that the company was seriously at risk: the Pension Regulator for example met with Carillion’s pension fund 13 times in 2017.

So why wasn’t Carillion the target for major stewardship engagement by every index and long-only investor? It’s particularly hard to connect BlackRock’s actions with the sentiment expressed in the high-profile letter from Larry Fink to corporate CEOs in 2018. Inconsistency of this kind is, rightly, a lightning rod for public scrutiny but the sad reality is that this lax approach to stewardship is more or less shared by other index funds, closet trackers and perhaps some of active investors too. 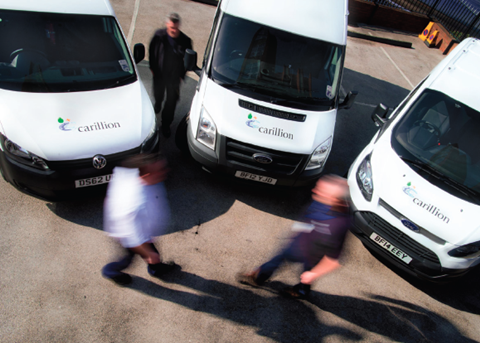 Financial analysts, and the Pensions Regulator, knew about Carillion’s problems

Trade union commentators have raised the possibility of conflicts of interest, notably the fact that BlackRock had a significant short bet on Carillion in some strategies. Perhaps just as important, and of relevance to all the investors who failed to be proactively as stewards, is the size of the stewardship teams given the size of AUM. BlackRock is the ‘universal investor’ par excellence. Doubling the size of its global stewardship teams to 60 is all well and good but far from fit for purpose for a mega fund manager of its size.

Of course, as with the global financial crisis, it not just investors who need to say ‘mea culpa’ – there is more than enough blame to go around. Auditors, in this case KPMG, deserve particular attention and the proposal by the UK accounting watchdog that the big four spin off their auditing arms is timely and I will return to this topic in a future article. And in the case of Carillion, civil servants and ministers also have major responsibility.

What should investors do? Clearly, incremental fiddling is pointless: we need transformation change. Here are three things that fund managers who want to be a bigger part of the solution could do:

• Index funds should spend 0.5bps on stewardship. For BlackRock, Vanguard and State Street alone this would be $700m (€568m), enough to pay for 3,250 engagement professionals $200,000 in fully loaded costs to engage with 20 companies each or 65,000 companies worldwide. Of course, this is a huge increase but no reason for not doing it. Unaffordable? Nonsense! BlackRock has some of the best paid investment staff in the world. BlackRock UK reportedly has more fund managers earning over £10m (€11.4m) per year than FTSE 100 CEOs. Organisations are always talking about staff who want to ‘give back’ and the wealthiest BlackRock fund managers could share stewardship costs with clients;

• Where an index firm also has an active fund management business, and where it doesn’t hold a company in the long-only portfolio – even more so if it is shorting this stock – there should be a clear presumption that it will not include such companies in its index. Sure, exceptions can be made but they should be argued explicitly;

• Where a fund manager is managing the pension fund of a company or is trying to secure this mandate or where the manager is shorting a company (that is, has an interest in the company’s collapse), the manager should be obliged by law to outsource stewardship to a third-party organisation, either a fellow fund manager or an engagement overlay provider.

Who will make all this happen? Not the commercial service providers. For all the talk of being customer centric an Orwellian opposite is the reality, as fees show. Regulators? Certainly not in countries such as the US where corporate capture of political and regulatory activity is now firmly entrenched. Even in the EU, we see with EFAMA’s pushback against the latest recommendations on sustainable investment how even a mild challenge to the status quo is resisted. The financial media? With honourable exceptions and IPE is one, most media outlets are too addicted to advertising revenue to challenge the hand that feeds them.

Millennials could lead this revolution. In the US and elsewhere, they are not only the largest generation but they will also receive the greatest transfer of inherited wealth ever. According to Legg Mason, they are more risk-averse than their older counterparts but they get higher returns. They are willing to think afresh, for example by investing outside the US and have a better asset class diversification. In short, Millennials are by and large a savvier (financially speaking) generation than we give them credit for.

How long it will be before Millennials cleanup fund management is impossible to predict. Whether they will tackle the behemoths head on, shame their parents into acting, as with guns, or use innovative financial platforms is also not yet clear. What’s without doubt is that fundamental change is coming.

Raj Thamotheram is founder and chair of the responsible investment think-tank, Preventable Surprises