This October, I wrote that investors would soon have to choose between backing social justice or going along with authoritarian- ism. I was not expecting that the choice would come so quickly, as Saudi Arabian officials assassinated Jamal Khashoggi that month and Brazil elected Jair Bolsonaro in November.

Investors – including ESG investors – favour ‘business as usual’ with some tweaks. Even investors who are willing to be explicit about their human rights concerns – as with the launch of the Corporate Human Rights Benchmark (CHRB) index – are less confident engaging with governments.

Western CEOs pulled out of a recent investor conference in Saudi Arabia, but deals were done as if nothing had happened, with deputies sent instead. And with Brazil, many investors argue that we should give Bolsonaro a chance, apparently learn- ing little from their experience with Donald Trump.

Of course, investors must be non- partisan and pragmatic, welcoming progress when it happens. They should, for example, support the appointment of Joaquim Levy – a former minister of finance from Dilma Roussef’s administration and current chief financial officer of the World Bank – to the Brazilian Development Bank (BNDES).

Some Brazilian contacts tell me the international community is over- reacting and that things are moving so fast that outsiders could easily be blind-sided. Certainly commenting from the cheap seats is not useful. But passively keeping fingers crossed, would also be irresponsible. The key question – in Brazil and elsewhere – is how opponents of Bolsonaro can work together to defend what they hold dear.

But, what does being proactive mean when authoritarian leaders are in charge? Priorities will need to vary country by country. Investors exposed to Brazil should focus on the climate emergency: unless we safeguard the Amazon we will not restrict global warming to less than 2°C above pre-industrial levels, and there is also the issue of human rights of the indigenous people.

Resistance is starting to develop: a broad coalition of Brazilian groups spoke up about the proposed take- over of the environment ministry by agricultural interests and this seems to have worked – the merger of the agriculture and environment minis- tries is off the agenda for the moment. Speaking loudly and collectively can work. Congratulations to UBS and MOV Investments for supporting this initiative. But when will other Brazilian investors who are part of PRI sign this reasonable agenda? 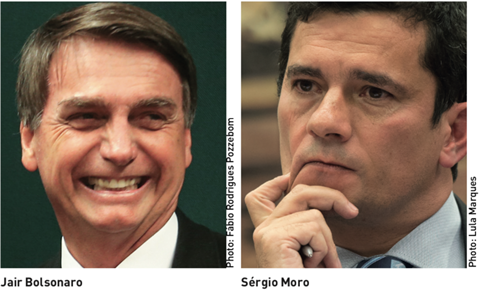 ESG investors who are exposed to Brazil will have to work fast and also think creatively to deal with the new strategic realities. For example, given that 80% of Brazil’s soy is exported to China, who can persuade the Chinese government and its banks – who want to be seen to be environmentally responsible – to use their influence to protect the Amazon?

To quote a Brazilian investor: “Green finance is not a good measure – it just makes good marketing sense, and Brazil is flooded with it. What we must watch carefully is the actual kinds of projects that get approved in the Amazon region, and the agribusiness footprint in the region. This is a ‘wild west’ and difficult to monitor. I suspect Bolsonaro will turn a blind eye, or worse, actively expel NGOs and foreigners on the back of nationalist arguments.”

ESG groups are already working with agribusinesses, reminding them to maintain the standards, as only this will protect access to European and possibly Chinese markets, too. ESG groups need to increase their active monitoring and, if needed, be ready to revoke their endorsement of Brazilian exports.

Agribusinesses should be clear that they have every reason to ensure that environmental protections continue. The requirements of poorer farmers will also need to be addressed.

Also important is corruption and bribery. The uncomfortable truth, of course, is that those with power have not done what they could for a long time. We are in a new context, because the crusading anti-corruption judge, Sérgio Moro, has been appointed as minister of justice and public security.

Understandably, many consider this as evidence that Moro was politically motivated from the outset. Who really knows. But if investors are not to be tainted by the same brush, they should address corruption and bribery, whatever the political affiliations. The International Corporate Governance Network (ICGN) has made clear anti-corruption recommendations, which many investors have implemented. Which investors in Brazil will sign up?

With regard to the wider social (S) and governance (G) agenda, as one contact says: “We need to see to what extent [Bolsonaro] dilutes a) aid for the poorest; b) protections for minorities and c) affirmative-action initiatives for Afro-Brazilians. Labour rights are also likely to suffer, but to be honest some labour market reform could be beneficial. Brazilian workers have as many protections as the French, with the result that the informal economy is huge because nothing can be enforced. More practical rules that can be better enforced would go a long way to giving the private sector more certainty to invest.”

It may be obvious but needs repeating – what happens on all these issues depends on a free press. ‘Strongman’ leaders always turn on the media. In times past, dictators called the press the “enemy of the people” but today, “fake news” works just as well. Worryingly, this has started in Brazil. Investors should make it clear that they expect the new government to protect journalists who were already at risk. Moro, the new minister of justice and public security has a particular responsibility given his role in jailing former President Lula.

To summarise, “let’s give Bolsonaro a chance” has potential but also grave risks. If Brazilians and foreigners choose to take this approach, the onus is on them to define – upfront and clearly – their own bottom lines. Otherwise they risk seeing these being watered down and unconsciously, they will be tempted to justify ongoing support.

More personally, those in Brazil cannot escape the everyday reality that “life will be harder for women, LGBTQ, minorities in general”, as a contact puts it. Principled ESG analysts need to move from being analysts to activists in solidarity with those who are at risk, and not just in Brazil.

Specific strategies need to be developed for countries where human-rights violations are endemic. The fact that no investor can cover all countries immediately should not stop investors doing what they can – perfection should never be the enemy of the good. If they do not want to do this, they might want to read How Democracy Ends by the academic David Runciman. All it takes is for powerful players to sit on the fence.