“There is no perfect pension system that can be applied universally,” but the truth of the matter is, some do better than others. In the eighth edition of the Melbourne Mercer Global Pension Index (MMGPI), Denmark, the Netherlands and Australia retained the top spots.

The index, a collaboration between Mercer and the Australian Centre for Financial Studies (ACFS), compares pension systems across the world. In the 2016 index, Finland moved up two spots, and Ireland edged into the Top 10, while changes to net replacement-rate calculations adversely affected countries such as Switzerland.

Denmark, the Netherlands and Australia maintained the three top spots, in that order.

Denmark and the Netherlands – with an index value of more than 80, equivalent to an A grade – are considered to have ‘first-class’ retirement systems. The Nordic country maintained pole position for the fifth year.

Finland, Switzerland and the UK were the biggest movers among the European countries in the top 10 in last year’s index. Finland moved up into fourth place, having been sixth in the 2015 index, while Switzerland and the UK each slipped two spots, into sixth and eleventh place, respectively. Sweden also moved down the rankings, into fifth. 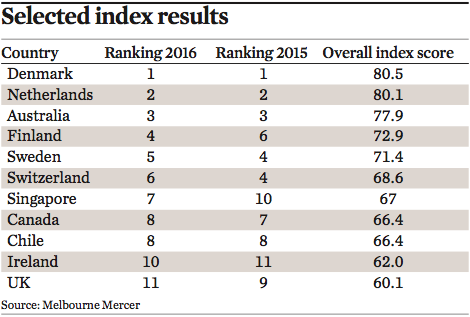 Ireland moved into the top 10, which is completed by Singapore, Canada and Chile, while Germany remains twelfth and France thirteenth.

The country’s pensions systems are scored on their adequacy, sustainability and integrity, with more than 40 indicators taken into account.

Twenty-seven countries were assessed in 2016, including Argentina and Malaysia as new additions. The index producers state that “there is no perfect pension system that can be applied universally” and warn against drawing too definite a comparison between countries’ systems when the difference in the overall index value is less than 2 points.

But they also state that, when the difference is greater than that, “it can be fairly concluded that the higher index value indicates a country with a better retirement income system”.

This year, the index took a closer look at the impact of rapidly ageing populations.

David Knox, senior partner at Mercer and author of the report, said the impact of longer life expectancies, combined with declining birth rates worldwide, is much more significant than has been recognised by many governments and communities.

“It is a political imperative that all countries, regardless of size, and current standing on MMGPI, implement the necessary policy changes to withstand future challenges presented by the globally ageing population.”

The average decline in the overall score was 1.5, with most countries’ scores affected by “minor changes”. In some instances, however, the score changed by more than two points.

For Canada, Chile, Germany and Switzerland, this was due to changes made to the calculation of net replacement rates the MMGPI sources from the OECD’s Pensions at a Glance publication.

The decline in the UK score was mainly caused by the reduction in the net replacement rate, which Mercer and the ACFS attributed to the introduction of a state pension, and voluntary contributions linked to auto-enrolment being excluded from the calculation.