5
Mortality: How a year makes a difference

Mortality: How a year makes a difference

Using the right longevity assumptions helps pension funds to calculate the necessary asset levels to fund future pension payments. In the current low interest rate environment, these tables become a lynchpin to keeping up funding levels in a downward spiral of diminishing returns and generous pension promises made in the past.

Swiss Pensionskassen can choose their longevity assumptions, but they have to adjust other technical parameters accordingly. One of them is the technische Zins, the assumption on future returns used to discount the accrual of pension assets. The Umwandlungssatz,  the conversion rate applied to calculate the monthly pension from the accrued assets, is also linked to longevity assumptions.

To make the industry aware of the effects longevity assumptions have on the funding situation of a Pensionskasse, Swiss consultancy Libera has made calculations based on a model pension fund: the accrued assets for the active members match those for the retirees. Based on the longevity assumptions in the BVG 2015 generation tables, one of the standard tables used by Swiss Pensionskassen, the fund would have applied a technischer Zins of 1.75% and accrued CHF69.3m (€60.5m) for pensioners, say Michael Weldmann and Manfred Thalmann, pension fund experts at Libera.

For Pensionskassen with considerably older retirees, mainly those with a majority of white-collar workers, the effects would have been more pronounced: At an average age of 75, the corridor would have been plus/minus 3.3% depending on the applied longevity assumptions.

Assuming that the current funding level in the model pension fund was 103% increasing life expectancy assumptions by a year would drop that to 101.7%. Lowering longevity assumptions, on the other hand, does not have as much impact as the funding level would only increase to 104.3%.

But, longevity assumptions alone are not the only factor to be taken into consideration by Pensionskassen when setting key parameters like the conversion rate.

Under the most recent BVG 2015 generation tables – due to be updated in 2020 – the conversion rate for women aged 65 born in 1953 is 5%. For men of the same age, it is 4.69%. This statistical truth can, however, only be applied by pension funds that are receiving contributions from employers above the mandatory second pillar payments (Überobligatorium).

“Given the lower life expectancy for men a higher conversion rate would be expected,” Weldmann and Thalmann point out. “However, this is overcompensated by the fact that at the point of death of a man more often than not he leaves a widow who is on average younger than the man and also, being a woman, has a higher life expectancy.” 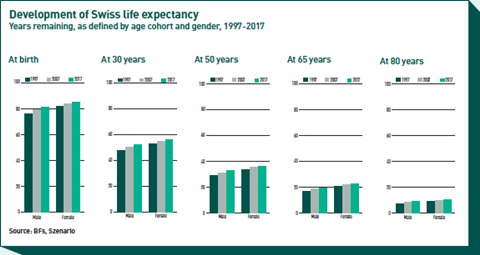 In the Swiss second pillar, it is mandatory to pass on retirement provisions to dependants such as widows and widowers as well as children up to a certain age.

Speaking at a conference organised by VPS in Zurich in October, Patrick Spuhler, founding partner of the Swiss multi-employer pension provider Prevanto, pointed out it might make sense to have a different conversion rate for women. Despite the fact that women live longer, they usually “cost less” after they have died as their husbands have died before them.

To illustrate the complexity of the issue he presented detailed statistics showing both married men and women live longer than the average after having reached 65, but life expectancy has improved most for divorced retirees.

Some Swiss pension funds are applying different conversion rates for different genders, others even differentiate between marital status. But this approach often takes too much effort, especially for smaller pension funds. In larger multi-employer funds, the membership is often too heterogeneous to allow meaningful groupings. Large pension funds for a single industry or a substantial company, however, might be able to gather statistics to forecast longevity assumptions and the impact of a marital status on liabilities.

But, as noted before, all this does not help pension funds that must solely rely on the minimum mandatory payments made by employers under the law governing the second pillar, the BVG. These have to apply a 6.8% minimum conversion rate, set by law. It can only be changed by the government and parliament and the change then only goes through if no one starts a referendum against it. Because then it is up to the Swiss people to decide. And they have already said no twice to a lowering of the conversion rate, in 2010 and 2017. But most analysts point out that these objections can be explained by the fact that in both referendums the conversion rate was part of a larger question put to the people. In 2010, it was a general vote of no-confidence against a lack of transparency from insurance-based pension providers. In 2017, the complex Altersvorsorge 2020 reform package was voted down for many reasons.

This means pension funds ‘surviving’ on the mandatory minimum have to use active members’ assets to make pension payments for retirees – and hoping for days with better returns. But also multi-employer pension funds – Sammelstiftungen – which are competing on the open market for companies and authorities seeking to outsource their pension plans, are feeling the pressure. For a long time, ‘offering the highest conversion rate’ was a selling point. But many are lowering these rates now to ensure the financial health of their enterprise.

At the VPS conference, Roger Baumann, partner at Swiss consultancy c-alm, presented a solution to the problem of intergenerational fairness. Older generations are still enjoying high pension promises, while younger generations are literally paying for them and are most likely facing lower pension payouts when they retire.

“A Pensionskasse should know the history of the separate generations of retirees and allocate surplus resources to create compensation for those that do not profit,” he says. “A general approach no longer makes sense after we have seen major differences before and after the crisis”.