Netherlands will be a centre for financial infrastructure, regulator claims

The Netherlands is to become the European centre for trading in equity and bonds after Brexit, the Dutch Financial Markets Authority (AFM) has claimed.

It said that it has been in “150 substantial discussions” with players from the UK interested in obtaining a license for doing business in the Netherlands.

“We expect that between 30% and 40% of the European trade in financial instruments is to move to the Netherlands,” said Merel van Vroonhoven, chair of the AFM.

Currently just 5% was based in the Netherlands, she said.

An AFM spokesman said subsequently that transactions were expected to increase from 2m to 20m per day, with daily volumes expected to rise from €2.2bn to €14bn. 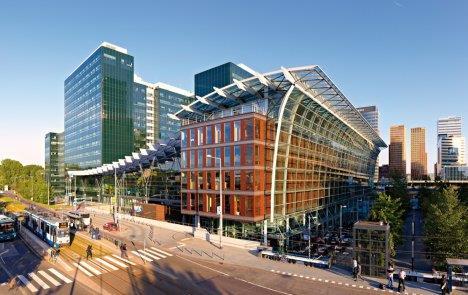 The World Trade Center in Amsterdam

Financial publication FD reported that platforms including CBOE, LSE Turquoise, Tradeweb and Bloomberg could move to Amsterdam, and that several providers of benchmarks and indices had also shown an interest.

This could involve financial giants such as like Standard & Poor’s and Dow Jones moving to the Dutch capital, FD reported, as well as up to 23 parties trading for their own account. Currently, only four of these operate in the Netherlands.

Van Vroonhoven cited “an almost invisible rotation in the European capital markets”, and also predicted that organisations relocating to the Netherlands would also attract other service providers.

“Moreover, it will enhance access to capital markets for Dutch schemes and other asset managers,” she said.

The migration of financial trade infrastructure would also offer proper guarantees for “uniform and effective supervision”, Van Vroonhoven continued, as well as “high standards for governance and the protection of investors”.

She said that an extension of the regulator’s tasks, investments in additional capacity, expertise, support services and IT systems would be necessary.

According to Vroonhoven, companies were focused on the Netherlands and weren’t shopping around in Europe “as applying for a license is complex and time consuming”.

She acknowledged that these changes could be limited if the UK and EU opted for a “very soft” Brexit – or no Brexit at all. “But as things stand, we can’t expect this,” she said.

Several other European cities have been attempting to lure London-based financial services companies, including Paris and Frankfurt. Luxembourg and Dublin have already experienced inflows of capital and company staff as asset managers in particular have moved to safeguard their EU businesses.