What happens when you put members in an MRI scanner? The Dutch pension provider APG has done just that. Gail Moss outlines how understanding the subconscious and intuitive neural processes that affect decision-making can benefit pension providers and members

• Consumers say they like choice in pensions but then often prefer to have their pension automatically arranged.
• Neuromarketing is a technique that shows how consumers subconsciously feel about pension choice.
• Consumer choices are influenced by the provider’s choice architecture.
• The use of defaults by providers can reduce the insecurity in choice-making.

Freedom of choice in pensions is a hot topic in the Netherlands right now. Research has shown that individuals claim to want more choice when it come to their pension arrangements. But survey respondents are widely perceived often to claim to want something, only then fail to make use of it when it is presented.

In 2015, Harry van Dalen and Kéne Henkens published a study in which they asked Dutch consumers how important they think it is to have freedom of choice in relation to certain aspects of pension provision, including:

For most elements of pension planning and investment, the majority of respondents said it was important, or very important, to have freedom of choice. However, when the researchers asked the same question, but framed it differently – namely, how important they think it is that these aspects of pensions are arranged automatically for consumers – they were struck by the fact that most respondents said that this is ‘important’, or ‘very important’, to them. So what do consumers really want?

In practice, take-up of pension choices is relatively low, not just in the Netherlands, but also in other countries.

This apparent contradiction between people saying they want freedom of choice but not using it in practice, led the Dutch asset manager and pensions provider APG to conduct neuromarketing research – the application of neuroscience to marketing research – to resolve the conundrum.

Research objectives
The research was intended to determine how consumers subconsciously feel about pension choice, and deliver insight into how providers should communicate that choice.

The latter process is known as the ‘choice architecture’ of a product, in other words, the design and presentation options for consumers, and the impact on consumer decision-making. The underlying premise of neuromarketing is that decisions made by consumers, as well as their behaviour, are determined by the way they subconsciously process information.

The emotional and intuitive reactions of consumers to certain stimuli can predict their behaviour, and they are often more accurate than the consumers’ own reasoning or opinions as consciously stated, for instance, through surveys.

APG had already successfully undertaken neuromarketing research in 2014 for its client ABP, the €381bn pension scheme for Dutch public employees, to improve the scheme’s communications in alerting its members to changes in pension rules, and prompting them to take the necessary action.

Together with ABP, APG conducted two online surveys on choice architecture and determined the extent to which it influences consumers’ choices. The survey was carried out with members of ABP’s permanent research panel.

The experiments covered defaults; the use of consumption language (income, spending) versus investment jargon (investment, return); the use of loss versus gain language; and providing peer information.

Participants were given the option of taking up part of their accrued pension capital as a lump sum when they retired. They were allowed to choose no lump sum, or 5%, 10%, 15% or 20% of their capital.

All participants were given the same choices, but presented in different ways to different groups.

There was one neutral group whose choices were presented with neutral wording and no pre-selected options.

The two other groups each saw the choice for lump sum take-up with one option (default) already selected: one group got a default choice of no lump sum, while the other group had a 10% lump sum preselected.

In a separate part of the experiment, participants were split into two new groups. For one, the choice was presented in consumer language (income, spending,) and for the other, in investment language (return, investing).

Each group was then subdivided into two further groups. The choices were presented to one group in ‘gain’ language and to the other, in ‘loss’ language.

Each choice was accompanied by a calculation of how much more (or less) money per month the participant would receive after taking out a certain level of lump sum. With the ‘gain’ language group, the illustration started by taking the maximum lump sum and the level of income that would result in, and then compared it with progressively lower lump sums with, conversely, increasingly more money per month to spend and a diminishing chance of income being too low.

The illustration for the ‘loss’ language group started with the income received if no lump sum was taken, showing how monthly income would fall, giving less to spend and increasing the chances of having too little money, as the chosen lump sum increased.

“These different ways of framing made plan members choose differently,” says Vonken. “In the ‘consumption-gain’ frame the average lump sum take-up was 6.3%, while for ‘consumption-loss’ it was 5.2%. For ‘investment-gain’ it was 8.0%, and ‘investment-loss’, 5.0%.”

A final test provided peer information for participants – for instance, what other people with the same income and mortgage situation, marital status and number of children, or the same education level and gender – had chosen.

“We see that this influences a significant number of people to follow their peers’ choices,” says Vonken.

The latest research was undertaken to find out whether members truly favour more choice, or prefer automatic arrangements for different aspects of their pension provision.

“When people are confronted with choice, it is a very emotional process, at a subconscious level,” says Joyce Vonken, marketing intelligence specialist at APG. “Neuromarketing research shows how people really feel in this situation.”

The research was intended not only to make APG’s choice architecture more effective and helpful to members, but also to find out how they intuitively feel about product choice, which should also help inform the debate around choice in Dutch pensions. It has also delivered insights into how providers should communicate pension choices.

The research was carried out by Neurensics, Europe’s first neuroeconomic research and consulting firm, which APG also commissioned to undertake the previous research. Tests were carried out using a sample of 24 volunteers.

Neuromarketing tests identify which parts of the brain become active when the individual is exposed to stimuli such as verbal or pictorial messages. They show which neural networks in the brain experience activity while assimilating a given piece of information.

In general, positive emotional reactions can include desire, expectation and trust, while negative responses include fear, anger and disgust.

APG tested which emotions are aroused – positively or negatively – when people are confronted by pension choices and when they have to value their own pension choice versus pensions that are automatically arranged for them.

It measured how they reacted to seeing pension choices – for example, the choice to take up part of the accrued pension capital as a lump sum, or the choice to decide how much premium to contribute – compared with having these options automatically arranged.

Next, the value they placed on the options they received automatically, compared with those they chose for themselves, was measured (see What goes on inside the MRI scanner?).

Individuals experienced more positive emotions and more value in relation to the options that they had chosen for themselves, compared to the same options but automatically arranged.

In contrast, the consumer experienced more negative emotions and less relevancy when they had to make a choice with respect to their pensions, compared to when pensions are automatically arranged.

Conclusions for providers
One important conclusion of the research is that decisions are influenced by subconscious processes. The negative emotions when confronted with pension choices can explain the low use of pension choices. Furthermore, additional research shows the impact of the choice architecture, for example, default arrangements (see How communication affects consumers’ choices).

People also appear to need help when making pension choices. “That means if providers offer different choice options, it is important to design a good choice architecture,” Vonken says. “They have to stimulate decision-making and help consumers choose the best arrangement for them, since they do not like to make choices on their own.”

Second, she says, it is also important to communicate effectively, so that a consumer is led into making a choice with which they feel comfortable.

Behavioural science insights can help providers with this; providers should be aware of the subconscious and intuitive processes that go on when consumers have to make pension choices. Behavioural science tools include defaults, the framing of choices, peer information, and social proof. Social proof could involve showing someone that people similar to themselves behave in the desired way, for example: ‘Register for our newsletter, 100,000 people have already subscribed’.

But communicating effectively does not necessarily mean giving consumers more information. This can result in information overload, which could make the decision process more difficult or even lead to decision paralysis.

In practice, these general conclusions translate into specific rules for providers:

•The number of options the consumer can choose from should be limited. Furthermore, the consequences of making the ‘wrong’ choice should not be drastic so that the individual feels safe. This is because they trust their own decision less than an automatically arranged one.

•The paradox between the consumer’s not wanting to choose, but valuing options more once they have chosen, can probably be tackled by the use of defaults. These can reduce the insecurity involved in the decision-making process.

What goes on inside the MRI scanner?

When they were inside the MRI scanner, subjects saw different pension choices (each with two options to choose from).

Besides these choice options, they also saw the same options with the message that these options were automatically arranged for them.

For example, they saw:

When you retire, the following is automatically arranged for you: You receive €600 net per month for as long as you live and you receive a one-off payment of €17,000 net.

Or they saw: When you retire you can choose between the following two options.

• Option 2: You receive €700 net per month. Participants had to choose while in the scanner. For each subject, there were two moments at which brain activity was measured:

• Moment 1: When participants were confronted with the choice versus the automatically arranged option

Asking participants how they valued the options (chosen or automatically arranged) puts the brain in ‘evaluation mode’.

Every choice should have a default. This has the advantage of giving the consumer a choice, while not forcing them to make one. Ultimately, however, they might feel as if they have done so, even if they have used the default. 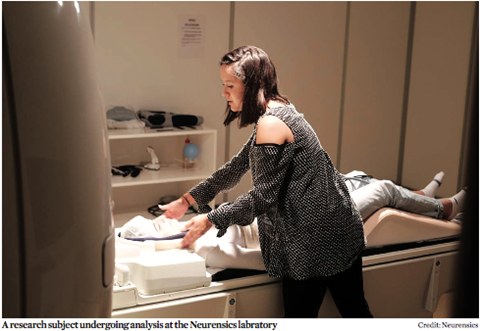 The relevance and reward of making a pension choice should be made very clear. For example:

•By, if possible, giving the consumer a direct (perceived) reward when they make a choice.

•Offering a concrete goal that can be achieved with a pension choice, because this helps to increase its value and relevance. For example, taking up a lump sum in order to pay off a mortgage scores better on perceived value/relevance than the mere possibility of taking up a lump sum.

Open question for the industry
Vonken says the Dutch pensions industry, particularly providers, needs to debate the way in which they want to guide plan members.

Vonken says the pension fund should decide if that is what it wants to do.

“However, at the same time it is nearly impossible to not influence someone in his choice-making, since every word or picture can have a subconscious influence on the choice,” she says.