They will be working with Minerva Analytics and Northern Trust to implement the service.

Institutional investors in pooled funds have historically relied on the investment manager to execute a voting policy for the pooled fund. When their preferences have diverged from the manager’s policy, they have been forced to accept the votes placed by the manager.

Christopher Head, head of business development at AMX, said the new solution was “a paradigm shift which will begin the transition of voting power from investment managers to the rightful institutional asset owners and will increase the speed by which important climate change and governance issues are addressed by corporate stewards across the globe”.

He said that although there were some pooled funds in the market that allowed split voting, they were either a fund of one large investor or funds that were not well advertised and only in place on a small basis.

“There’s nothing of the robust, scaleable nature that we have put together,” he told IPE.

The launch of the AMX-DWS service comes after the UK government last month announced the establishment of a group focussed on encouraging industry solutions linking investor preferences to voting on corporate policy and actions. 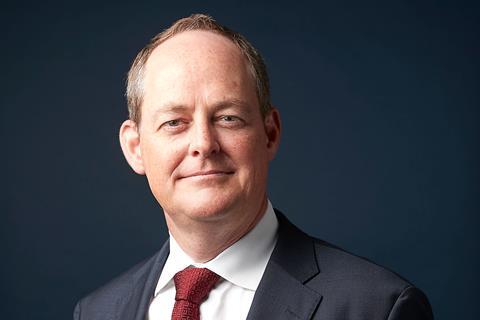 That in turn followed years of campaigning by the Association of Member-Nominated Trustees (AMNT) to get asset managers to implement split voting in pooled funds.

Guy Opperman, the UK’s minister for pensions and financial inclusion, said AMX’s and DWS’s new service “will tackle, head-on, the industry practice of ‘invest in my fund, accept my voting policy”.

“I strongly hope this prompts other pension scheme trustees to challenge their fund managers about plans to offer this service and drives engagement with other key issues such as how their managers are engaging and voting on pressing issues such as climate change,” the minister added.

Under new rules that came into force last year, UK pension schemes have to report on how they implemented their investment principles over the previous year, including voting and engagement behaviour.

At the AMNT, co-chair Janice Turner said: “AMNT has been campaigning for eight years to enable asset owners to have their voting policies implemented in pooled funds. We believe that AMX and DWS, along with its key partners Minerva and Northern Trust, have shown true innovation and leadership in the creation of this product, which puts the stewardship policy power where it is meant to be – with the asset owners.”

“We anticipate that this product launch will fuel the innovation that is desperately needed within the financial services industry to change their business models and products to better accommodate client voting preferences,” Turner added.

At DWS, Fiona Bassett, global head of systematic investment solutions, said: “Providers of index solutions can no longer be facilitators of passive ownership of assets, so I am pleased that DWS and our partners are innovating in this space to move the market forward and bring about the reform that is now generally accepted and much needed.

“DWS’s index tracking expertise goes back decades, and we also have substantial resources committed to putting us at the forefront of ESG advances, so we have the capability to not only bring this solution to market but to make it a success.”

The first fund to be available via the new service is expected to be a low-carbon equity offering, with new pooled funds to be supplied on demand.

Asset owners investing in a given fund will get to choose from a shortlist of voting philosophies that have been translated into a series of voting rules or “templates”.

AMX then aggregates the investors’ stewardship preferences and seeks to execute votes in alignment with investors’ expressions of wish. Where aggregate investor preferences conflict within a pooled fund, voting instructions can be split according to the proportion of ownership of the pooled funds represented by the voting philosophies.

AMX’s Head said that for some investors AMX could handle a bespoke arrangement.

He said that for AMX, a platform established by Willis Towers Watson in 2017, the new pooled fund stewardship service was “another step on our journey […] to provide institutional investors with best-in-class fund structures which disrupt the traditional and outdated ways of doing business”.

The infrastructure to provide customised split fund voting is Minerva Analytics’ Vote Plus service, which uses “advanced holdings and ownership reconciliation algorithms to connect the underlying investors with their proportionate holdings in a pooled fund”.

“Pooled fund index strategies are an extremely cost-effective proposition for long-term investors,” said Sarah Wilson, chief executive officer at Minerva. ”For too long, however, that has meant compromising on stewardship and voting issues.

“We’ve always believed that the application of smart technology can offer investors the best of both worlds: cost effective asset management with active ownership. We are therefore delighted to partner with AMX and DWS on this important and timely initiative.”

According to IPE’s 2020 survey of asset managers of UK institutional clients, at least £1trn is managed through pooled funds.