The €488bn Dutch asset manager APG has asked giant online retailer Amazon to account for the impact of its measures to protect its staff against COVID-19.

In a letter – which was also on behalf of 30 investors in group called the Human Capital Management Coalition – it asked for more clarity, noting that there seemed to be inconsistencies between the €3.4bn of protective measures the company claims to have taken and signals from the shop floor.

The letter was sent ahead of Amazon’s AGM on Wednesday.

Anna Pot, APG’s head of sustainability for America, said the letter had in part been triggered by media reports that coronavirus outbreaks had occurred in more than 50 Amazon warehouses worldwide.

She added that staff have organised protests and strikes, and had also started petitions to force the employer to do more to avoid infections.

Pot said she had watched a webinar last week during which several Amazon staff complained about and shared experiences.

APG specifically made clear that it wanted to hear from Judith McGrath, chair of Amazon’s internal safety committee, how she ensured that the company’s measures were effective.

“We want to know how Amazon will show that its staff are safe and also feel safe,” said Pot. 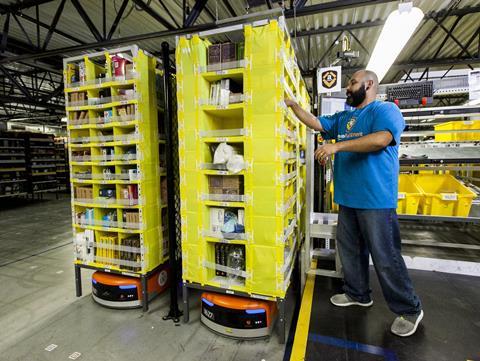 She noted that Amazon’s internal safety body had only met three times per annum during the past five years.

Pot said that staff policy and labour conditions were key elements of APG’s engagement policy, and that the investor had been in an engagement process with companies like Inditex and Nike.

She declined to comment on the possibility of APG divesting from Amazon if the retailer insufficiently accounted for its coronavirus protection measures, explaining that it expected a bigger impact through engagement.

APG has a €1.7bn stake in Amazon, its largest equity investment in the US.

The asset manager, which wrote the letter with the pension fund of New York city, said Amazon had agreed to a discussion with the two investors, but declined to say whether this already had happened or not.

The Human Capital Management Coalition aims to improve staff policy at US companies. Earlier this year, it asked 56 firms, including GAP, McDonald’s, Starbucks and Walmart, for additional information about their coronavirus measures.