Cheers and concerns over DWP climate amendments to pension bill

Climate change-related amendments to draft pension fund legislation tabled by the UK government have prompted words of welcome as well as concern from those in and around the pension industry.

The amendments to the Pension Schemes Bill, which has had its second reading in the House of Lords, reserve powers for the government to pass regulations mandating climate change-related reporting by certain pension funds and to impose requirements “securing effective governance” of pension schemes with respect to the effects of climate change.

At the Pensions & Lifetime Savings Association (PLSA) there are concerns that parts of the new amendments “would give unprecedented new powers to government bodies to interfere and request changes to private sector schemes’ investment strategies”.

“If that’s the case it would set a dangerous precedent and be wholly inappropriate,” said Joe Dabrowski, head of DB, LGPS and standards at the pension fund lobby group. “Nothing should cut across schemes’ fiduciary duty and freedom to invest in members’ best interests – and this will vary scheme by scheme.

“We urge the government to redraft the amendments and clarify its intent and respect for this principle.”

Carolyn Saunders, head of pensions and long term savings at Pinsent Masons, said the amendments were “a potential game changer for trustees”.

“The resulting obligations on trustees could extend far beyond the disclosure that is the main focus of the current statutory regime to require trustees to place climate change risk and opportunity at the heart of their investment strategies. And the need to publish information relating to the effects of climate change on a scheme will increase reputational risk for trustees and scheme sponsors.”

One of the amendments, which have been tabled in the House of Lords, states that “the requirements which may be imposed by the regulations include, in particular, requirements about … (c) determining, reviewing and (if necessary) revising a strategy for managing the scheme’s exposure to risks of a prescribed description”.

Stuart O’Brien, partner at law firm Sackers, said he did not read this as “a statement of intent” by the Department for Work and Pensions (DWP) to take action such as requiring certain investment allocations from private pension schemes, but that he could understand concerns about the wording.

“It’s possibly a bit of an overreach and it will be interesting to see if that gets tweaked or reined in,” he said.

The text of the amendments does not name-check the Taskforce on Climate-related Financial Disclosures (TCFD), but several observers view their tabling as the government teeing up mandatory reporting based on this framework.

In a statement revealing the amendments’ proposal, the DWP said the Work and Pensions secretary Therese Coffey and governor of the Bank of England Mark Carney met last week to discuss how to take forward the work of the TCFD.

According to the DWP, they discussed “pushing pension schemes to do more on climate change”. 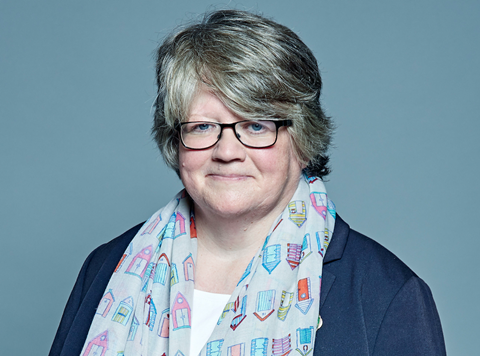 “I want the UK to continue leading the way on the climate emergency defining the twenty first century.”

The government flagged the possibility of mandatory TCFD-based reporting for large asset owners in its green finance strategy announcement last summer. It said large asset owners – and UK-listed companies – would be expected to report on climate change risk by 2022, that the reporting should be in line with the recommendations made by TCFD, and could become mandatory depending on the view of a joint task force of UK regulators.

The DWP has been involved in an industry group working on guidance for pension scheme trustees about how they can identify and address climate risk, building on the TCFD recommendations. A consultation on the draft guidance is due to be launched next month.

Fergus Moffatt, head of UK policy at ShareAction, said the responsible investment campaign group was “delighted that the UK government is taking steps to implement TCFD on a mandatory basis”.

“ShareAction has been working closely with DWP on guidance for pension schemes, and we’re very hopeful these world-first reforms will accelerate climate action,” he added.

“It will help to ensure savers’ assets are invested in the way they want them to be and give trustees a better metric to deliver against.”

Some large UK pension funds already report in line with the TCFD recommendations.

In 2015 France became the first country to introduce mandatory climate change-related reporting for institutional investors, but this was not on the basis of the TCFD framework, as it had not yet been developed.

In the UK, since October last year defined contribution pension schemes with more than 100 members have been obliged to have published a policy on their approach to financially material considerations, including those related to factors such as climate change.

Last week advocacy group UKSIF published a report flagging “large-scale non-compliance” with this requirement as well as poor quality policies by those schemes that did publish a policy.