Pension funds in the Netherlands and their advisers are not too concerned about the possible impact of rising inflation on pension fund assets. For some funds, higher inflation even is a joyful prospect.

“Rising inflation is definitely a theme that’s on the radar with our pension fund clients, but it hasn’t yet translated into changes in their investment policies,” he said.

Some pension funds have shown increased interest in inflation-linked bonds (ILBs) to hedge against inflation risk, he said.

“But this has been limited to only a handful of funds. Most pension funds are defined benefit funds, and have not been able to index pensions for many years now. Therefore, these funds are automatically focused much more on their funding ratios than on inflation risk,” Geraets noted.

“Funds that have funding ratios below the required minimum also have very limited room to change their asset allocation. So they often can’t allocate more money to inflation hedges such as infrastructure, real estate or commodities anyway,” he continued.

However, funds with comfortable funding ratios that index pensions each year also seem not to have taken any action. “We have not increased our inflation protection,” said Maarten Roest, head of investments at the ABN AMRO pension fund, which had a funding ratio of 126% at the end of January.

“However, we will take into account the possibility of higher inflation in our upcoming ALM study,” Roest added.

Rik Klerkx, head of portfolio and treasury management at pension fund consultancy and asset manager Cardano, has seen a number of clients “paying increased attention” to ILBs and inflation-linked swaps over the past couple of weeks.

“But action has been limited overall, and the larger Dutch pension funds cannot really invest in inflation-linked bonds meaningfully because this market is too small for them.”

Part of the reason for pension funds’ lack of action could also be the fact that they are currently being consumed by other events, such as the upcoming transition to a new pensions contract, Klerx said.

“In a way, this is a shame as inflation can suddenly pick up really quickly. If you start hedging against inflation only once inflation expectations start picking up, you will be too late. So now could be the time to do it.”

Figures from pensions regulator De Nederlandsche Bank (DNB) show that Dutch pension fund allocations to index-linked bonds had fallen to an all-time low of €14.7bn at the end of 2020, from €55bn only two years earlier. These numbers suggest pension funds have been actively reducing their allocation to these investments.

Now could indeed be the time to reverse course and swap part of their allocation to nominal government bonds for ILBs, according to Lorenzo Pagani, head of government bond portfolio management at PIMCO. 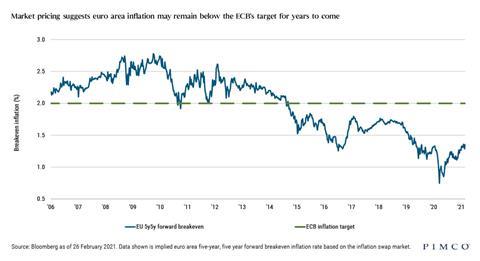 “The five-year, five-year-forward (5y5y) implied [the] breakeven inflation rate in the euro zone is currently around 1.4%, which means the market predicts that average inflation between 2026 and 2031 will be 60 basis points below the ECB’s target,” he wrote in a blog post.

The relative scarcity of ILBs could also turn out to be an advantage once inflation starts to pick up, he added. “The issuance in ILBs is much smaller than in nominal sovereign bonds, and governments might reduce the linker issuance further if they start to worry about the source of inflation.”

Inflation risk ‘not a priority’

While inflation expectations have yet to pick up, interest rates have already risen quite considerably this year. It’s therefore too late for pension funds to lower their interest rate hedge, according to Klerkx. But, he acknowledged: “For most funds, protecting your funding ratio against downside risks is the first priority.”

“A scenario of falling inflation and lower interest rates would be more hurtful, because this would lead to lower expected returns and higher liabilities,” he said.

Knaap also noted that APG’s pension fund clients already have a reasonable degree of inflation protection in their portfolios. “Such as investments in commodities and real assets such as infrastructure and real estate. All our clients have several of these categories in their portfolios.”