It is hard not to feel some sympathy for the technical staff working on the European Financial Reporting Advisory Group’s (EFRAG) pensions research project.

In total, the document has attracted just 13 comment letters. Arguably, none of them offers unqualified support for any of the three approaches proposed.

The pension promises falling within the document’s scope promise either a return on an “identified item or group of items” and a guaranteed minimum return – whichever is the higher. The other criterion is that the sponsor holds the assets in question.

All three involve measuring plan assets at fair value and focus on the measurement of the plan obligation. The capped-asset approach attracted the strongest – albeit qualified – support. It adds up to measuring the pension liability at the higher of the IAS 19 obligation:

This is as good a point as any to consider the work of the International Accounting Standards Board (IASB) on pensions. Just like, EFRAG, the IASB agrees that IAS 19 accounting is broken  when it comes to asset return-based promises, and is researching a new approach. The focus to date has been on pension promises that are dependent on the return from a specific pool of assets. The thinking is that sponsors would account for their obligation by capping the rate of return on those assets at the IAS 19 discount rate.

As things stand, both probably want to revisit the promises within the scope of their respective proposals. For example, EFRAG notes that “more work is needed to assess if the approaches explored in this discussion paper would also work for plans where the plan does not hold the items upon which the benefits are dependent”. Equally, the IASB’s project is at an early stage with the board set to review the staff’s research in the second half of 2020.

One further point is that at its November 2015 meeting, the IASB considered and rejected both a fulfilment-value model and a fair-value model.

This is where things get complicated. Because not only will the IASB want to consider the comments that EFRAG has received, but the board has also paused its project to amend its asset-ceiling guidance, IFRIC 14, until it knows the outcome of the research project.

So, where does EFRAG stand now that the comment letters are in? In response to a question from IPE, a member of the project team explained: “The next step for the EFRAG secretariat is to prepare a summary of the feedback received and present it at the EFRAG TEG [technical expert group] meeting. In early March, EFRAG TEG will discuss the possible ways forward.” 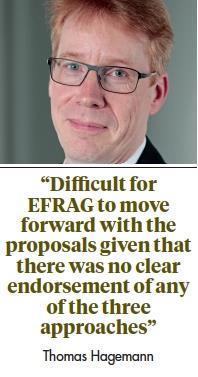 Meanwhile, Thomas Hagemann, Mercer’s chief actuary in Germany, has followed both the challenges of accounting for asset return-based promises and the EFRAG project. “The feedback was very interesting for me from what I have read,” he says, “because it seems that no one supported either of the two more complex approaches.

“When it came to the capped-asset approach, there were really two points of view in the comment letters. First, there were those such as the aba [German Association for Occupational Pensions], IVS [German Institute of Pensions Actuaries] and DRSC [German Accounting Standards Committee] who said they supported it – but with changes – and others who rejected it outright.” It is worth noting that the UK’s Association of Consulting Actuaries did support the capped-asset approach, mainly because it was closest to the IASB’s current thinking, but warned of the twin dangers of less comparability and higher valuation costs.

Moreover, Hagemann expects it to be “quite difficult for EFRAG to move forward with the proposals given that there was no clear endorsement of any of the three approaches. At the same time, EFRAG is not a standard setter; rather, its role is to represent the European Union’s interests within the framework of the IASB’s standard-setting due process and offer the bloc endorsement advice on individual accounting standards.”

But one of the harshest assessments came from Swedish trade body the Swedish Enterprise Accounting Group, which argued that the real problem is the IAS 19 discount rate. “[W]e generally believe that the proposals in the DP will not solve the real issue with accounting for pension plans. Thus, none of the approaches should be further developed.”

Nonetheless, the responses to the EFRAG consultation will confirm to the board that there is a modicum of support for their preferred capped-asset approach. Equally, however, that is no guarantee that the response to any IASB discussion paper will be a positive endorsement of the approach.

But, perhaps just as intriguing as the accounting questions thrown up by hybrid pension promises is the apparent lack of engagement from among Europe’s pension scheme sponsors with the EFRAG paper. Andrew Mandley, a consultant actuary with Willis Towers Watson, says this could be because the real focus is on where the IASB is going.

“I do not think it is a particularly major issue in the UK, but there is always the potential for side effects for how some UK hybrid schemes are accounted. The overall approach that the board has started to develop so far feels like a reasonably pragmatic approach to take. In fact, it is probably not a million miles away from what the few UK schemes that fall into this category are already doing. For me, it seems a sensible way to deal with this specific challenge without rewriting IAS 19. I also think it should be relatively cost-effective to implement.

“By comparison, the EFRAG paper goes into a lot of detail and it felt to me as if they were going a lot further in terms of complexity than we see in IAS 19 currently. This makes me wonder if this might be going too far. I would prefer to wait and see where the IASB goes after considering the EFRAG paper before forming a view on what they are doing.”

And, from a German perspective, although they face several accounting challenges from hybrid plan designs, they have also arrived at what they suggest is a working compromise. “Fundamentally,” explains Hagemann, “the approach we currently have in Germany is to value the minimum guarantee as the basis for calculating the DBO [defined benefit obligation] and then increase it to the fair value of the plan assets, if higher.

“This is not so far from the capped-asset approach that EFRAG has proposed. It is well accepted in Germany by both actuaries and auditors.” And even if it is broke, why fix?