More than 60 additional investors have signed up to Climate Action 100+, an initiative aimed at reducing greenhouse gas emissions.

Climate Action 100+ launched in December 2017 with 225 investors on board and is now backed by 289 investors with nearly $30trn (€26trn) in combined assets under management, according to an update from the initiative.

“The growth of Climate Action 100+ among the global investment community in the last six months is more than we ever expected,” said Anne Simpson, investment director of sustainability at the California Public Employees’ Retirement System.

“More investors and pension funds are coming together in partnership to engage with systemically important greenhouse gas emitters that are producing 85% of carbon emissions on climate change.

“We are doing this because of the serious financial risks at play across the global economy.”

The Climate Action 100+ investors have also added 61 names to their list of target companies. The companies were added because the investors considered them material to their investment portfolios. They either had significant opportunities to drive the low-carbon transition and help achieve the goals of the Paris Agreement, or were exposed to climate-related financial risks not captured fully by emissions data.

Investors signed up to Climate Action 100+ have called on companies to improve their governance on climate change, curb emissions, and strengthen climate-related financial disclosure.

Emily Chew, global head of ESG research and integration at Manulife Asset Management, said: “By adding additional companies to the focus list, we are expanding our potential impact on reducing systemic climate-change risks, and realising the economic benefits of the low-carbon transition.”

Climate Action 100+ is coordinated by five partner organisations including the Institutional Investors Group on Climate Change and the UN’s Principles for Responsible Investment.

‘Still not quite too late’

The news of Climate Action 100+’s expansion comes as the Archbishop of Canterbury, Justin Welby, told backers of another investor-led initiative on climate change they needed to “flex [their] muscles ever more clearly and ever more powerfully”.

Speaking on the occasion of a conference to mark new research from the Transition Pathway Initiative (TPI) – a £7trn asset owner-led initiative to assess how companies are aligning themselves with the transition to the low carbon economy – Welby said the research was “illuminating in many, many ways” but that “we must distinguish process and outcome”.

“The TPI is something that must produce outcomes,” he said. 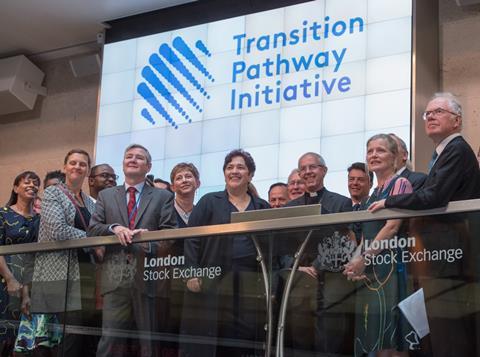 Led by Simon Dietz at the London School of Economics, the TPI analysis presented at the event was of the electricity, coal, and oil and gas sectors and showed that, although companies had made significant improvements with regard to carbon policies and management processes, most were yet to adopt business strategies that aligned with the goals of the Paris Agreement.

The £2.3bn Church of England Pensions Board (CEPB) announced at the event that it intended to develop an equities index building on the data and analysis produced by the TPI.

Alan Fletcher, chair of the CEPB’s investment committee, said the board had held preliminary discussions with FTSE Russell and the Grantham Institute at the London School of Economics and wanted to invite other investors to work with it on the project.

“Our announcement and invitation to you has come about as we are keen to bring our passive holdings into play in support of the low carbon transition and to better manage the risk that companies assessed poorly by TPI will not be well placed to manage the transition to a below 2 degrees of global warming,” he said.

The CEPB had more than £500m invested in passive equities, according to Fletcher.

He said he hoped the development would signal to companies “that asset owners are responding to the transition and moving their capital to those businesses that are best placed to manage this critical issue”.