The Net Zero Asset Owner Alliance has gained two new members and kicked off its campaign to help achieve the Paris Agreement goals by driving change via engagement with companies.

Launched in September, the now 18*-strong group of pension funds and insurers today announced that it had gained new members in the form of the Church of England, with its three national investing bodies, and Italian insurance group Generali.

The announcement coincided with the group’s holding its first major engagement event, getting together with more than 50 C-suite representatives of the now $4.3trn (€3.9trn) alliance’s portfolio companies in a closed-door session at the World Economic Forum’s conference in Davos, Switzerland.

Speaking at a press conference in Davos, members of the alliance emphasised the importance of engagement, as distinct from investment or divestment, to preventing a global temperature increase above the 1.5°C set out in the Paris Agreement.

“The climate crisis will not be solved unless the transition happens” 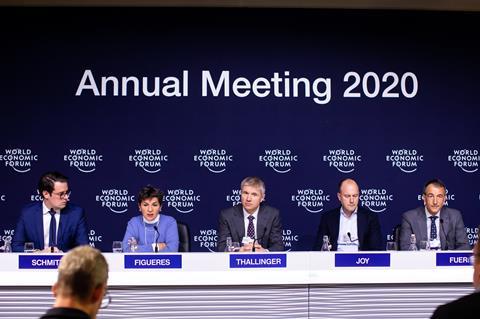 The Church Commissioners have dedicated more resources to engagement, for example having last year expanded their engagement team with the appointment of two analysts.

Günther Thallinger, member of the board of management at Allianz and chair of the Net-Zero Asset Owner Alliance steering group, acknowledged that there was an expectation that money must be shifted, “essentially divesting in some areas and investing in others”, but said this was not the route the alliance would be taking.

“We believe we can achieve a much better impact by working with the companies we invest in or the assets we finance,” he said. “If we work with those assets we have a chance of doing value creation and that’s what an investor looks for.”

Christina Figueres, convener of Mission 2020 and former Executive Secretary of the UN Framework Convention on Climate Change, said it was important to understand how complex it was for companies to decarbonise, in particular with respect to the Scope 3 emissions from their supply chain.

According to Figueres, the Alliance’s engagement with companies had got off to a good start, with “a very clear recognition it needs to be an effort on both sides”.

The companies involved were not only “willing to speak but also had an appetite [for the conversation],” she said.

Allianz’s Thallinger explained that the asset owner alliance would this year be announcing its first interim decarbonisation target, and that the engagement with companies was “of an essence because the target we will define in 2020 will be supported by measures we are working on with those companies”.

“We believe we’re talking about something that is transformational for various areas, not only investing”

Günther Thallinger, member of the board of management at Allianz and chair of the Net-Zero Asset Owner Alliance steering group

“And that’s why we believe we’re talking about something that is transformational for various areas, not only the investing space.”

Thallinger also explained that the Net-Zero Asset Owner Alliance was very keen to expand its membership to cover geographically under-represented areas, in particular Asia, but that it was important to be “honest” and acknowledge the policy and political context in which asset owners from that region operated.

The members of the Alliance hoped that other jurisdictions would be more open to encouraging their asset owners to come on board, he said.

According to an update from the convenors of the Alliance, the UNEP Finance Initiative and the Principles for Responsible Investment, the group has finalised its governance and objectives for 2020 and will focus on advancing measurement and public reporting and engaging policymakers towards policies supportive of net-zero economy ambitions, in addition to engaging with companies.