The UK minister for pensions and financial inclusion is planning to consult on regulations to “nudge” smaller defined contribution (DC) schemes to consolidate.

In a wide-ranging speech at the Pensions & Lifetime Savings Association (PLSA) investment conference yesterday, Guy Opperman indicated the consultation would take place in the spring.

After bringing up the subject of illiquids, he said he was “unequivocally persuaded that improved scale and improved choice in DC pension schemes will drive better returns”.

“There are many thousands of occupational DC schemes where members are themselves the trustees,” he added. “Trustees of these schemes suffer from power imbalances when engaging service providers, with little more power than retail investors, and they’re missing out clearly on good governance.”

Schemes should be “under no illusion” that the government was after consolidation, he said.

According to The Pensions Regulator, 95% of DC schemes are “micro” – with two to 11 members. It is seeking to improve standards of governance and trusteeship at poorly run small schemes, of which it says there are many, but also pointing to consolidation.

Speaking on a panel at the PLSA conference today, Chris Hitchen, chair of Border to Coast Pensions Partnership and chair of defined benefit scheme consolidator The Pension SuperFund, welcomed the minister’s comments, saying “consolidation in all its guises is probably greatly to be wished given the current state of our industry”.

In his speech Opperman also indicated a consultation would be coming up on regulations allowing schemes to pay performance fees without diluting the charge cap.

This could give schemes a wider choice of illiquid investments in certain high-risk sectors, he said. 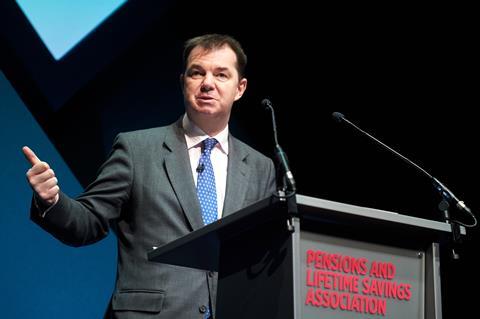 “Along with the FCA’s work on updated rules on permitted links and Treasury’s work on patient capital, this has the potential to deliver diversified returns whilst facilitating investments in the assets we all need.

“And I don’t think you should be under any illusion post the election on December 12 that investment in infrastructure and illiquids is something the government is passionate about.”

In its Budget announcement this week the government laid out a five-year plan to spend £640bn (€733bn) on infrastructure, described as “an almost unprecedented spend” by one observer.

Opperman also spoke about the Pensions Scheme Bill, which he said he hoped would become law by the summer term – mid to late July.

He sought to address what he said were concerns amongst some about the new criminal offences it introduces targeting conduct that avoids employer debt to pension schemes or risks accrued benefits.

He said it was only an offense if there was an intention to harm the pension scheme and the person should have known his or her conduct would have that effect and had no reasonable excuse for the actions.

It was important for TPR to be able to respond appropriately to any such actions, and it was not the government’s intention to interfere with routine business activities, he said, underscoring that the measures were aimed at people like Philip Green, the businessman who owned the retailer BHS before it collapsed.

A big focus of Opperman’s speech was on ESG. He confirmed his intention that pension schemes be mandated to report publicly in line with the recommendations of the Task Force for Climate-related Financial Disclosures, indicating his plan for a consultation on this in the early summer if the relevant amendments to the Pensions Scheme Bill are passed.

However, he also indicated he was interested in schemes reporting “Paris alignment as a more compelling way schemes can measure and report their climate risk”.

He acknowledged that understanding what constituted good practice in this area would be “one of the difficult issues going forward” but said “it doesn’t stop you starting that process now”.

The Pensions Climate Risk Industry Group, a group set up last summer by the Department for Work and Pensions, TPR and other government departments and involving industry, yesterday launched a consultation on draft non-statutory guidance for occupational pension scheme trustees on climate-related risks.

On a panel at the PLSA conference today, Gregg McClymont, director of policy and external affairs at The People’s Pension, referred to the pensions minister having been “very strong” on the role of pension funds and climate change and said he “flagged for further discussion” how well government plans for increased investment into roads, announced as part of this week’s Budget, fit with its wider climate change mitigation strategy.