Schroders Capital has found that the past performance of private equity funds could inform future returns. According to new research from the firm, this may be particularly insightful for certain parts of the private equity market going forward.

The research team comprising James Ellison, head of private assets data insights, Eufemiano Fuentes Perez, data scientist, and Duncan Lamont, head of strategic research said: ”[We found] that 36% of private equity funds that were in the top quartile for one vintage were also top quartile for the general partner’s (GP’s) next and  64% were in one of the top two quartiles. Only 16% dropped to the bottom.”

This is according to the researchers’ analysis of 3,512 private equity funds raised since 1980. Only GPs with at least two funds were included, and only funds with at least seven years were measured, as performance of younger funds is still fluctuating, they said.

The researchers said: ”Performance disclaimers repeatedly tell us that past performance is not a guide to the future and may not be repeated. And that is true. But is there a nuance to consider between public and private equity funds on this front? Our analysis suggests that the past performance of private equity funds may provide some useful information to help think about how they might perform in future.

”This is a very different picture to what we see with public equity funds. A recent study found that there was a greater chance that a public equity fund in the top quartile for one five-year period dropped to the bottom for the next, than maintained its standing.

Schroders’ research shows this holds strongly for funds investing in both North America and Europe, and for both buyouts and venture capital.

It also holds for funds investing in Asia, but not to the same degree of statistical significance – partly influenced by there being fewer funds in this category, which limits the conviction with which we can draw firm conclusions. 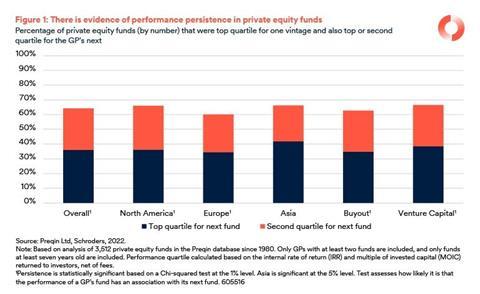 The researchers added: ”When we analysed funds by size, the results were striking. Good performance persistence is greatest among small funds, strong and significant among medium-sized funds, but weak among large ones. 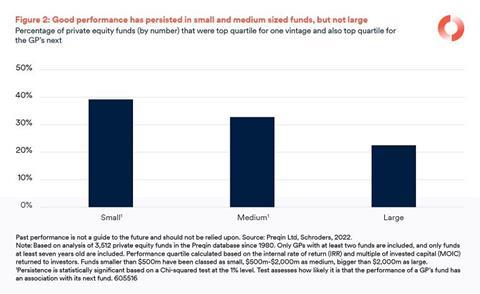 ”This is an important result for private equity investors, especially given that many allocate to large funds run by large managers. Poring over their past performance may be less worthwhile than you realise – the performance disclaimer was right all along. But it can be more useful when looking at the long tail of small and medium-sized funds which make up the bulk of the industry (in terms of number of funds).

”You should never make an investment decision based on past performance alone. But this suggests investors may not want to ignore it either.”

Schoders Capital used data from the Preqin Performance database for Private Capital for its research.