UK roundup: Survey points to annual ‘tax drag’ of up to £250m

UK defined benefit (DB) schemes are losing out on up to £250m (€273m) of additional income per year in their global equity portfolios by not investing via tax transparent funds or insurance policies for their pooled fund investments, according to analysis carried out by Northern Trust and The Asset Management Exchange (AMX).

The research was based on a survey of 120 DB plans, with the data then applied to the market (see diagram). According to the survey, 72% of schemes were using fund structures that were tax inefficient, including investment trusts and open-ended investment companies.

Northern Trust and AMX calculated that a total of £56bn was invested in less tax-efficient funds by UK schemes in 2019, which had led to lost income of up to £256m for DB pension schemes that year, or nearly £2.5bn over the next decade.

In a statement, the organisations said this loss that could be mitigated if the schemes used a tax transparent fund for their pooled equity investments.

Oliver Jaegemann, CEO of AMX, said: “In the current environment due to the COVID-19 crisis, many pension scheme trustees and their advisors are facing widening funding gaps, scheme sponsors in financial difficulty, and deliberations on re-risking their investment strategies. 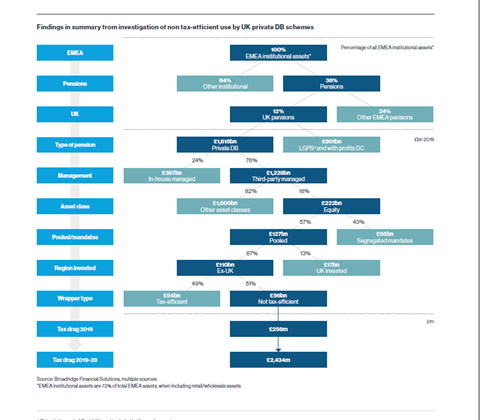 “This is an important time when DB pension schemes should be looking to take advantage of every revenue stream available to them.”

He likened missing out on the additional investment income to an “own goal”, and said pension schemes did not have to change their selected asset manager or investment strategy to switch to tax efficient fund structures for their pooled fund equity investments.

Clive Bellows, head of global fund services for EMEA at Northern Trust, said: “Similarly, asset managers that operate or are planning to launch equity-based European funds would do well to consider how the use of a tax transparent fund may benefit their investors.”

AMX is an “open architecture” service provider for asset managers, and is backed by Willis Towers Watson. It offers tax transparent equity vehicles on its platform for pension schemes in the UK and other countries

The pension scheme for a farmers’ cooperative has secured the benefits of all its 120 members via a £13m buyout with Legal & General Assurance Society.

The Superannuation Scheme for the Brandsby Agricultural Trading Association (BATA) was an existing Legal & General Group client, with Legal & General Investment Management having been appointed as its fiduciary manager in 2018.

Steven Clarke, chair of the trustees, said: “Crucial to the success of this transaction was the combination of having the governance structure in place to manage and opportunistically de-risk; alongside the ability to monitor live transactable buyout pricing and price lock the portfolio quickly and efficiently.”

LCP is predicting bulk annuity volumes to amount to between £20bn-£25bn this year, in part due to attractive pricing in the wake of the coronavirus pandemic. Passing the £24.2bn mark would make 2020 the second biggest year, after £43.8bn last year.

Feeding into the consultancy’s forecast is the view that small scheme transactions will increase by 25% this year as demand surges for streamlined transaction processes.

Established in 1894, BATA supplies agricultural and energy products to the rural community.

In October 2018, the UK’s High Court ruled that Lloyds Bank had discriminated against male members of its three DB schemes by effectively accruing them a lower pension benefit than they were entitled to under the GMP rules.

The ruling affects any pension scheme that had contracted out of the UK’s state pension scheme, requiring them to equalise for GMP benefits between men and women.

In the immediate wake of the ruling, consultants estimated that UK pension schemes faced a collective bill of around £15bn (€16.9bn) as a result of the ruling, but some companies have lowered their estimates of the cost to legacy pension benefits.

The High Court set out a range of methods that could be adopted to correct for the inequalities of GMPs accrued, but said it was up to trustees and employers of each pension scheme to decide what method was most appropriate for their scheme.

“GMP equalisation is complex, and needs to be done right”

RiskFirst said: “It has taken nearly two years for the industry to agree how to address this complex issue and develop member-level solutions.” .

It said it had sought feedback from existing clients of the PFaroeDB solution about various modelling approaches to determine the GMP valuation methodologies that are required to address consultants’ needs.

A spokeswoman said it was this, combined with the analytics tools already available via the PFaroeDB platform, that made the new GMP feature noteworthy.

Jonathan Conway, head of customer success at RiskFirst, said: “GMP equalisation is complex, and needs to be done right. DB pension schemes across the UK will be reassessing their methodologies and looking for advice on how to navigate this challenge.

“This provides PFaroeDB users with an excellent opportunity to consult with their own clients and support them through this change.”