Letter from US: ESG faces backlash in some US states over fossil fuels

Is there a backlash against the environmental, social, and governance (ESG) investing movement?

There are signs of dissent, after West Virginia’s treasurer Riley Moore said the state’s treasury investment board would no longer use a BlackRock fund. “The decision was based on recent reports that BlackRock has urged companies to embrace ‘net zero’ investment strategies that would harm the coal, oil, and natural gas industries,” Moore explained in January. 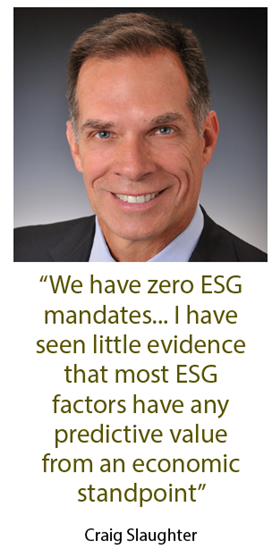 The coalition, representing more than $600bn (€530bn) in public assets, promises “to protect our states’ economies, jobs, and energy independence from unwarranted attacks on our critical industries”. Last September, a Texan law came into effect prohibiting state pension plans from investing with firms that boycott energy companies. The Texas comptroller’s office is preparing a list of firms to divest.

So far, it is not clear what impact such efforts will have on state pension funds. Rob Maxwell, spokesman for the Teacher Retirement System (TRS) of Texas, says: “To date, TRS has seen no new divestment list from the state comptroller’s office.”

TRS has $201.8bn in assets under management, compared with $165.4bn in the previous year; a 79.1% funded ratio; and 1.8m members. Its portfolio holds $45m in BlackRock shares, and BlackRock oversees roughly $2.5bn of stocks and bonds for the fund, as well as private equity and infrastructure, according to the latest public records.

TRS’s investment policy statement reads: “In making investment decisions, the investment division will consider ESG factors that are material to long-term returns and levels of risk… All investments must be made prudently and in accordance with fiduciary and ethical standards, without promoting interests unrelated to the portfolio’s stated objectives of controlling risk and achieving a long-term rate of return.” Maxwell says: “Our board of trustees is expected to receive a non-action-based update on ESG standards at the next board meeting.”

For the time being, the West Virginia treasurer’s action has had no impact on the state pension fund. “Note that our investment management board (IMB) is a separate entity charged with managing the state’s pension plans and various other assets and is, thus far, excluded from the application of the bill proposed by the state treasurer,” explains Craig Slaughter, director and CEO of the West Virginia investment management board that manages about $26bn.

Most of that – $21bn – is made up of nine defined benefit pension plans with funding ratios of 76% to 263%, and a total of about 180,000 participants. Slaughter became responsible for managing the investment management board in 1989.

“Before that, the treasurer’s office was in charge of pension plans,” recalls Slaughter. “They lost $300m

in operating accounts for various state entities, including pension plans. State leaders realised there was a mismatch between the short time horizon of the state’s political leadership and the ‘infinite’ horizon of a pension plan. So the two responsibilities were divided. We at IMB are apolitical.”

The result: the teachers’ fund, which is the largest one, went from 9% funded to the current 76%. “We have zero ESG mandates,” says Slaughter. “The problem with the ESG movement is that it wishes to impose a view regardless of economic value. I have seen little evidence that most ESG factors have any predictive value from an economic standpoint. As fiduciaries of pension plans, we do not have a right to impose a view on, for example, fossil fuels divorced from value and price. But well before the ESG movement we have been paying attention to governance issues, the most relevant ones regarding valuations.”

A similar approach is shared by Matt Clark, the state investment officer of South Dakota who manages the South Dakota Retirement System, one of the best-funded pension

Coalition of officials in 15 US states

“We have significant investments in fossil fuel equities and we also buy debt of fossil fuel companies. We think they’re attractive and they’ve been performing very well recently,” explains Clark, who has been with the system since 1984. “We understand there will be a transition to cleaner energy over the long term, but in the meantime we still need oil, coal and natural gas. If there is not enough investment in this industry, there will be shortages and further price spikes.”

The South Dakota system has always had a focus on governance. “But the ‘E’ and ‘S’ parts of ESG are believed to be best addressed by overall public policy as opposed to being led by managers of the pension investments,” stresses Clark. “Politically-driven investments may harm the affordability of cost-of-living increases for retirees.”