Letter From US: New Secure Act – a step in the right direction

“There is a lot of optimism in the US market about the impact of the new Secure Act on the retirement system,” says Clint Cary, head of US delegated investment solutions, Willis Towers Watson (WTW). Congress passed the Secure (Setting Every Community Up for Retirement Enhancement) Act in December thanks to a bipartisan agreement about the necessity of increasing financial security for older Americans.

In fact, the first important changes are new rules that encourage employers to offer annuities – which guarantee a monthly stream of income, potentially for as long as a retiree lives – in 401(k)-type retirement plans.

“Most DC [defined contribution]professionals believe that fiduciary risk associated with retirement income solutions is the number-one barrier to guaranteed-income product adoption,” says Bob Melia, executive director at the Institutional Retirement Income Council (IRIC). “The Secure Act takes that fiduciary risk concern off the table. By following the prescriptive safe harbour made available in the new law, plan sponsors are protected from liability for any losses that may result to the participant due to an insurer’s insolvency.”

Not all experts are enthusiastic about the changes. “Overall it’s a positive law, but it only takes small steps to tackle two big issues, coverage and drawdowns,” says Alicia Munnell, director of the Center for Retirement Research at Boston College. “For a 65-year-old retiree it can be very expensive to get an annuity. Instead, one of the best ways to get more annualised income is simply to delay claiming social security benefits. Another way is to buy a longevity insurance or advanced-life deferred annuity with benefits that start when the retiree turns 80.”

But according to IRIC’s research, annuities inside a DC plan are considerably lower in cost than their retail counterparts: a guaranteed minimum withdrawal benefit (GMWB) variable annuity offered by a typical insurance company on the retail side can have  all-in  fees at or above 3%; the same product offered by those same insurers on a DC institutional platform would have fees of about 1.5%.

The other big changes are about coverage. “Today only about 50% of the workforce is offered a 401(k) plan,” says Munnell.

The new law makes it easier for small companies to join together to offer 401(k) plans and share administrative costs using a multiple employer plan (MEP). Previously, MEPs were allowed only for businesses with some type of commonality such as common ownership or membership in the same association.

“Pooling resources will allow employers of all sizes to expand access, lower costs and add features while delegating fiduciary responsibilities to a third party,” says Cary. “Even small employers must compete to attract talent. Joining a MEP, they may offer innovative products such as more personalised TDFs [target date funds] as default investment options, instead of the same TDFs for all the same age employees.”

Andrew Kligerman, an analyst who follows the life insurance industry at Credit Suisse, expects the new MEP rules to expand the $5.84trn (€5.3trn) 401(k) market by $1trn within about five years.

Munnell is less certain. To tackle the coverage issue, she would have liked more radical solutions such as imposing automatic enrolment in a kind of pension plan for all employees. “My concern,” she explains, “is that, for decades, small businesses have been able to sponsor plans at very cheap costs, but they didn’t do it. Most of them have volatile cashflows and their employees prefer cash. So I don’t think that the new rules will have a big impact.”

More optimistic is Neil Lloyd, head of US defined benefits and financial wellness research, at Mercer. “The open MEP concept will, over the longer term, have a material impact on the 401(k) market,” he says. “But similar situations have suggested that the initial impact may be more subdued. What may have a far bigger impact in the shorter term is the fact that 401(k) plans are increasingly trying to encourage retirees to stay in the DC plan when they retire. The lifetime income provisions in the Secure Act will reinforce this idea.” 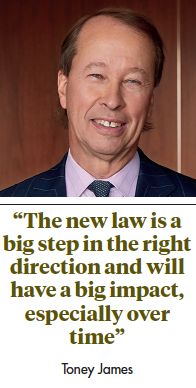 “The new law is a big step in the right direction and will have a big impact, especially over time,” says Tony James, co-author of the book ‘Rescuing Retirement’ and executive vice-chairman of Blackstone. But he still sees shortcomings: “People who are not enrolled in 401(k) plans usually work for mom and pops, very small businesses that don’t have incentives to enrol their employees in a pension plan. You need to give them either positive incentives such as fiscal credits if they do it, or negative ones such as penalty fees if they do not. Another problem that is not solved by the Secure Act is the lack of auto portability; the retirement accounts should be linked only to the employee to make it easier changing jobs.”