Even six months ago it looked like crypto investing was not going to become mainstream any time soon in 401(k) plans – and since then Bitcoin has halved in value. But the market’s sentiment and trend are changing very quickly. So much so that Fidelity Investments has now become the first major retirement-plan provider to allow investors to add a Bitcoin account to their 401(k). The move was announced in late April.

Fidelity’s new digital assets account will allow individuals to invest a limited portion of their retirement 401(k) savings in Bitcoin.

“As part of our ongoing communication with our plan sponsor community to discuss how to improve the retirement savings efforts for their employees, Fidelity has seen growing interest from plan sponsors in providing their employees access to digital assets in defined contribution plans,” Dave Gray, head of workplace retirement offerings and platforms at Fidelity Investments, tells IPE.

Boston-based Fidelity administers plans with more than 20 million participants and $2.7trn (€2.6trn) in assets under administration. The firm also has a growing presence in the cryptocurrency business. It began its exploration of blockchain technology in 2014 with Bitcoin mining and in 2018 launched its first commercial offering in the form of Fidelity Digital Assets, a platform that offers custody and trade execution for digital assets to institutional investors. 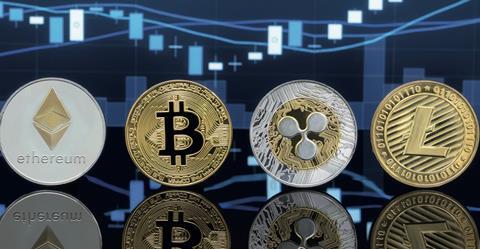 Given the size of Fidelity, its move is very relevant and has raised concerns at the US Department of Labor (DoL), which regulates company-sponsored retirement plans. Last March the DoL published a compliance assistance release (CAR) cautioning employers to “exercise extreme care before they consider adding a cryptocurrency option to a 401(k) plan’s investment menu”, a department news release said.

This elicited a firm response from Fidelity.

Gray comments: “Fidelity has been engaged with the DoL regarding the availability of digital assets in 401(k) plans and wrote to the DoL in response to the CAR.

“We respectfully requested that the department withdraw the CAR and/or issue further guidance clarifying first of all that it is not per se imprudent for a plan fiduciary to designate a cryptocurrency or any other investment option for inclusion in a 401(k) plan.”

Fidelity also wants to understand how the risks the DoL identified in the CAR vary among the various types of cryptocurrency investments to which the CAR applies.

So far, no other major retirement-plan provider has announced that it will follow Fidelity’s example. Only about 2% of the 63 employers in a recent Plan Sponsor Council of America poll said they would consider adding cryptocurrency to their 401(k) menu.

“We believe that cryptocurrency is here to stay and that crypto access on the 401(k) is inevitable, because a prudent allocation to cryptocurrency can improve diversified portfolios,” says Jeff Schulte, CEO of ForUsAll, a 401(k) provider that serves over 65,000 participants across more than 450 plans, with $1.6bn assets under management. Last year, ForUsAll announced it would offer access to a range of cryptocurrencies in its 401(k) via its self-directed cryptocurrency window. Schulte says the firm has over 120 plans on the waiting list to take advantage of this offer and is in the process of rolling it out to all of its customers.

Indeed, Fidelity’s move indicates that 401(k) investors want crypto access, and that the demand from plan sponsors is real and rapidly gaining momentum, according to Schulte. He adds: “For crypto to become a common investment approach in a diversified portfolio, we believe access needs to be provided prudently and safely for 401(k) investors.”

But crypto is risky, Schulte admits, and Bitcoin has halved in price since early November.

ForUsAll allows workers in plans it administers to invest only up to 5% of their 401(k) contributions in cryptocurrency. In addition, all participants will receive guidance on the risks of cryptocurrency and must pass an interactive questionnaire to demonstrate their understanding of crypto investments before being able to access the self-directed cryptocurrency window.