Pension funds and other private pension plans in OECD countries held $38trn (€32trn) of assets at the end of 2016, the highest level ever, according to the think tank for the world’s developed economies.

Around two-thirds of these assets were in the US, although funded and private pension arrangements continued to expand in countries such as Australia, Canada, Denmark and the Netherlands, the OECD said in a report.

In the latter four countries pension assets exceeded the size of the domestic economy, reflecting a trend over the last decade of pension asset growth outpacing that of GDP in most countries.

Private pensions have expanded the fastest in Denmark and Netherlands over the past decade, according to the OECD, with increases of 73 and 64 percentage points of GDP, respectively, between 2006 and 2016.

The OECD also said pension providers achieved positive real investment rates of return, net of investment expenses, in 2016 in most OECD and non-OECD countries.  Net real return was more than 2% on average.

Annual returns were also positive over the past decade in most countries, according to the report. The highest average annual real investment rates of return (net of investment expenses) were observed in the Dominican Republic (6.3%), Colombia (5.8%) and Slovenia (5.2%).

The 2017 version of the OECD’s annual report on pension markets covered 85 countries.

For the first time it covered insurance companies and other pension providers in addition to pension funds. Previous editions had only focused on pension funds “for reasons of data availability”, according to the OECD.

Assets in funded and private pension arrangements in 2016 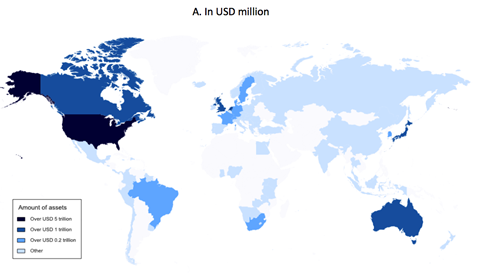 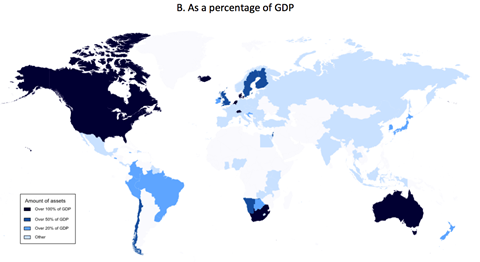 Source: OECD Global Pension Statistics. Methodological notes at the end of the report, which can be found here.