It has become almost universally accepted that the US and China are in the midst of a trade war – the term has long ceased to be written with inverted commas around it.

Yet there are good reasons to question whether it is an accurate description of the growing rivalry between the two global powers. The process unfolding before our eyes is arguably something far more serious.

It is blindingly obvious that there are tensions between the US and China over trade, but there is a subtle – though crucial – difference between that observation and declaring the existence of a trade war.

Many observers are too fixated on the minutiae of trade tariffs to see the bigger picture. They fetishise trade, treating it as having its own intrinsic power rather than thinking more broadly about unfolding developments.

What the world is witnessing is not a trade war but the start of a battle for global dominance. The rise of China, from a rural backwater in the late 1970s to arguably the world’s largest economy, is destabilising international relations. This is a structural reality rather than the result of a conscious plan for world domination by the Chinese leadership.

The US understandably feels threatened by this development. For decades its position as the world’s leading power was beyond dispute. Now it is being called into question.

Many pre-eminent international organisations were created on the premise of US dominance, including the International Monetary Fund (IMF), the United Nations and the World Bank. Now they are increasingly looking unfit for purpose.

Early signs of this were already apparent a few years ago when China established the Asian Infrastructure Investment Bank. Beijing had grown fed up with what it regarded as the West’s attempts to thwart it playing a leadership role at the World Bank commensurate with its economic weight. 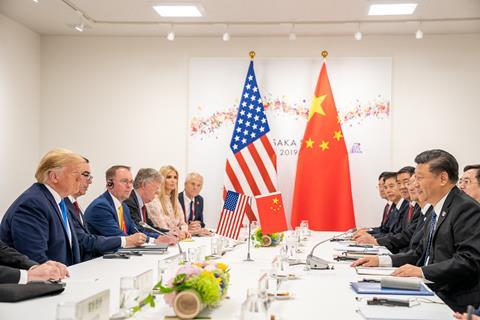 There are some who have put US-China rivalries into a broader context. Graham Allison, a Harvard professor, has received a lot of attention for what he has called Thucydides’s trap. This refers to the classic work by an Ancient Greek historian on how the fear instilled in the powerful city state of Sparta by the rise of Athens led to the Peloponnesian War.

Allison goes on to argue that, in 12 of the 16 cases of a rival power facing an incumbent over the past 500 years, the outcome was a war between the two. However, there is hope this time around because in four of his examples it was possible to avert military conflict.

Yet the implications of this insight go much further than generally realised. To understand the significance of recent developments, three key points should be borne in mind:

This is not a trade war. If anything, the battle over trade, and indeed over currency now too, should be seen as only a small part of intensifying international rivalries.

Donald Trump is not the main driver of the current US-China conflict. It is true that the current US president adds his own impulsive and idiosyncratic edge to the rivalry, but it is notable also that Trump has solid backing from Republicans and Democrats in relation to the conflict with China. It is one of the few things on which they agree. The entire US elite feels deeply threatened by China’s rise.

Europe too is becoming embroiled in great power conflict. The rise of China destabilises the relations between all the international powers. It is striking that the EU’s share of global output has fallen from about 30% in 1980 to about 15% today, according to IMF figures. Europe’s struggle to maintain its position in the world is already leading not only to greater tensions with China but more conflict with the US.

No doubt alliances will shift in unpredictable ways, but international relations cannot continue to operate within the framework created after the second world war.

I will examine growing US-European tensions in more detail in the September issue of IPE.