2
Bulgaria: Can investors rely on pensions?

Bulgaria: Can investors rely on pensions?

Defined contribution (DC) pension schemes – both occupational and voluntary – are being increasingly called for to supplement public pension provision. But, will they deliver?

Pensions from a DC scheme are dependent on the capital, accumulated before retirement.

The European Commission, through its regulatory body, the European Securities and Markets Authority (ESMA) has requested that European Supervisory Authorities (ESAs) report on the costs and historic performance of retail financial products, including pension products.1

Here, we report on the past performance and costs of the two main categories of Bulgarian pension funds in the trailing one, three, seven and 10 years to 30 September 2018.

We first calculate returns. Next, we construct a benchmark to evaluate the pension funds’ total return. In the third section, Investor return will be broken into three components: investor real return, inflation and fees and charges, in accordance with the European Commission request to ESAs and following the ESMA approach2. It will conclude on the basis of results over the longer periods as they reflect market cycles better. 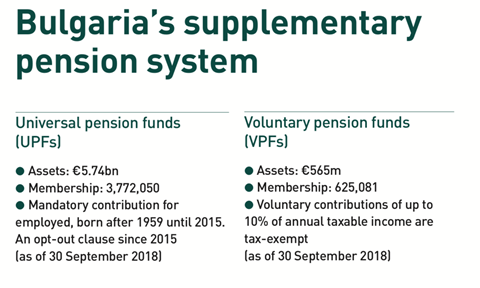 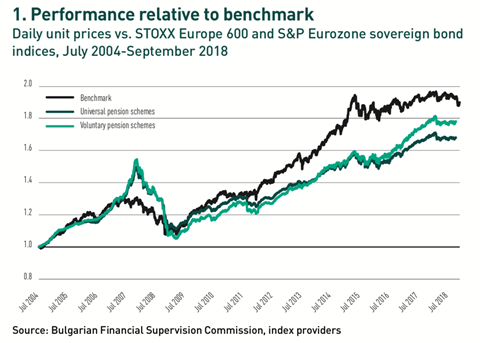 These calculations allow for evaluation of the total return against a benchmark and decomposing returns into fees and charges, inflation and real investor return. 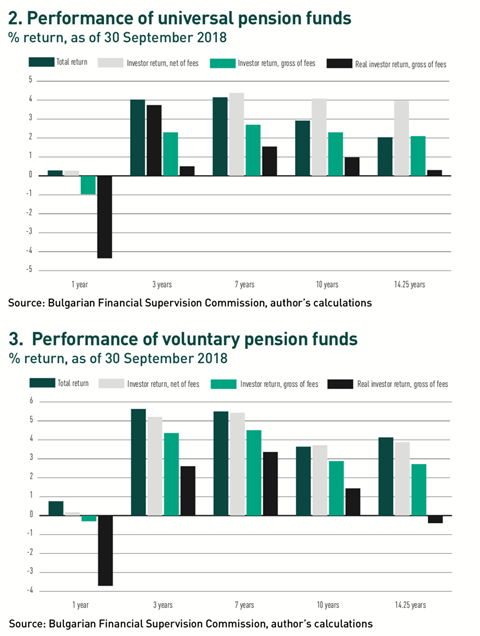 Evaluating pension funds’ performance requires a benchmark comparison. Since Bulgarian pension companies do not report against benchmarks, a simple one has been constructed, blending 35% European equity, represented by the Stoxx Europe 600 index and 65% euro-zone government bonds, represented by the S&P Eurozone sovereign bond index. This allocation is consistent with the investment constraints imposed on domestic pension funds by law.3 It is to be expected that actual pension funds’ performance will deviate from the benchmark, as funds invest in:

● Additional asset classes such as corporate and municipal bonds and real estate;

● Securities of Bulgarian issuers not represented in the benchmark.

Thus, the benchmark is less risky than pension fund portfolios as it avoids credit risk, inherent in corporate and municipal fixed income securities as well as Bulgarian country risk. Nevertheless, the comparison is illuminating as the benchmark is investable and its performance could have been obtained by investing in only two ETFs.4

While pension funds have exhibited higher recent nominal returns compared to the benchmark, they are trailing it in the last 10 and 14 years (since 1 July 2004). Therefore, over the long term, pension savers in Bulgaria have received below market risk-adjusted returns in both categories of pension funds – universal (UPFs) and voluntary (VPFs). 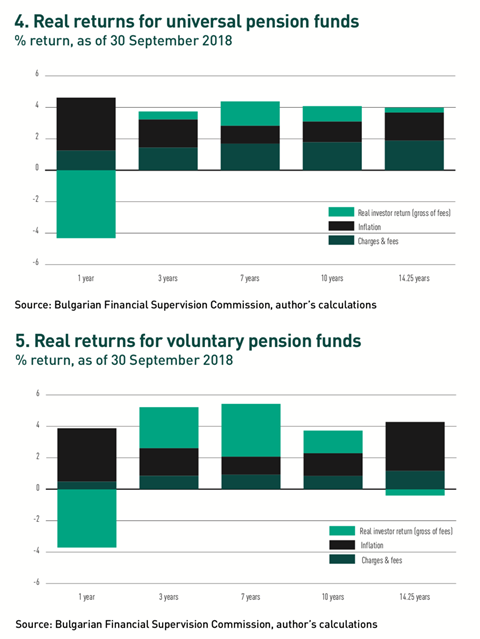 In the year to 30 September 2018, pension savers suffered a substantial real loss in both the universal and voluntary pension funds as nominal returns were insufficient to cover costs and inflation.

Over the three and seven-year periods, savers in voluntary pension funds fared better as they received 50-60% of the pension funds’ returns with the remainder 40-50% covering costs and inflation.

Pension funds seem to work well for shareholders and executives who are pocketing the fees, leaving investors with paltry, if not outright, negative real returns.

Results over the longer time periods are more informative as they capture better the market cycle. While pension funds’ returns have averaged 2-4% annually, pension savers have received small real returns as the bulk of the return covers costs and inflation. Savers in UPFs have seen the purchasing power of their contributions preserved, while savers in VPFs have lost a real 0.4% annually over the last 14-and-a-quarter years. If this performance persists, pension savers in Bulgarian defined contribution schemes cannot rely on supplementing their public pensions in a meaningful way through private sector alternatives.

Lubomir Christoff, PhD, ChFC, is a member of the Securities Markets Stakeholder Group of the European Securities & Markets Authority