Ilmarinen, Finland’s second-largest private sector earnings-related pension provider is to merge with its smaller rival, Etera, in January 2018. Timo Ritakallio, Ilmarinen’s CEO, is leading the merger of the two firms until he moves on to become the CEO of OP Bank next March.

Ilmarinen’s €38.9bn assets and Etera’s €6.2bn will be combined into a single portfolio from January 2018. Asset class exposure from then on will be dictated by Ilmarinen’s existing investment strategy.

“The central task now is to transfer investment data into one system and then modify the whole portfolio so that it will comply with Ilmarinen’s investment strategy,” Ritakallio says. Ilmarinen is using a global consultancy to integrate the data systems of the two businesses, he adds.

According to Ritakallio, Ilmarinen aims to save some €20m annually through the merger from the direct and indirect costs of its investment activities. “The measures that will be taken will be clarified over the coming months,” he says, noting that the post-merger management team will continue with just seven staff and the CEO.

As both Etera and Ilmarinen have seven-member management teams working under their CEOs, seven senior staff will lose their positions. In early November it was confirmed that Mikko Mursula, currently Ilmarinen’s CIO, will continue as executive director for investments at the combined entity. Stefan Björkman, Etera’s CEO, will serve as deputy CEO alongside Sini Kivihuhta, Ilmarinen’s existing deputy CEO. It is not clear who will take up Ritakallio’s own role as the CEO after he moves on to OP Bank in March.

“Although a person might no longer be part of the management team, they could still continue working at Ilmarinen in a less senior position, so the result of this reorganisation is not necessarily termination of their employment at the fund,” Ritakallio explains.

Some other staff at Ilmarinen and Etera will also be terminated but no numbers have yet been published. 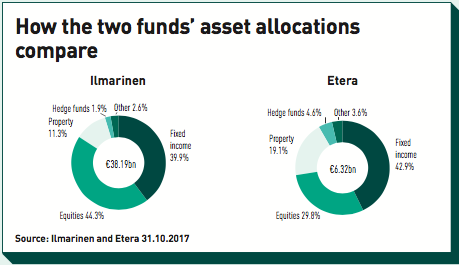 Ritakallio implies that the merger is likely to also mean fewer external managers will be needed.

“It is good to remember that at Ilmarinen the proportion of assets managed in-house has been clearly higher than at Etera. There are no plans to change this way of functioning at this stage,” he says.

The most notable difference in the investment strategies of Ilmarinen and Etera, in addition to the share of assets managed in-house, is their exposure to equities. Ilmarinen had invested some 44.3% of its assets in equities over the third quarter of 2017, whereas Etera’s allocation was 29.8%. The reason for the difference is partly that the two companies have different risk-bearing ability, Ritakallio explains.

Post-merger, listed domestic equities will continue to account for some 25% of the portfolio, so there will be no impact on the Helsinki Stock Exchange, Ritakallio notes.

Etera has also had a much higher exposure to property, at 19.1%, than Ilmarinen’s 11.3% over the third quarter of the current year. However, Ilmarinen plans to increase its property exposure to 15% of all assets in the medium term, says Ritakallio.

Ilmarinen plans to gradually increase its exposure to real assets – including property and infrastructure – and reduce the share of fixed income in its portfolio, currently at 39.9%. It is particularly interested in increasing the international real estate investments in its €4.4bn property portfolio, which currently make some 16% of its property holdings.

In 2016, Ilmarinen invested in office complexes in Amsterdam, Frankfurt and Berlin and in October this year it agreed on a strategic partnership in US real estate investments with New York Life,

the largest mutual life insurance company in the US. The joint venture of which Ilmarinen owns 49%, will become a long-term investor in US commercial property.

The first investments of the venture include six office properties in Boston, Washington DC, Charlotte, San Francisco, Los Angeles and Orange County. The combined value of the portfolio is about $620m. The goal is to roughly double the volume of the joint venture’s real estate investments in the coming years.

“The properties purchased represent a geographically diversified portfolio in growing metropolitan areas on both the east and west coasts of the US. Our investments will focus on office properties that are technically sound and functionally modern, with good occupancy rates,” says Mikko Antila, Ilmarinen’s portfolio manager in charge of international real estate investments.

In early November this year, the firm also expanded its real estate investments in the UK by acquiring a 50% share in a new office property in central Manchester.

Antila does not expect the Brexit negotiations to have any significant impact on the office market in central Manchester. “Manchester’s population is growing and its economic outlook is positive,” he said in a press release announcing Ilmarinen’s property moves.

Domestic commercial and residential property will play the most important role in the fund’s property holdings in the future as well. Today, Ilmarinen owns some 3,600 residential flats and about 100 business, office, storage and other premises. Etera owns similar residential and office properties. “The merger makes Ilmarinen the largest property investor in Finland,” Ritakallio concludes.