The UK government has proposed collective defined contribution schemes. The model is gaining traction after an initially lukewarm response

A consultation exercise on collective defined contribution (CDC) schemes run by the Parliamentary Work and Pensions Select Committee closed a year ago with a lukewarm response.

But the Department for Work and Pensions (DWP) can feel more upbeat about its most recent proposals.

Last time, only 36 entities – with a number of ‘names’ conspicuous by their absence – made submissions to the committee, and reaction was mixed. However, the DWP proposals published last November have garnered a warmer reception from consultants, actuaries and asset managers, at least in principle.

The advantages of CDC schemes have been well-rehearsed. On retirement, members are paid a pension which should be higher and more predictable (a target is set) than what they would receive from an individual defined contribution (DC) plan.

The member bears less risk, in terms of longevity and investment risk. And because assets are pooled, members can access more illiquid investments than through an individual pot.

For employers, the big positive is that they are not liable for deficits, as under a defined benefit (DB) scheme; their sole commitment is to pay an agreed rate of contribution.

Kevin Wesbroom, senior partner at Aon, reflected industry support when he said, as the company submitted its response: “We firmly believe that CDC plans can improve retirement outcomes for many UK workers via collective investment by professionals, not members; by having benefits expressed in income terms not capital accounts; by the pooling of longevity risk; and by individuals not having to buy an annuity at poor times in the market.”

However, CDCs also present risk.If the target pension is not achieved, the member has no recourse to the employer to fund the shortfall. The level of pension could therefore be lower than expected, there may be no annual indexation and the amount paid may vary year-on-year.

In the Netherlands – widely seen as the CDC template to follow – some large schemes have not paid inflation-linked bonuses for several years, and face reducing member benefits if funding levels do not improve substantially.

In its consultation document, the DWP addressed topics which included:

● risk-sharing and intergenerational issues;
● whether CDC members should be allowed to transfer out in the decumulation stage;
● requiring CDC schemes to publish their rules for calculating and distributing member benefits, and communicating the risk of benefit reductions to members;
● whether CDC schemes will need sufficient scale to pool longevity risk across the membership; and
● trustee duties and requirements.

The consultation included a series of questions for the industry in an attempt to frame responses. 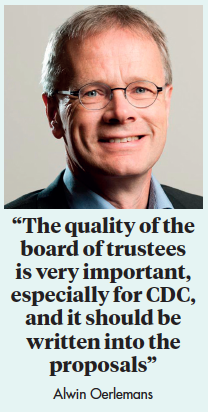 The proposals have followed months of campaigning, led by Royal Mail and the Communication Workers’ Union (CWU). The two parties agreed a CDC framework to replace the employer’s defined benefit (DB) scheme and have since lobbied for appropriate legislation, since their model is not permitted under existing rules. New primary and secondary legislation will need to be enacted.

Regulationary hurdles
One debate has been whether such schemes warrant more stringent requirements in respect of trustee knowledge and understanding (TKU).

The document says: “We take the view that the current TKU requirements in respect of trustees of occupational pension schemes, alongside general trust law, should be sufficient,” although it adds: “We are minded that as part of the authorisation process, The Pensions Regulator will consider the collective expertise and experience of persons acting together in the capacity of trustees.”

The Institute and Faculty of Actuaries (IFoA) says: “The Pensions Regulator should be given relevant powers to apply appropriate scrutiny and intervene if it suspects the scheme has become unsustainable or there are issues with its governance.”

It also warned that the governance process for determining the valuation assumptions and pension increases needed to be well designed to ensure equitable outcomes.

Alwin Oerlemans, chief strategy officer at APG, who wrote the pension provider’s submission to the previous DWP consultation, says: “The quality of the board of trustees is very important, especially for CDC, and it should be written into the proposals. Regulation plays an important role, so that board members are really tested by the supervisor on their knowledge and competence for the position. Diversity within the board is also important.”

Oerlemans also underlines the importance of transparency and communication with members.

“In the Netherlands, participants have their own dashboards where they can see what rights they have accrued,” he explains. There is also a financial planning tool so they can understand the implications of choices such as early retirement.

“Every effort must be made to ensure that members understand the risks and advantages of the scheme they are in,” it said. “It should be clear that benefit levels are not guaranteed.”

Meanwhile, the Association of Consulting Actuaries (ACA) has expressed support for CDC, but highlighted the importance of the investment strategy to its success.

Brian Henderson, partner and director of consulting at Mercer – which also made a submission to the DWP – points out other potential problem areas.

“The consultation proposes one particular CDC design, but CDC can be achieved in many different ways,” he says. “By being so restrictive, the government risks closing down the opportunity for creative thinking and innovation in the pensions market, such as not permitting decumulation-only CDCs, and not allowing smoothing.”

Distinct from individual DC
Henderson cautions against considering CDC in the same bucket as money purchase, since their operation, aims and outcomes are intended to be different.

He says: “Money purchase benefits depend solely on the contributions that members pay or that are paid into the scheme on their behalf, resulting in a ‘pot’ of money which is used to purchase benefits; this will clearly not be the case for CDC.” 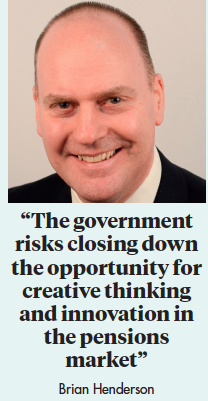 And he warns that DWP and the UK tax authority HMRC need to work together to create a workable framework.

“There is a risk that HMRC will be behind the curve,” he says. “This could make it difficult for CDC schemes to pay benefits out, because authorised payment regime, and annual allowance and lifetime allowance checks need to work.”

But there are those who consider that tackling specific problem areas within CDC will not be enough to make it a workable pensions vehicle, in the short term.

David Blake, director of the Pensions Institute at the Cass Business School, says: “My feeling is that there will unfortunately not be much take-up. CDC has had a past, although it should have been introduced ten years ago before the total collapse of DB.”

He continues: “It might well have a future – after two generations of retirees have lived in poverty and someone says ‘something should be done’. But it does not have a present: companies have not yet unwound their DB liabilities fully, and this is taking a huge amount of management time.”

He adds: “There are also just too many other government initiatives to deal with, such as dashboards. And there is no demand from employees, who have very little understanding of their pensions in any case.”