How we run our money: Publica 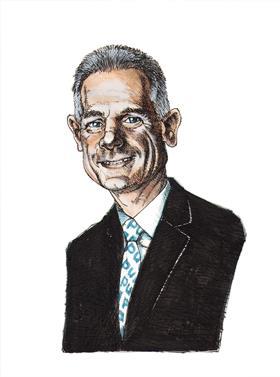 The document detailing Publica’s investment beliefs states that “asset management is a science and an art”. It is an appropriate summary of the way the Swiss pension fund is run.

Publica is Switzerland’s largest institutional investor and among the 50 largest in Europe, with total assets of CHF37bn (€30bn) at the end of 2014.

The fund is an independent collective institution that manages the assets of 21 Swiss public pension schemes, seven of which are closed to new entrants. Its clients are the organisations run by or affiliated with the Swiss Confederation.

Patrick Uelfeti, Publica’s deputy CIO, describes the fund’s approach to asset management as simple, functional and transparent, one where both scientific thought processes and strong sets of investment beliefs come into play.

The purpose of this comprehensive investment ‘philosophy’ is to build a portfolio that allows the fund to make an efficient allocation of the risk budget, to incorporate the big macro trends and “to sleep well even in difficult times”, says Uelfeti.

“It will never be a portfolio that is aggressive and outperforming when markets are booming. Rather, it is one that, when things are difficult, should be able to withstand even strong headwinds.”

Publica’s strong focus on managing risk is perhaps one of the reasons why the returns for last year were lower than other Swiss pension funds.

The fund returned 5.87% in 2014, compared to an 8% average return of Swiss pension funds as estimated by Credit Suisse, UBS or Swisscanto.

This underperformance is explained by several factors, not least the fund’s strategic decision to hedge 100% of its G10 currency risk.

The hedging strategy, in turn, meant that the portfolio was not directly exposed to losses caused by the recent appreciation of the Swiss Franc, following the Swiss National Bank’s decision to abandon the peg with the euro.

An allocation to commodities in the open plans, which stood at 4% at June last year, also affected the performance. Uelfeti says the investment committee discussed whether there is still an economic rationale for investing in commodities given that the roll yields are not positive. On the other hand, commodities are a diversifier to the overall portfolio. Publica decided to keep an allocation in commodities, but reduced it from 6% to 4% at the beginning of 2014.

But Uelfeti adds that one of the reasons Publica lagged behind its peers last year was because it has developed a strategic asset allocation that is significantly less home-biased than its domestic peers.

As of June last year, Publica allocated only 3% of the open plan assets to Swiss equities, while 6% was invested in Swiss government bonds and 7% in real estate.

The ALM studies are the starting point for the design of the strategic asset allocation, which are carried out every two years for the open plans and reviewed each year for the closed ones with the support of Ortec Finance.

Following the ALM process, the board then decides what percentage of the assets should be allocated to each strategic asset class. However, the asset management team has a degree of freedom to change the allocation dynamically on the basis of tactical considerations.

The team, Uelfeti explains, uses tactical bandwidths to react to abrupt changes in the economic outlook and improve overall risk-adjusted results. It meets at least every month to review the tactical asset allocation.

The bandwidths are fixed but there is flexibility – subject to special permission from the investment committee – to adjust the tactical allocation beyond the limits, in order to protect the portfolio in case of extremely adverse market movements.

In parallel to the traditional ALM model, says Uelfeti, Publica has been looking for looking for new asset classes, using a systematic rules-based approach.

The fund has used this approach over the past few years to branch out into less traditional asset classes. It consists of analysing asset classes according to a set of quantitative and qualitative characteristics – science and art, perhaps. As well as observing data such as return, volatility, liquidity and cost, the asset management team will also formulate judgments over a number of factors.

Such factors include transparency, complexity, regulatory stability and reputational risk. But the most important of these factors, adds Uelfeti, is the economic rationale.

He says the board will not consider investing in an asset class, even if it performs well, when there is no strong economic basis that explains the performance.

At the moment, the fund is starting a review of the ALM for the closed plans, and will carry out a new ALM study for the open plans in the second quarter of this year. By the end of the year, the design of the strategic asset allocation will be complete and implementation will follow throughout 2016.

The implementation of the investment strategy is key for Publica, partly because of its size. Uelfeti says that the fund seeks to avoid any operational shortfalls and to keep implementation risks to be as low as possible.

This means that implementing a new strategy can be spread over several months, with new gradual adjustments made every month. In 2014, when the fund reduced its equity exposure, it did so in small steps of 0.5% every month.

“This way, we can spread the timing risk,” says Uelfeti. “Also, we divested from the equity markets in small steps because we did not want to have any market impact, since the volumes can be quite large.”

Following the results of the ALM studies carried out in 2013, Publica’s aim throughout last year was reducing exposure to equity risk and finding additional risk premia.

The decision to scale down equity holdings last year may seem untimely now, although Uelfeti explains it was based on a view that equity returns would be lower in the medium term.

“We have to go one step back,” says Uelfeti. “The decision based on the previous ALM study had been to increase equity risk substantially. That paid off very well from 2012 to 2014, which was a good time for equities.

“But looking at the risk factor attribution of the portfolio at the end of 2013, 70% of the risk came from equities. At the time, the risk-return expectations from the equity markets were no longer attractive. Therefore, we wanted to decrease that dependency on equity risk.”

The deputy CIO explains that part of the assets released from the equity bucket were invested in lower-risk fixed income, especially government bonds from industrialised countries, including UK, US, European and Canadian government and inflation-linked bonds.

Uelfeti surmises: “As far as the upcoming ALM study is concerned, it is hard to say what the outcome will be. The equity markets still look strong, but we are not convinced that the prospects are particularly good. The decision-making process is not only based purely on the quantitative ALM model. It is also the result of an intense discussion with the investment committee.”

The fund is also using its own internal capacity to build a private debt portfolio. Uelfeti explains that the process is taking quite some time, because of the difficulty of researching the most attractive opportunities and taking care of the implementation process.

Early on the team decided to focus on private infrastructure debt and private placement opportunities in the investment grade corporate credit space.

“Once the investment committee has agreed to add the asset class, then our work in the asset management team starts,” explains Uelfeti. “We want to understand the asset class: how it works, who are the major players, how you can invest in it. Implementation in particular is the most difficult part, especially if it is a non-standard asset class. The process takes quite some time.

“We thought infrastructure private debt and corporate credit private placements would make the most sense in the portfolio, both in terms of investment rationale and given our views of where the market is going.”

Uelfeti explains that private debt satisfies Publica’s thirst for additional risk premia – not just because of its illiquidity characteristics, but also for its sheer complexity as an investment. “Private debt is not an easy market to enter. The idea is to extract some premium from complexity as well,” he says.

This may seem at odds with one of Publica’s stated investment beliefs, according to which the fund aims to build an overall portfolio that is simple, as well as functional and transparent.

But Uelfeti says that adding complexity is a conscious act. “Each time you add an asset class, the portfolio becomes more complicated. Complexity has increased over the past few years, also due to developments in the market.”

Simplicity, continues the deputy CIO, in particular means that the portfolio needs to be transparent.  The fund has full transparency on all securities in the portfolio and a modular approach consisting of building blocks. “Each investment class has to fit into the framework of the overall portfolio,” Uelfeti says. “That is what I mean by simplicity.” 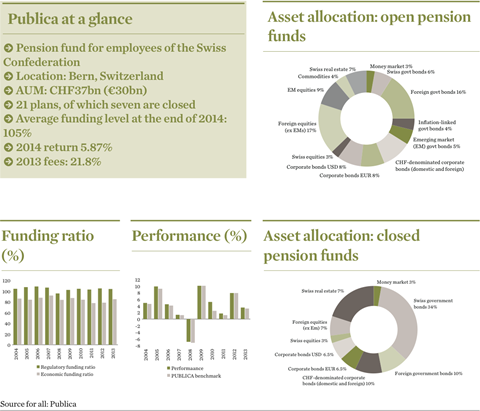 Another main pillar of Publica’s belief system is that it is too hard to find asset managers that can deliver alpha on regular basis. This has been a theme over the few past years and has led the fund to develop and implement a factor-based approach for equity investments.

Uelfeti clarifies: “It is not that we think there are no good active managers out there. But we believe that it is very difficult to select those that are adding extra returns after costs in a consistent way. We do not think that we would be allocating our resources well if we were trying to do that all the time.”

The deputy CIO asks whether it is ultimately possible to separate the managers that outperform because of their skill from those that they are harvesting one of the factors that can be replicated through a factor-based strategy.

So far, the performance of the alternatively indexed equity investments has been satisfactory, says Uelfeti. “We need at least a few years to analyse the live performance of these customised indexes. But we believe, on a risk-adjusted basis, that we will perform better than the traditional market-cap weighted indexes.”

Even in this area, Publica focuses on the implementation process, placing emphasis on the independence of the index provider versus the manager to avoid potential conflicts of interest and to achieve full cost transparency.

According to Uelfeti, Publica’s overall investment strategy reduces costs and as well as offering transparency to clients. The fund discloses 100% of its costs, in compliance with Swiss regulatory requirements.

Uelfeti also notes, based on an international study from the Canadian consultancy CEM benchmarking, that Publica is “on the low cost side” compared to a European peer group of investors with similar portfolios, thanks to a largely rules-based implementation strategy and the absence of private equity and hedge fund investments. In an age of increased scrutiny of public pension funds, Swiss taxpayers will be thankful for this.