Counting on the krona

Fine-tuning risk is important to Erik Callert, chief investment officer of the Swedish life and pension provider SPP Livförsäkring. He joined the insurer from Handelsbanken Asset Management in the spring of 2008 and worked his way from head of asset allocation to head of investments and then to his current role. He recalls how his arrival coincided with a shift in investment strategy caused by the financial crisis.

The CIO says the change in emphasis following the credit crisis saw a greater importance placed on liability-driven investment – not that the insurer neglected its liabilities in the years prior. “Five to six years ago, we had a more traditional portfolio for our guaranteed products,” he recalls. “We had a lot of equities, about 40% equities, and we had just one portfolio of quite low duration bonds, mostly, government and Swedish mortgage bonds.

“That was traditional, and all companies had, essentially, the same portfolio,” he continues. “We had one traditional portfolio and the hedging activities separate from that.”

The post-2008 shift towards liability-driven investment introduced into the portfolio what Callert regards as a “self-hedging asset allocation”, reducing equity exposure in favour of various fixed income holdings that align better with SPP’s interest rate exposure, extending the average duration of bond holdings and offering greater diversification of risk – a key element under Solvency II.

“Before 2008, we had about 90% of risk stemming from equities. Now, we have more risk parity between equities, credit risk and real estate risk – overall, a better diversification of risks.”

The revised investment policy resulted in a shift away from the previously traditional one-portfolio strategy to a more dynamic approach with four different portfolios in place at SPP. Callert says: “we can fine-tune risk between different types of clients who have varying degrees of risk appetite”. 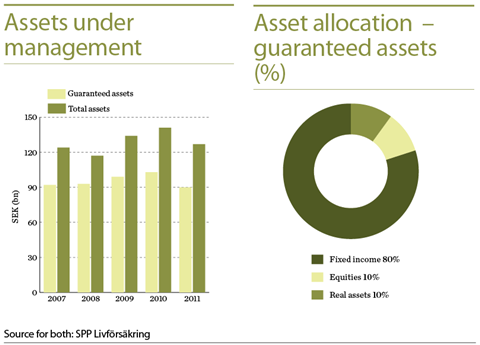 The four portfolios, globally invested with a home bias, reduced equity exposure to 10%. Despite the reduced holding, he says an emphasis on domestic equity remains, with around one-third of the 10% allocated to Swedish listings. The home bias does not end there. “We also don’t hold foreign government bonds, only Swedish government bonds, which we use more for collateral on our swap portfolio.

“We don’t see government bonds as a strategic asset class; that’s more an administrative position,” he adds. “We only have a small exposure to foreign currencies. Because of the capital requirements associated, you don’t seem to get any extra return for taking that kind of risk.”

This also eliminates much of the need to hedge based on non-domestic benchmarks, such as the EURIBOR or LIBOR exchange rates, says Callert, who stresses the predictable and stable nature of the insurer’s liabilities.

The Swedish bias – which is complemented by European credit holdings immediately hedged though swaps and despite the Swedish covered bond portfolio – is a result of better liability matching. But there is a more mundane reason: “We have a home bias, because it is easier to find managers that can handle the Swedish market in Sweden”.

The insurer’s 10% real assets portfolio consists of property, infrastructure and farmland, with an emphasis on reliable and steady income streams.

Property holdings, which SPP seeks to acquire directly, focus on office and hotel developments in Sweden’s larger cities. “We like to have long-running leases with stable companies that have a more bond-like return. This means that the investments do not follow the economy, and emulate bond returns.”

However, he says that residential does not feature among its property portfolio, although it is indirectly represented through the covered bond holdings that comprise a third of its fixed-income holdings.

Callert stresses that the investment strategy is suited to Solvency II, of which the final details were only confirmed earlier this year by the European Parliament. Despite this, the Swedish regulator Finansinspektionen has now transitioned to a Solvency II-only discount rate for its insurance and pensions industry, meaning institutions are now no longer required to have their eye on two distinct targets.

While Callert may be comfortable with the current Solvency II-based discount rate, it nevertheless poses problems in the continuing low-yield environment – he notes, for one, the shortfall between government bond returns of 2% and the 4.5% required under the new ultimate forward rate.

He is positive about the opportunities afforded to the insurance sector by Solvency II, despite the sometimes restrictive nature of the capital requirements, which has attracted scrutiny from affected sectors.

“What’s interesting in Solvency II is that there could be opportunities for European insurers to have their own extension of loan markets,” Callert says, noting that such assets would be treated well by the supervisory regime, and better than loans have been treated under preceding frameworks.

“That is something we can do in the near future to increase return– which is to examine the leveraged loan market,” he says.

The effectiveness of holdings under the then provisional revised solvency regime is that the factor that has informed all decisions to revise investments over the last three years, Callert notes, especially as increasing capital in a legacy business is difficult.

Nevertheless, capital requirements are not the sole measure whereby SPP decides where to invest, as environmental, social and governance (ESG) concerns also guide the decision. “Both our traditional portfolio and our unit-linked platform have sustainable investment as an overall philosophy – we have incorporated ESG and don’t invest in the 100 worst companies, measuring the sustainability score of the portfolio,” says Callert (see panel).

Alongside its liability-driven investment strategy, and despite equity only accounting for 10% of overall assets, SPP Livförsäkring avails itself of the resources of its parent company, the Norwegian Storebrand Group, to be an active player in the area of sustainability. Callert notes that the insurer automatically excludes certain stocks, such as tobacco or weapons manufacturers. “We have a team of 10 people who follow 3,000 companies for areas we do not like, scoring them between zero and 100 on sustainability,” he says.

Storebrand, which acquired SPP in 2007, applies a three-pronged approach: best in class positive screening, the aforementioned negative screening whereby certain sectors are excluded as well as those that fall foul of the ESG score, and engagement with investee companies.

It regularly updates its group-wide sustainability guidelines that aim to solve societal problems and seeks to prevent any activities that it deems harmful to societal growth. Its most recent sustainable investment report addressed concerns voiced by other sustainable investment champions, namely those of the development of a carbon asset price bubble.

“If international climate policy is successful, and we manage to limit global warming to two degrees Celsius, it will mean that a large proportion of the world’s fossil reserves cannot be extracted as a source of energy or fuel,” the report notes, stressing that reserves will therefore become “worthless”.

“To ensure stable, long-term returns for our customers, we must understand how global trends, such as the scarcity of resources and population growth will affect profitability in large, listed companies,” it adds.

In highlighting the benefits of ESG, and the opportunities rather than the hurdles faced by Solvency II, Callert paints a picture of a life insurer able to take on future challenges and overcome the hurdles facing investors in a low-interest rate environment.