French second-pillar pensions have experienced numerous reforms recently. Agirc-Arrco, the main complementary pay-as-you-go scheme, covering 18m private sector workers and 12m retirees, has faced regular recalibration of its parameters to match its evolving financial and demographic environment – for instance, in 2003, 2009, 2010 and 2011. But this time is different. The financial and economic crisis has bitten so hard that the reforms have failed to put Agirc-Arrco back on track. Despite additional reforms in 2013 and 2014, tougher measures now have to be taken.

The 2013 reform was designed to relieve Agirc-Arrco’s finances with lower inflation indexing on pensions. The March 2013 agreement slowed pension hikes to 1 percentage point less than inflation, without lowering pensions when inflation is below 1%. Of the €72bn paid out annually in pensions, this type of ‘de-indexing’ might have saved money. But with French inflation up only 0.7% in 2013 and 0.1% in 2014, freezing pensions failed to make the expected savings.

By the end of 2013 another set of reform was required to stop Agirc-Arrco’s reserves from diminishing. This time it was accompanied by social security pensions reform, enacted by the 20 January 2014 pensions law, lengthening the contribution period to 43 years for the attainment of full retirement rights. Harmonising Agirc-Arrco’s retirement age with the first pillar would help restore its balance. But this measure will only be implemented for those born after 1973, postponing its financial impact until the 2030s.

By the end of 2014, as a result of the ongoing economic crisis, Agirc-Arrco’s situation continued to worsen. Last December, a report from the Cour des comptes, the Court of Auditors, Ensuring the Future of Additional Private Sector Pensions, outlined the need for structural reforms that could mean the end of Agirc-Arrco.

The Cour des comptes was stark. “Agirc and Arrco have experienced a deficit for five years,” recounted the first president of the court, Didier Migaud. “This means that every year they have paid out more pensions than they received contributions.” This annual deficit reached €4.4bn in 2013, meaning 6% of paid pensions were not covered by contributions. 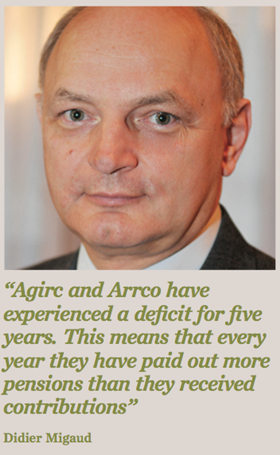 The economic crisis is to blame for the contribution gap. France experienced its first absolute decrease in salary volume in 2009, while demographics and longer life expectancy raise pension costs annually by 3%.

Thanks to its long-term reserves, Agirc-Arrco has managed to continue to pay pensions. After reaching €60bn in 2008, long-term reserves shrunk to €52bn by the end of 2013. Total reserves are €79bn but that includes €27bn of working capital, needed to ensure liquidity between outgoings and contribution income.

This erosion endangers the second-pillar safety net, and the Cours des comptes warns that Agirc-Arrco’s reserves could run dry by 2023. Without a rescue package, Agirc could run out of reserves to pay full pensions by 2017.

Agirc, the French executives’ complementary regime covering 6.7m people – 4m contributors and 2.7m retirees – saw its own long-term reserves drop from €10bn in 2006 to €6.8bn in 2013 and possibly below €5bn now. All liquid assets have been sold by Agirc’s decentralised institutions, and the proceeds handed over to the GIE Agirc-Arrco central body, leaving retirement institutions without reserves other than private equity funds they cannot exit.

“This deterioration is leading to an emergency situation unprecedented in 20 years,” Migaud warned – all the more because of the responsibility of the government for Agirc-Arrco’s deficit given the unique legal status of the set-up. The two regimes are strictly private non-profit institutions established and run by social partners since 1947 in the case of Agirc and 1961 for Arrco. But, they qualify as public entities for the purposes of the Maastricht treaty as the state made Agirc-Arrco contributions compulsory by law.

This means the French government is liable to Brussels for Agirc-Arrco’s deficits, which are included in France’s commitments to the European Stability and Growth Pact (SGP) under constraints framed by the Excessive Deficit Procedure (EDP).

In other words, the message from the Cours de comptes is that social partners bear an urgent responsibility to solve Agirc-Arrco’s deficit. For its part, the government is intervening, putting constraints on social partners’ levers to balance complementary pension schemes.

The law has placed a 28% ceiling on total compulsory retirement contributions, which already amount to 27.55%, including a 17.45% contribution for social security pensions on salaries up to a ceiling of €3,170 a month (10.3% from the employer and 7.15% from the employee). Agirc-Arrco’s contribution rate already reaches 10.1% for executives and 9.75% for non-executives earning up to the €3,170 ceiling, meaning there is not much room left to raise contributions.

Further drastic options must be explored to balance Agirc-Arrco’s finances, which is no easy task for social partners. The employers’ organisation Medef has called for greater cuts in retirement benefits, proposing penalties for retirement before the age of 67, up to a 40% cut for those retiring at 62, the new legal retirement age.

Another proposal would be to cut survivor pensions by 40%. To compensate for shorter careers and lower pensions, widows are eligible to 60% of their deceased partner’s pension. The additional cut would leave them with 36% of the deceased pension. This means that many would rely on a state old-age minimum allowance.

Union representatives will be under pressure to accept some unpopular measures on the employers’ list. The usual trick to make retirement cuts more acceptable is to postpone and spread them over several years, but this might be difficult, given the dwindling reserves.

The Cours des comptes’ recommendations should serve as parameters for this negotiation, with the implied threat of a state takeover if social partners cannot find the agreement that the public finance magistrates are calling for. An agreement is expected this summer, but ensuring the future of supplementary private sector pensions may take more time.