PGGM’s Agnes Joseph, expert in balanced risk management, and Niels Kortleve, innovation manager, explain how the European Central Bank’s policies are affecting Dutch pension funds, and the options for fixing the problems it has created.

The European Central Bank’s (ECB) unconventional monetary policy is weighing heavily on Dutch pension funds. If the central bank’s low interest rate policy continues, many Dutch pension funds will need to cut benefits over the next three years, and pension contributions will rise. The total damage could be more than €60bn in the Netherlands.

“Over the next three years, the Dutch pension system may implode if the interest rate stays this low.”

There are ways to prevent this: unwind the quantitative easing (QE) policy such that interest rates may rise again; change the regulatory discount rates used by Dutch pension funds; or structurally reform the Dutch pension system.

The Netherlands has €1.3trn in pension assets – 168% of the country’s economic output. Around 94% of these assets belong to defined benefit (DB) schemes. The pension benefits are ‘guaranteed’, in the sense that benefit cuts are only allowed as a measure of last resort.

In the past few decades, interest rates declined due to falling inflation (and falling inflation expectations) and potential growth, and due to changes in the age structure of the population. Declining interest rates have lowered the funding ratios of pension funds. Due to these lower funding ratios, retirement benefits have not been adjusted for inflation for many years now and in some cases benefits have even been decreased. At the same time, pension contributions have increased.

In 2015, the ECB announced an expanded asset purchase programme, known as QE. It was aimed at fulfilling the ECB’s price stability mandate. QE lowered interest rates further. The exact impact of QE on interest rates is hard to determine, but the ECB estimated that the impact on the 10-year interest rate was a decrease of around 47 basis points (bps).

“The longer QE stays, and the longer interest rates stay low, the more harmful it will be to pension savers.”

The impact of this decline on Dutch pension savers and sponsors is enormous. The value of the liabilities has risen by roughly €100bn. Assets have also risen – due to higher bond prices and interest rate hedges – but by around €40bn. So pension savers and sponsors need to make up for approximately €60bn if interest rates stay low due to QE. Contributions could rise by 20%.

Thanks to smoothing mechanisms within Dutch pension regulations, the effect of the 47bps decline in interest rates on pension savers has not been immediate. The smoothing mechanisms are there to avoid day-to-day random fluctuations due to short-term market volatility. Pension funds are by their nature long-term investors due to the long duration of their liabilities, and should not be faced with the effects of short term incidents like QE.

But QE is no longer a short term matter. The longer it stays, and the longer interest rates stay low, the more harmful it will be to pension savers.

Over the next three years, the Dutch pension system may implode if the interest rate stays this low. This is due to a (short-term) recovery period of five years, ending in 2020, which could mean benefit cuts if schemes do not meet minimum capital requirements by then. Contributions are also set for a maximum of 5 years, ending in 2020 for many pension funds. This implies a rise in contributions or lowering of benefits in the next few years.

On 13 February 2017, the Dutch parliament discussed the ECB’s policy and its effect on pension funds. Politicians said that European policy makers should be aware of the impact of their policy on pension savers in Europe – persistently low interest rates slowly poison the European pension system.

The Dutch Parliament and government can see the major impact of QE on pension funds, but they also respect the independence of the ECB. 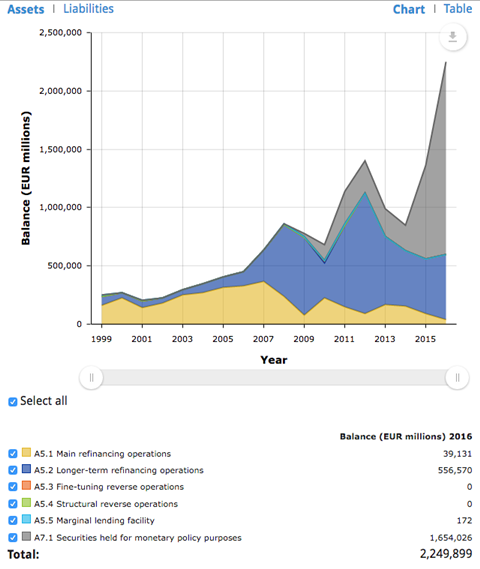 Several solutions to this problem have been posed over the last few months in the Netherlands:

A first way out would be unwinding the ECB’s QE policy, after which interest rates would potentially rise again. It is up to the ECB to decide on the unwinding, but at the same time, it should recognise the negative impact on pensions and other savings, and should consider this when preparing an exit strategy.

A second option is to smooth the impact of the distortion by adjusting the discount rate used in pension regulation. Dutch society regularly questions this discount rate. An alternative could be to adjust other steering mechanisms, for example lengthen the recovery period for pension funds.

On 9 March, the political party 50Plus issued draft legislation to adjust the discount rate for pension liabilities for as long as the ECB policy is distorting interest rates, with a maximum of 5 years. By discounting the liabilities at 2% instead of the current market rate, the funding ratio of pension funds would rise substantially, lowering the negative impact of QE.

A third way is to structurally reform the Dutch pension system. The ‘guaranteed’ benefits could be replaced by variable pension benefits, and the discount rate could be adjusted accordingly. The pension reform is being discussed by Dutch employers and unions at the moment.

In the Netherlands, the pension sector recognises the challenges of the current low interest rate environment. It is not just QE, but QE does put extra pressure on the system and the need to act quickly.