A lack of honest feedback from consultants to trustees on governance could be harming pension scheme member outcomes, according to Chris Hogg, chief executive of the Royal Mail Pensions Trustees.

Speaking at a conference of the UK pensions trade body in Edinburgh last week, Hogg said that effective governance can generate incremental returns – much-needed in the prevailing low return environment – but in a survey carried out by the Royal Mail scheme, well over 50% of consultant and professional trustees ranked a scheme’s governance capabilities as “acceptably equipped” or below.

“So there’s clearly some work to be done,” said Hogg.

The survey also showed that although professional trustees and consultants tend to think that giving honest feedback is important to highly important, this feedback is uncommon.

Research conducted on trustees and consultants found that 95% agreed that “honest dialogue” was essential for identifying and rectifying areas of weakness in scheme governance. However, nearly one in five respondents had seen no instances of consultants delivering developmental feedback, while nearly six in 10 (58%) had observed this on between just 1% and 20% of schemes they worked on. 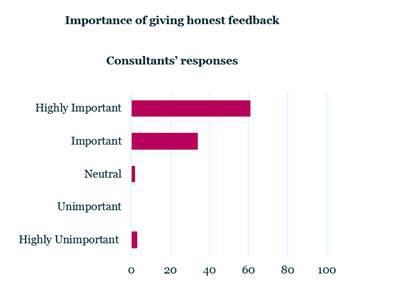 Hogg said the survey results “quite powerful” – if not necessarily surprising.

The lack of feedback represented “wasted value” and suggested that “there’s a lever that perhaps isn’t being pulled in a way that could be,” he said. 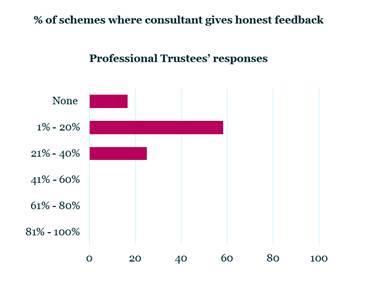 He concluded that “member benefits are at stake so we need to try to find a way” to address the issue.

Paul Richards, director of strategy at consultancy firm Redington, shared the stage with Hogg and said “cold hard economics” was one of the factors behind consultants’ reluctance to provide frank feedback to clients.

In a survey of consultants, 67% said the risk to the client relationship could stop them giving “critical/developmental” feedback, while 69% worried giving this type of feedback would negatively impact their ability to work effectively with the client.

However, according to Redington, 86% of those surveyed said establishing that critical feedback would not affect the relationship between trustees and consultants would increase chances of doing this effectively.

Richards said frameworks were needed to “build feedback into the system” and help overcome some of the concerns that were holding back consultants from giving more critical feedback.

During the panel he presented an approach called “radical candour” that consultants could adopt. He said it was important that consultants introduce their chosen framework “intelligently” and that they seek permission to do so.

The trustees, meanwhile, should find someone they consider a “critical friend” or a trusted adviser and also find and introduce a framework for feedback with which they feel comfortable.