Auto-enrolment looks to be key to Poland’s pension future. Dismantling of the OFE system remains on hold

Poland’s plans for a dramatic overhaul of pensions are moving ahead – but only in part. The Capital Accumulation Programme, unveiled in July 2016 by then finance and economic development minister Mateusz Morawiecki, announced two radical changes: the liquidation of the second-pillar open pension plans (OFEs) at the start of 2018, and the launch of a new voluntary occupational scheme, the Employee Capital Plan (PPK). Morawiecki became Poland’s prime minister in December.

The dismantling of the OFEs, with 75% of the assets moving to new individual pension accounts, and the remainder to the state-run Demographic Reserve Fund (a state buffer vehicle for pension shortfalls), remains on the drawing board, with Morawiecki stating that it may take one to two years to come to fruition.

Considerable sums are at stake – at the end of October 2017, according to the Polish Financial Supervision Authority (KNF), the OFEs had PLN181.3bn (€42.5bn) in net assets. “The reason the government postponed the OFE transformation does not seem to be clear,” notes Małgorzata Rusewicz, president of the Chamber of Pension Funds. “The press was reporting that the final version of the project was not agreed between the ministry of development and the ministry of family, labour and social policy. That fact has never been confirmed by any of the authorities’ representatives and the plan of transformation was specified in the Capital Building Plan and the Strategy for Responsible Development documents approved by cabinet.”

The PPK scheme, however, is closer to fruition. In November 2017 the government announced that it was starting work on draft legislation with publication of the proposed law due shortly.

Under the PPK system, employees will pay 2% of gross wages on top of their existing social security contributions and employers will pay 1.5%, with the option to raise each to 4%.

The system will be obligatory for employers but voluntary for employees. To boost take-up, the government will add a further annual PLN240 to each individual plan as well as a one-off bonus of PLN250.

Employer contributions will be exempt from social insurance tax and the government will reportedly fine any employer attempting to discourage workers from signing up.

The proposed auto-enrolment system is also designed to maximise take-up. It will cover all workers aged between 19 and 55 years, putting the onus on employees themselves to opt out if they want. Older workers will be able to opt in and temporary suspension will also be possible.

The project – whose design has incorporated best practice from Germany, the UK, Canada, Scandinavia and New Zealand – has been broadly welcomed by the Polish pensions industry. Rusewicz says: “For many years we have been recommending setting up a new, effective system of additional pension savings system, including auto-enrolment. We see PPKs as a very important solution that meets many economic needs and challenges, but as long as we do not know the project of regulation we are unable to assess the system in detail.”

The aim is to cover some 11.4m Polish workers – a 75% participation rate according to government estimates. Rusewicz sees this as probable, as long as certain conditions are met: “These include clear private legal status of savings, an effective educational campaign and governmental activities that aim to restore social confidence in the pension system. In our opinion, the announced OFE transformation is one of the key issues from this perspective,” she says.

Poland does already have voluntary company pension schemes, the so-called employee pension programmes (PPEs), which were created in 1999, but which for various reasons, including difficulties in transferring schemes for members changing jobs, have not proved that popular.

According to the latest KNF data, as of the end of 2016 there were just over 1,100 companies running PPEs, covering about 395,000 employees, while assets, managed mainly by investment fund and insurance companies, totalled PLN11.4bn.

Under the new plan, employers with PPEs that levy a minimum total contribution rate of 3.5% will be able to continue with these programmes instead of offering a PPK.

According to the most recent information from the finance ministry, the programme will be implemented in six-month stages, starting January 2019 for companies with 250 or more employees, followed by those with above 50 but fewer than 250 employees, those with 20-49 employees, and the remainder.

Morawiecki, who has described long-term savings as the Achilles’ heel of the country’s socio-economic policy, says the PPKs could increase Polish companies’ access to cheaper capital, boosting the domestic share of development investment financing, and spurring Polish competitiveness and innovation.

Financial management of PPKs has been restricted to Polish investment fund companies (TFIs) with a minimum three years of operation in the Polish market.

The government estimates that more than half of the 60-odd TFIs currently licensed by the KNF will be interested in participating in the programme.

The state-owned Polish Development Fund, which is co-ordinating the project, and which runs a TFI itself, is to set up a portal of TFI fund returns and other information to help employers select an appropriate vehicle.

Notwithstanding the regulatory uncertainties over their future, the second-pillar pension plans (OFEs) delivered exceptional returns in 2017. The 12-month weighted annual return as of September 2017 averaged 27.8% as the equity-based funds capitalised on the Warsaw Stock Exchange’s bull run.

“The strong GDP growth in 2017, above 4%, stemming mainly from the increase of consumption, has been accompanied by a considerable rise of consumption-driven sectors, both consumer staples and consumer discretionary,” explains Wojciech Rostworowski, CEO and president of the board of PKO BP Bankowy PTE. “The increasingly tense labour market has driven up the probability of core inflation growth in 2018 and resulted in market expectations of surging rates in 2018 and first half of 2019 – hence the impressive growth of the banking sector.” 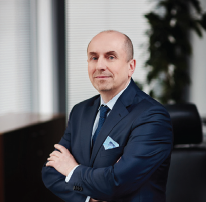 The pension funds held about 85% of their assets in equities throughout 2017, of which 6-7% were foreign and the rest Polish. “The majority of foreign assets held by the Polish pension funds were US and European equities. Both the main S&P 500 US index and its European counterpart EURO STOXX 50 had a 15-20% lower rate of return in Polish zloty terms than the Warsaw Stock Exchange’s WIG index.  Therefore, the best performers were pension funds with high exposure to Polish shares, especially those with large market cap,” he adds.

As of the end of October 2017 the value of OFE net assets grew by 23.3% year-on-year in Polish zloty terms, despite a 1.8% fall in membership, to 16.1m. The growth more than offset the outflows under the ‘slider’, where members with 10 or fewer years left to retirement have their assets moved incrementally to the first pillar. Rostworowski estimates the total slider outflows in 2017 at 1.5% of net assets, rising to 2.8% in 2018.

The increase in outflows has been accelerated by the government’s decision, implemented in October 2017, to reverse its predecessor’s policy of raising the retirement age to 67 years. In asset allocation terms, the reversal has driven down the level of deposits in OFE portfolios to about 5.5% in October, from 7% in previous months.