Private equity funds are paying out distributions from maturing investments faster than they are spending investors’ capital, according to a new study.

According to eFront, an alternative investment management software and solutions provider, private equity fund distributions have “significantly and durably” outstripped capital calls in an “exceptional” phase beginning in 2013.

Thibaut de Laval, chief strategy officer at eFront, said managers were “harvesting the good deals of the past” but still struggling to put existing capital to work.

Net distributions reached a record level in 2017, eFront’s report said, which could be a sign that asset allocators would make significant fund commitments this year through reinvestment. This assumed that managers would raise large funds able to accommodate such cash inflow, the provider added.

“Capital inflows in private equity are driven by the dynamics of asset allocation, but also by capital distributions that are reinvested in the sector,” said Tarek Chouman, CEO of eFront. “Net capital distributions could in effect be an early indicator of the future dynamics of fund raising, assuming that fund investors do not divert them to direct investments, secondaries or other asset classes.”

“This could translate into a further extension of investment periods of active funds, or fund size reductions,” it noted.

Data from Preqin, the private assets data specialist, showed that private equity funds had almost $1.1trn (€843bn) in “dry powder” available to invest at the end of June. This included the combined value of capital committed to private equity and venture capital funds but not yet invested by managers.

The high net level of distributions also indicated that the size of private equity portfolios could be shrinking, according to De Laval, if uncalled capital is excluded.

“More funds are being raised, but the actual residual value is probably going down to a certain degree,” he told IPE. “It is not as fast growing as it may look at first, because private equity managers are struggling at the moment to source as much as they can.

“They are harvesting the good deals of the past, but now they are struggling to get to the next level in terms of how many deals they can make.”

While this meant managers were not rushing to spend money, he said, investors allocating to private equity funds could be more worried about managers struggling to source good deals.

As an investor, he said, “as much as I don’t want [managers] to make bad deals I also want them to make good deals”.

Investors could choose to become “even more picky” when selecting managers, De Laval added, ensuring that they can source sufficiently high-quality deals regularly, as well as raise enough capital.

“That probably shows that the main bottleneck for private equity to continue to thrive is not so much on the fundraising task but on the sourcing step of the private equity lifecycle,” he said. 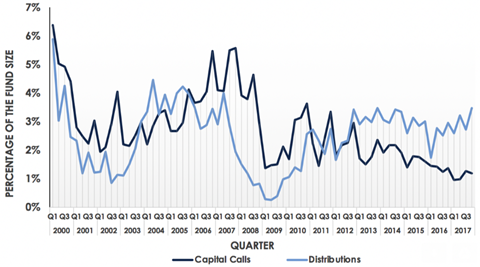