Are regulated apportionment arrangements the answer for insolvent employers?

• The Pensions Regulator and The Pensions Protection Fund are making creative use of regulated apportionment arrangements (RAAs) in insolvency events.
• RAAs may become more common as mature scheme sponsors fail, as the authorities will not sanction a charter for dumping schemes.
• RAAs are complex and expensive but can deliver results in the long term.

The regulations and oversight of the UK Pensions Regulator (TPR) can only protect a pension scheme’s members so much. Sometimes there is nothing that can be done for a plan sponsor in terminal decline.

Yet if a company believes it could succeed were it not saddled with its pensions burden, it can petition the TPR for a regulated apportionment arrangement (RAA).

An RAA splits a business from its pension fund and allows it to continue trading. The concession is that in exchange for the pension scheme debt, the Pension Protection Fund (PPF ) receives equity in the phoenix company. In time, it is hoped – rather than expected – that this asset will deliver returns in excess of those available at insolvency. 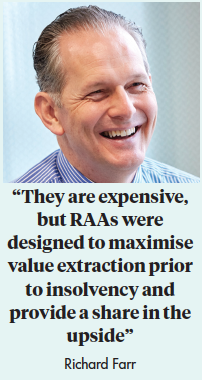 RAAs are rare and employers are required to clear several hurdles from TPR just to be considered.

The first condition is that insolvency must be inevitable within a year. As part of that, it must consider whether the scheme might receive more from insolvency than it would if it were to limp on.

If there is a parent company or group, TPR can regulate to ensure the scheme is prioritised over other creditors when distributing any value left in the business.

Whilst the TPR is the gatekeeper, the PPF is involved in talks about RAAs from an early stage, says Malcolm Weir, head of restructuring and insolvency at the Pension Protection Fund.

He says the PPF is “pretty mercenary” about the employer if it is seeking to restructure, as neither the PPF – or TPR – is going to allow a business a quick and easy process to walk away from its pension scheme. The equity stakes the PPF takes are considerable, and allow it to benefit if the company does prosper in the future.

“If the new shareholders are not currently involved with the business, the PPF takes a 10% stake,” says Weir. “If the future shareholders are people who are currently involved, we take 33%. This is so that those who were involved with the failed company aren’t taking the value. Most lenders, such as private equity houses, if saving the business, would take a bigger stake of the equity.”

Three RAAs have been agreed so far in 2017 with BHS, Hoover and Tata, although only Hoover’s has been finalised.

The first RAA was in 2005, when the PPF took on the pension scheme of the insurance consultancy Heath Lambert. When the company was sold in 2011, the PPF realised over £32m (€35m).

Since 2009 there have been 27 deals, and those disclosed appear to be becoming increasingly sophisticated.

The straightforward ones agree to receive payments in excess of the insolvency dividend into the scheme that will ultimately join the PPF. The Jessops and BMI are examples of this deal structure.

However, not every scheme ends up with the PPF. Both the PPF and TPR are prepared to consider alternatives and offer better value to members.

In 2012, the food manufacturing group Uniq – formerly known as Unigate – agreed to give up 90% of the equity to its pension scheme if its members forgave claims on it. The scheme obtained over £100m when the shares were sold, enabling trustees to a buy-in that was equivalent to compensation benefits yet avoiding the PPF. 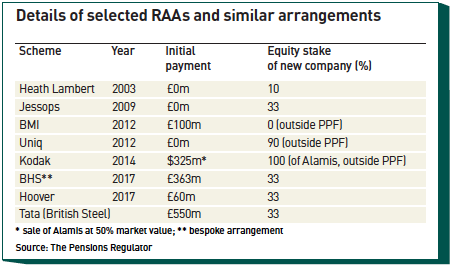 In 2014, the pension scheme of photographic company Kodak received Alaris – a business within the group – worth more than any compensation through insolvency. The twist was that the PPF agreed as long as members were offered the option of joining the PPF or a new scheme with benefits that were below the old ones, but above PPF levels. Most elected to join the new scheme.

The 2016 deal with engineering firm Halcrow saw the PPF receive a £80m payment from Halcrow’s US parent and a minimum of 25% and maximum 45% of the surviving UK employer. Like Kodak, it gave members the option to enter the PPF or a new scheme that would have restrictions on its recovery plan and investment strategy.

Of the three deals struck in 2017, BHS’s and Tata’s resemble Halcrow’s deal in that a new scheme will be offered to members. The Hoover scheme is expected to join the PPF, although the PPF will hold 33% of the new company’s equity. 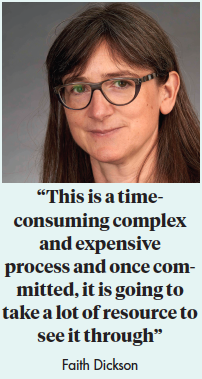 Making use of RAAs creates more work, but it is within the normal parameters for the PPF. After all, it manages complex investment strategies. However, it should be remembered that these holdings are there to prevent any regret from allowing a business to restructure, and having a piece of the action to cover old debts.

“We don’t actively manage our shareholdings and we do not attribute any value to them as the company was previously assessed to be insolvent,” says Weir. Therefore, until a turnaround, they are held at a nominal value on the PPF’s balance sheet.

Most equity deals the PPF holds are unlisted, says Weir, and the PPF does not seek to be activist or exert influence over the direction of the business it holds these shares in.

While TPR, the PPF and industry see the RAA as a useful mechanism to give second chances and deliver funding for the scheme, it is not an easy process, says Faith Dickson, a partner at Sackers.

This is not helped by the timeframes involved, as an employer will be insolvent within 12 months to meet TPR’s first hurdle. This period is not long enough, says Dickson, as by this point, “it is a self-fulfilling prophecy”. And as Weir suggests, it is not an easy option to take.

Dickson adds: “This is a time-consuming complex and expensive process and once committed, it is going to take a lot of resource to see it through.”

Money spent could leave less for the scheme, so it needs a viable business proposition. Things do not always go to plan, of course. The PPF took a 33% stake in the restructured photographic retailer Jessops in 2009, only for the company to go bust in 2013.

But the opportunity this presents for turnaround – and the moral hazard from a scheme falling into the PPF – may make RAAs more commonplace, though under limited circumstances.

Anne-Marie Winton, a partner at ARC Pensions Law, says RAAs are “not quite the pensions unicorn” and that it can take many years for some deals to be agreed. She believes the PPF would rather deal with a distressed scheme than an insolvent one, and this may lead to closed doors deals.

New legislation to tackle restrictions such as the 12-month rule, or the 28-day ‘cooling off’ period which could see a business go bust without anyone being able to work on a rescue plan, would also smooth the process.

Yet, these might be unnecessary if TPR was comfortable with its winding-up powers, suggests Winton. “TPR could then trigger a section 75 debt leading to the inevitable insolvency of the employer and then be handed off to PPF for a RAA,” she says.

However, Winton points to doubts over TPR’s current powers, although this could be resolved through legislation.

TPR’s acceptance of RAAs will lead to more being agreed, says Richard Farr managing director of the covenant advisory firm, Lincoln Pensions. “Insolvency destroys value and if there is some value in the employer, then it is worth doing,” says Farr. “They are expensive, but RAAs were designed to maximise value extraction prior to insolvency and provide a share in the upside.”

Recently, some RAAs have been of material value to the PPF, says Farr, and he suggests that “for the right value trade off, they are well worth doing”. The precondition is that there is value to protect in the first instance.