Romania’s second-pillar and third-pillar funds have had to overcome a political stalemate and the COVID crisis in 2020.

“Although the pandemic came with a shock for the economy and financial markets, the impact on the Romanian pension funds, which have mostly local exposure, was reduced. They even registered a positive yield at the end of September,” says Johan Meyer, CEO at Franklin Templeton Bucharest Branch.

“This evolution is based on the good performance of the Bucharest Stock Exchange between June and September, when asset values came close to the values registered before the pandemic.”

Franklin Templeton was appointed in 2009 to manage the RON8.6bn (€1.8bn) Fondul Proprietatea, a Bucharest-listed investment vehicle managing privatised state assets that was set up as a property restitution fund.

Meyer comments: “The market recovered significantly over the summer and fall. As such, the BET-XT increased in value by 15.4% on 30 September 2020 compared with 31 March 2020, influenced by several factors – relaxations of social distancing rules, fiscal programmes launched by the government, and local capital market admission in the FTSE index. In this context, pillar-two pension funds registered a real positive return.” 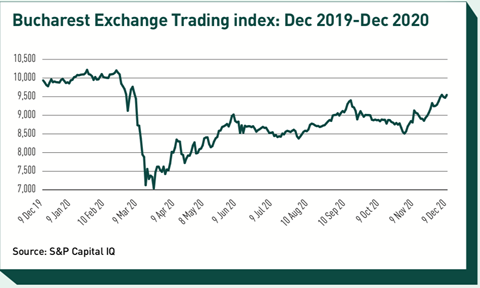 In the first quarter of 2020 year-to-date, second-pillar returns slumped by 6.7%. However, as of November 2020, they averaged 4.4% year-on-year, according to data from the Romanian Pension Fund Association (APAPR), compared with 11.8% for the full previous year.

“The estimated inflation for the same period is between 2.5% and 3%, so the funds have remarkably managed to over-perform above the inflation theoretical benchmark even in the most difficult year to date,” observes Mihai Bobocea, adviser to the board and spokesman for APAPR.

Romania’s legislative elections on 6 December heralded another period of coalition, as no single party won close to 50%.

With counting almost complete as of early December, the Social Democratic Party (PSD) obtained 29.4% of the Chamber of Deputies (lower house) votes, followed by the governing centre-right National Liberal Party (PNL) at 25.2%, Save Romania Union Alliance (USR PLUS) at 15%, the far-right Alliance for the Unity of Romanians (AUR) at 8.9%, and the ethnically based Hungarian Democratic Union of Romania (UDMR) at 5.9%. The remaining parties failed to reach the 5% threshold.

Although PSD obtained the highest share, it was well below its 2016 vote share and now lacks sufficient coalition allies, unlike the PNL which is ready to partner with USR PLUS and UDMR to form a centre-right government. No one appears ready to partner with AUR, a relatively new, ultra-nationalist and conservative party whose vote share was the surprise of the 2020 election.

The composition of the coalition is important for the continuing growth of the second-pillar system. PSD, which governed from 2016 until 2019, has proved particularly hostile.

In 2018 it cut the contribution rate from 5.1% to 3.75% of gross wages, slashed provider fees while raising their capital requirements, and made the system voluntary. That year the second-pillar funds recorded their worst yearly – and only sub-inflationary – return of 1%.

The PNL, which took power in October 2019 as a minority administration with support from smaller parties after the PSD was evicted from government following a no-confidence motion, has been much more supportive of the system, overturning the capital increases and returning the second pillar to a compulsory system.

However, governing as a minority has not proved straightforward. In August the government reduced the PSD’s earlier 40% state pension rise, set for the following month, to 14%.

In September, in the 2020 budget revision, the PSD succeeded in overturning this, supported by, among others, the UDMR party.

The government responded by submitting the pensions rise and another PSD draft budget amendment, on teachers’ salary increases, to the Constitutional Court on the grounds that they did not, contrary to Romania law, identify how the increases would be funded.

Unsurprisingly, public supporters of the higher increases have regularly cited further cuts, and even the abolition of second-pillar contributions as the obvious funding source.

This issue is still outstanding as the court postponed its review until January 2021, although the delay has provided the country with a breathing space. Even without the PSD’s extra spending proposals, the budget deficit soared in 2020 because of the effects of the pandemic.

In its October review, Fitch Ratings forecast the year-end general government budget deficit at 9.5% of GDP, up from 4.2% as of the first half of the year. According to Fitch, while a 14% pensions increase would increase expenditure permanently as of 2021 by 1-1.2 percentage points of GDP, a 40% rise would push this increase up to 4 percentage points. The agency affirmed the country’s sovereign rating at BBB- with a negative outlook.

Meanwhile, even the PNL, having vowed in 2019 to boost the contribution rate from 3.75% to 5% by 2021, has had to scale back its commitments to the second pillar.

Its election manifesto could only promise a 1 percentage point rise by 2024.

“This goes to prove that the conservative stance in terms of portfolios and the active management performed by the pension companies has once again delivered positive results, even in the year of corona, with a painful global lockdown, economic recession and significant capital markets turmoil.” Cumulative returns since 2008 totalled 160.8% against an inflation rate of 43.0%

The most radical suggestion to boost the second pillar is from the centrist USR PLUS party. Its proposal, a condition of its participation in the coalition, is to channel natural gas and oil revenues from Romania’s offshore Black Sea blocks into the second pillar, with special accounts for non-members of the system.

The second-pillar funds, in turn, would channel 50% of those investments into shares and bonds issued by companies investing in viable energy projects, such as co-generation plants, energy infrastructure, expansion of gas pipelines, intelligent electricity-transmission networks, renewable energy and petrochemistry.

“The proposal is generous and obviously worth investigating, but it seems it will require some legal complexity to be accommodated within the framework of the current pension funds, which are based on individual participation and are work-related,” observes Mihai Bobocea, spokesman for APAPR.

Compared with October 2019, the government bond share increased by 7.4 percentage points, at the expense of corporate bonds, equities and deposits.

“This seems a temporary phenomenon and is also caused by movements in the equity markets,” adds Bobocea.

Both pillars are primarily invested in domestic assets, with foreign holdings accounting for 8-10%, all in EU and Swiss securities.

“For the immediate future, the situation remains uncertain, depending on the evolution of the health crisis, the arrival of the vaccine and its distribution worldwide, the improvements in the treatment and the possibility of another lockdown,” says Meyer.

He adds: “In any case, the effect on the performance of the pension funds should be limited thanks to their conservatively managed and diversified investment portfolios.”