Volatile financial markets and legislative uncertainty continue to cause headaches

The year 2019 was volatile, with sharp falls in bonds yields partially offset by strong equity performance.

This is our eleventh annual analysis of pension scheme finances. Our report covers 15 of the largest companies (by market capitalisation) listed on the Irish Stock Exchange and other exchanges that have DB pension arrangements in Ireland. We also studied 11 semi-state/state-controlled companies with DB schemes that have published pension accounting information for their 2018 financial year.

Reported funding levels
The accounting standards look at the scheme assets and funded liabilities at the accounting date.

The average funding level for the schemes increased from 91% to 93% in 2018. The modest improvement was the result of an increase in bond yields and lower inflation expectations. Company contributions paid were another factor. Figure 1 shows how funding levels have changed in 2018 for the companies analysed.

We also considered movement in pension scheme balance sheet positions during 2019. Financial markets were volatile in 2019. Global equities, as measured by the FTSE World index, were up 18.9% to the end of September 2019. On the liability side at the end September 2019, high-quality corporate bond yields were lower on average than at the end of 2018. In particular, yields fell significantly in the third quarter. These lower yields mean that IAS19 liability values have risen during 2019, as pension scheme liabilities are calculated by these yields for accounting purposes.

As figure 2 shows, there can be volatility in the level of deficits as equity values and bond yields fluctuate. The estimated deficit was as high as €5.0bn in August 2019.

Contributions remain a cost
The companies analysed made contributions of €1.1bn to their pension schemes in 2018. This is broadly unchanged from both 2016 and 2017. It is clear that pensions remain a significant cost. 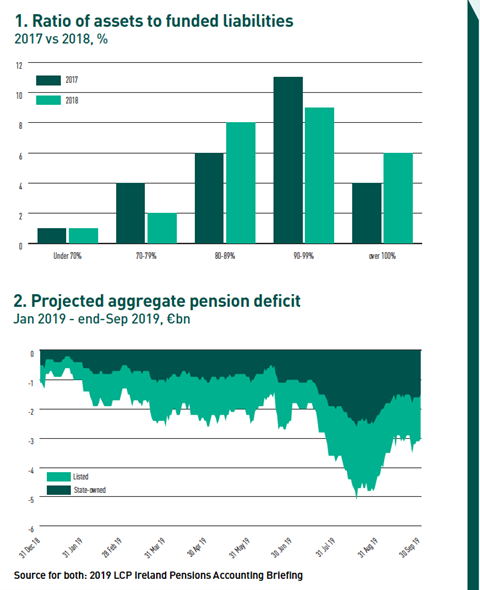 The discount rate
The discount rate is the key assumption used to value pension liabilities. Under IAS19 and FRS102, this assumption is based on the yields available on long-dated high quality (typically AA-rated) corporate bonds in the currency of the liability at the valuation date. These yields, and hence the discount rates, will fluctuate daily with market conditions.

While, in theory, pension schemes with similar durations should be valued using similar discount rates at a particular point in time, in practice, the lack of a deep market in long-duration corporate bonds can result in different modelling techniques and divergences in discount rates. A small change in the discount rate can have a significant impact on the balance sheet position.

The discount rates used as at 31 December 2018 have been charted against the disclosed durations and show divergences in approach (see figure 5).

Other risk metrics
The riskiness, or otherwise, of a DB pension scheme can be determined by key metrics – funding position, size of scheme relative to the company, investment strategy, and so on. IORP II will impact on the governance obligations of pension schemes with an increased requirement on quantitative analysis of risk. 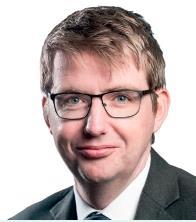 “The companies analysed made contributions of €1.1bn to their pension schemes in 2018. This is broadly unchanged from both 2016 and 2017. It is clear that pensions remain a significant cost” - Tomás Kirrane

Another measure is to consider the sensitivity of the pension scheme funding level to a market shock – such as a sharp fall in bond yields. For the schemes analysed, we have estimated that a decrease of one percentage point in bond yields would cut the average funding level by 9% (as at 31 December 2018).

A fair distribution?
We have compared dividends paid to against pension contributions paid and scheme deficits. The listed companies analysed paid dividends in 2018 of over five times the level of contributions. 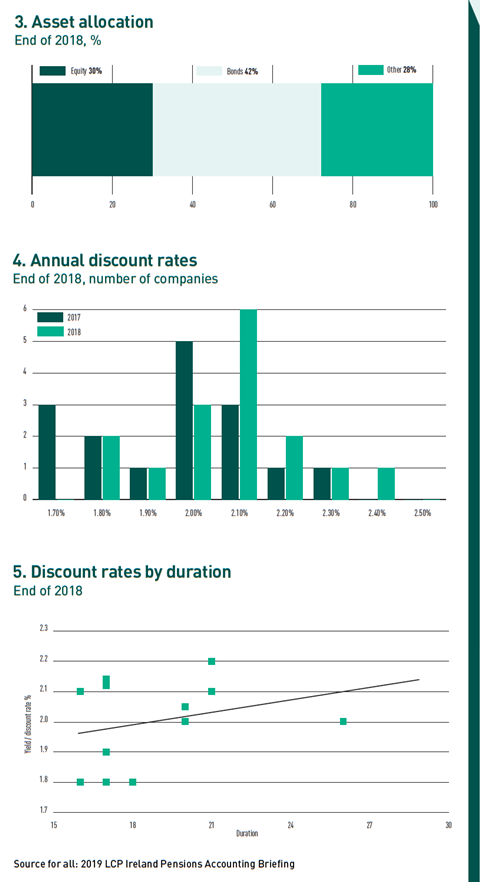 The total IAS19 pension deficit for the 11 that disclosed a deficit in 2018 was €1.7bn. Those same companies paid dividends totalling €1.4bn – only 18% less than the total deficits. Interestingly, for the same 11, if the 2018 dividend payments had been pension contributions instead, they would have fully eliminated the 2018 deficit for seven schemes.

Tomás Kirrane is an actuary at LCP Ireland. The 2019 LCP Ireland Pensions Accounting Briefing is available to download at www.lcpireland.com