Reform of the Dutch pension system has been under debate for more than a century but now seems to enter a new dimension. At the beginning of July 2020, a ‘historic’ deal was reached between the social partners – employers and trade unions – and the government about the direction of the new Dutch pension system. This involves a collective yet individual DC system which is no longer legally characterised as defined benefit (DB, in Dutch: uitkeringsovereenkomst), but truly defined contribution (DC, in Dutch: premieovereenkomst’).

Although the system will only enter into force in a few years (2026-27), the legislation must be prepared now. It will be a long and winding road and many obstacles still need to be overcome.

In this article, I want to discuss three key elements in the reform in light of EU law:

• mandatory participation to a Dutch pension fund; and

First, one of the major concerns when entering a new pension system is the so-called ‘conversion’: the collective conversion – established on the basis of changes to the applicable legal/regulatory pension framework, implemented on the basis of an act of government – of accrued pension rights and entitlements arranged by the relevant pension fund into rights with a different, and in particular a (more) conditional character without the explicit consent of the individual scheme member.

On this basis, pension rights lose their unconditional (ie, in principle ‘guaranteed’ DB) character. This is ‘in principle’, because Dutch DB was never truly DB.

Because the Dutch legislator is changing the legal nature of the contract, questions can be raised on its compatibility with European law, as pension rights fall under the ambit of European property rights.

Some Dutch pension lawyers – who advise the Dutch minister – are of the opinion that reduction of pension rights is possible in the public interest, provided the individual is not disproportionately burdened by the reduction. They point to the property article (1 First Protocol (FP) in the European Convention on Human Rights (the ECHR).

Indeed, a fuzzy norm as ‘public interest’ is open to many interpretations and is not likely to be the problem in the conversion discussion as the European Court of Human Rights in Strasburg quickly accepts an appeal to the public interest. But is the individual ‘proportionally’ burdened by this reform?

The plans of the government are really neither comforting nor convincing. For example, the minister wants to ‘freeze’ the individual right of a pension saver to object to the conversion, which it currently has under Dutch law. But there are two important treaties under European law that might object to such a freeze. The ECHR and the EU Charter of Fundamental Rights. These are different frameworks.

In a peer-reviewed study a few years back I demonstrated that there are major differences between the ECHR and the Charter. To name one: although conversion will not strictu sensu be a legal obligation imposed by the Dutch legislator, the board of a pension fund may decide to convert DB into DC. Article 17 EU Charter, which governs the right of property, has direct horizontal effect, which means it may also be invoked directly against the pension fund if it infringes the right of property – for example, by conversion leading to possible liability claims by the pension savers. 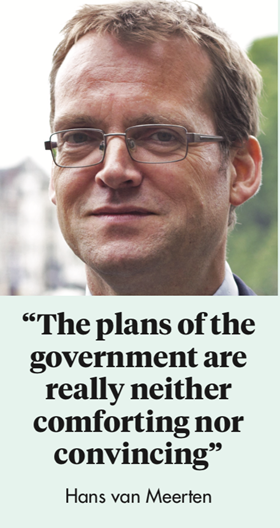 That brings me to the second point: mandatory participation. About 80% of Dutch pension savers participate in a mandatory pension fund. This pension fund has to be a Dutch legal entity by law, which prevents foreign (non-Dutch) providers to be active in this market.

Currently, the mandatory nature of the participation has been accepted in the famous Albany case-law , in which the European Court of Justice (ECJ) ruled that mandatory participation could be justified by adopting certain elements in light of competition law, for example the high level of solidarity. By switching to DC, the government believes that this mandatory participation is not jeopardised by the ECJ. I see this differently, however.

Beside the point on mandatory participation, equally important is the fact that Dutch law currently allows only Dutch funds to carry out mandatory pension schemes, to the exclusion a priori of non-Dutch providers, which appears even more difficult to justify.

Having in place a system that discriminates against foreign pension providers of the EU/EEA, is in principle forbidden by EU law. This prohibition is allowed only under strict conditions: public policy, public security and public health. These conditions are clearly set out in EU case law, and none of these grounds seem to offer compelling reasons to justify the a priori exclusion of non-Dutch providers.

The new Dutch DC contract is still very complex and hard to understand, especially by the pension saver. From EU court cases it can be deduced that information by a financial undertaking (pension funds are undertakings according to EU law) must be “clear and precise” and “necessary for a good understanding”. In addition, the contract must be sufficiently transparent. This will pose a huge communication challenge.

Hans van Meerten is professor of law, economics and governance at Utrecht University School of Law