In February 1992, the then governor of Arkansas, Bill Clinton, dubbed himself the ‘Comeback Kid’ after finishing second in the crucial New Hampshire primary. At the time, that may have sounded like wishful thinking. It proved prophetic. The winner that night, Paul Tsongas, is barely a footnote in history.

There are some things we would all be happy to be rid of forever. In economics, a long-held consensus has been that in the developed world inflation is about as relevant as former Massachusetts Senator Tsongas. But many can see the inflation Comeback Kid re-entering the picture and edging onto centre stage.

In May, June and July, US inflation, up 5% and 5.4%, shocked economists. Elsewhere, increases are stuck above central bank targets in the euro-zone, UK and Australia as well as large emerging markets including Brazil. In the euro-zone PPI rose 10.2% year-on-year versus the consensus forecast of 9.4%.

Everyone from the Federal Reserve and European Central Bank (ECB) to the 72% of those surveyed in the July monthly Bank of America Global Fund Manager Survey, dismiss inflation as ‘transitory’. They point to base effects and supply-chain bottlenecks in the global economy as it shrugs off its pandemic hibernation.

The naysayers appear to be winning the argument, if markets are a guide. In Q1 2021, yields on 10-year US Treasuries rose from 0.9% to 1.75% and 30-year Treasuries had their worst quarter on record, registering a -24% annualised return.

But even as CPI rose, 10-year yields fell to about 1.35% in mid-August. Inflation expectations are anchored at or near central bank forecasts – 3.4% and 2.6% at year-end according to the Fed and ECB, respectively – and back to target in the medium term.

But if the inflation naysayers are wrong, the implications both for policy and portfolios are profound, even if inflation does not return to the double-digit rates recorded widely in the late 1970s.

Vivek Paul, managing director and senior portfolio strategist at the BlackRock Investment Institute, part of the world’s biggest fund manager, says: “Our strategic view is that we are positioning for higher inflation. We expect the data to be noisy. This is not a typical cyclical recovery; it is more like a restart.

“However, we still see higher inflation than is being priced by markets and inflation-linked bonds in the US and that is currently among our strongest conviction views.”

The ABC of MMT
The resounding victory of President Joe Biden, together with Democrat gains in both houses of Congress, gave a green light to a macro policy revolution.

Nick Samouilhan, a Singapore-based multi-asset strategist and portfolio manager at Wellington Management, says: “We didn’t set out to answer the question of whether inflation would return, or what this might mean for portfolios. We asked, instead, what had COVID changed? What we zeroed in on is the background within which both monetary and fiscal policy had altered fundamentally. The orthodox frameworks used by policymakers have been dismantled.” 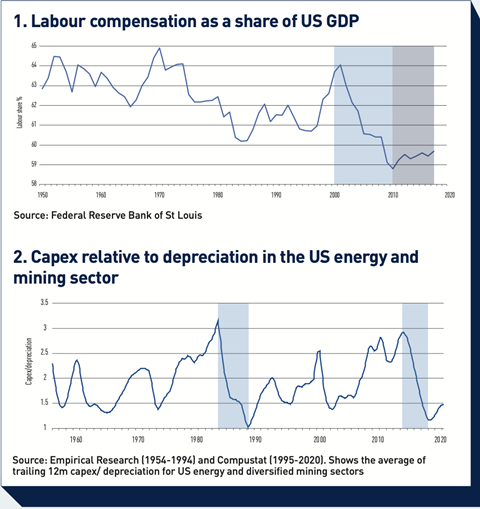 The numbers are well known, but their scale makes them worth repeating. In the US, Biden has enacted $1.9trn (€1.6trn) of direct fiscal stimulus, including helicopter money, with a further $1.2trn earmarked for infrastructure and potentially more for green projects. This comes on top of massive monetary stimulus. The Fed’s balance sheet has expanded by $3.6trn since the start of the COVID crisis.

The direct financial cost to governments around the world of COVID will reach $10.9trn in 2020 and 2021, according to S&P. This is more than 13% of global GDP. The US stimulus embraces the main tenet of Modern Monetary Theory (MMT) – a government that can issue debt in its own currency need not be constrained fiscally, so long as it can keep a cap on borrowing costs.

For Prof Tim Congdon, founder of Lombard Street Research and chair of the Institute of Monetary Research at the UK’s Buckingham University, inflation alarms started ringing as early as spring 2020. Congdon still closely monitors unfashionable economic statistics such as M3 (broad money). In just one month (April 2020) US M3 rose by 7.3%, a figure higher than any full year over the previous decade. 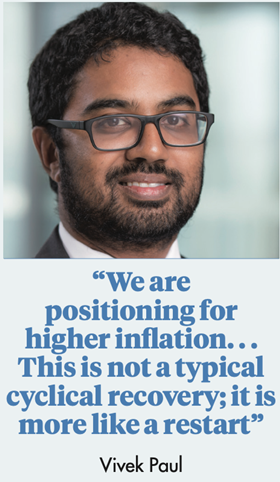 Yet most economists saw disinflation or outright deflation as the likeliest outcome from the COVID shock. “The reason we operate in a monetary framework is because it gets rid of the noise,” says Congdon. “Inflation can only be produced by a more rapid increase in the quantity of money than in output.”

The reaction to COVID differed from the policy response to the global financial crisis (GFC) both in its size and its main characteristics. BlackRock’s Paul frames its magnitude by comparing lost output with the quantity of stimulus. “We lost approximately one-quarter of the output we did during the GFC and its aftermath and the stimulus has been four times larger. That is a 16-fold gap. This is not a one or two-year story, this will have an impact for many years to come.”

How governments spend this money has also changed. “Policymakers used to preach about living within our means and budgetary restraint. That is no longer how fiscal policy works. In a micro sense, the question is: should we build this bridge? If the cost of borrowing is less than the expected return, the answer is yes. If you think about that in a macro context you have a scenario in which fiscal policy drives aggregate demand,” says Samouilhan.

Comeback Kid 2.0
An increase in aggregate demand induced by government fiscal largesse is likely to result in the global economy growing ahead of potential output. Before the globalisation trend of the 2000s, classical economics taught that this would feed into both higher (demand pull) inflation and a tighter labour market. Labour should have greater pricing power.

The relationship between prices, wages and output is captured by the Phillips Curve, which largely fell into disuse. Figure 1 shows that this tide may be beginning to turn.

“My premise is that the Phillips Curve may well be making a comeback,” says Wellington’s Samouilhan. “There are good political, societal and economic reasons for this. No politician can ignore those left behind by globalisation, if they do, the void will be filled by extremists. Secondly, looking at the split of income that goes to labour versus capital, you can see an argument for the need to rebalance that share towards labour.”

The redistribution of wealth can be inflationary. The wealthy tend to save; the less well-off tend to spend more. A third catalyst for structurally higher inflation may be supply constraints.

An inflationary event of the power of the 1970s oil price shock is unlikely to be repeated. Nevertheless, there are strategically important commodities, especially those that will drive decarbonisation goals. Supply dynamics, often due to a lack of capital expenditure spending are frequently poor. Capex is just starting to pick up again as prices rise (figure 2) but mines take many years to become fully operational.

Oil is also arguably supply constrained, although we know there is lots in the ground. The oil majors are desperate to burnish their green credentials, which has pushed exploration down their agendas. As signs of post-COVID recovery took hold, oil outperformed all other asset classes in the first half (H1) of 2021 (+51.4%) followed by industrial metals (+19.7%). Energy was also the best-performing global sector as measured by the MSCI ACWI (All Country World index) with a 26.5% return.

Inflation = rotation
The outperformance of energy and commodities suggests some investors are already preparing for increasing inflation. But many portfolios remain largely invested in some combination of bonds, equities and other liquid securities. An appropriate asset mix depends both on the overall level of inflation and the direction of travel.

Congdon believes US inflation could be headed toward double figures and will remain structurally high, settling above 5%. Of the asset allocation implications he says: “Any fund manager holding nominal government bonds in this environment is guilty of a dereliction of duty. They may as well send the money to the government directly.” In H1 global government bonds fell by 4.9%.

This contrasts with global equities and commodities which this year enjoyed their fifth-best first-half performance in the past 100 years. This is in line with history – the Credit Suisse Yearbook, which uses annual data for 21 countries since 1900, shows that real equity returns remain resilient, even at levels of inflation between 4% and 7%.

However, periods of rising inflation, even from a low base, are bad for equities when prices peak above 5%, according to a study by Man Group. Even believers in structurally higher inflation, such as BlackRock’s Paul, do not think that inflation will stay at these levels.

When framing asset allocation decisions, a new driver is an environment Paul terms the “new nominal”. Nominal yields and (forecast and realised) inflation are no longer moving in lockstep. Instead, yields have remained in a tighter range, which limits some of the downside from holding government bonds from a return perspective, but contributes to them potentially playing less of a hedging role in future downturns.

In some ways, Paul is following the old maxim, ‘don’t fight the Fed’. He says: “The whole point of flexible average inflation targeting [announced at the Jackson Hole Symposium, August 2020] is to send a message to markets that higher inflation is not necessarily a reason for raising rates. The breakdown in the relationship between yields and inflation is a direct reflection of policy.”

The goal of monetary policy seems to be largely driven by a desire to provide fiscal space by ensuring debt is affordable and sustainable. Should quantitative easing (QE) not be sufficient to keep yields in check, the Fed has the nuclear option of yield curve control in its armoury. “Even if nominal yields edge up, I still see this as a positive environment for equities,” says Wellington’s Samouilhan. 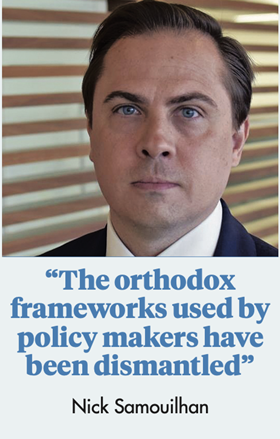 If inflation heads north of 5% and stays there, the likelihood is that neither bonds nor equities will offer a safe haven. One scrap of good news is that real assets are still cheap. Bank of America recently pointed out that the relative prices of real assets are cheaper versus financial assets than at any time since 1925.

Portfolio flows into equities, TIPS, financials, materials and infrastructure funds in H1 were greater than annual inflows over the past 20 years. At the BlackRock Investment Institute, fixed income still plays a role in portfolios, but developed market government bonds are a significant underweight. Equities are favoured over credit and BlackRock has shifted European allocations to overweight and the US to neutral.

This reflects relative valuations (the Euro Stoxx 50 index is still below its 1999 peak) and US cyclicals such as technology and financials have outperformed their European peers. The theme of rotation away from growth darlings towards cyclicals favours the UK and Europe.

Two of the top 10 performers in FTSE 100 over H1 were the big miners, Glencore and EVRAZ.

Larry Summers,  US treasury secretary during the presidency of the original Comeback Kid, wrote a column for the Washington Post in late May, which stated: “Now the primary risk to the US economy is overheating – and inflation”. Summers had a front-row seat during every economic and financial emergency since the Mexican peso crisis. He dismisses Modern Monetary Theory as “voodoo economics”.

Inflation naysayers running pension portfolios might do well to pay heed. “One thing that history has taught us is that inflation returns at the point of maximum complacency,” says BlackRock’s Paul. “Twelve months ago, we could barely get a hearing for our inflation view. More people are thinking our way, but most believe what we are seeing is transitory. We have a strong view that inflation will be structurally higher over the medium term.”