The dollar is in danger of losing its safe-haven status

• Investors are careful in developed currency markets owing to Brexit and Trump’s inability to push through reforms.
• The dollar’s status as a safe haven has been knocked by the euro and yen.
• Fund managers are buying developed markets tactically.
• Opportunities are in emerging markets owing to strong fundamentals.

Investors are heading into 2018 foreign exchange markets with some caution. Many predictions have missed the mark, with few if any expecting to see the yen and euro threaten the dollar’s safe haven status. The general consensus is that emerging markets are now fertile ground for opportunities.

The currency markets have been fluid, with one of the biggest structural shifts being the nature of the dollar as a reserve currency and safe haven, according to Sandra Crowl, a member of the investment committee at Carmignac. The asset manager has allocated over 70% of its assets to euros this year to protect itself against the depreciation of dollar-denominated assets.

Crowl adds: “Currency reserve managers are questioning the status of the dollar as a safe haven, given the lack of visibility and isolationist policies of the Trump administration. Globally, to bring euro holdings back to where they were in 2007, reserve managers will need to buy around €800bn.”

This is a marked change in fortunes after it reached a record high of 104.00 on the dollar index in the run-up to the Trump inauguration. Hopes were high for inflation-boosting stimulus but his bellicose and erratic behaviour has made investors nervous. Not only is there the warmongering media war with North Korea but also protectionist policies that have led the US to pull out of the Trans-Pacific Partnership and threaten the North American Free Trade Agreement. Equally worrying are noises on closing the US protective nuclear umbrella over the North Atlantic Treaty Organisation and its member states.

While the Fed’s third rate hike was flagged, all eyes are on the long-awaited tax reforms which promise to slash corporate rates, reduce the number of tax brackets from seven to three and provide a reprieve for firms that repatriate cash from overseas. “The dollar is in an interesting position as it in in a binary political situation,” says Alessio de Longis, vice-president, portfolio manager and macro strategist at OppenheimerFunds. “If the tax reforms gain traction, then we can see a repeat of the Trump trade but if it were to falter, then there would be a gradual weakening of the currency.”

Ugo Lancioni, head of currency management at Neuberger Berman, is not confident about the success of tax reform but says little is priced by the market. “Although economic growth has been fairly OK in the US, markets have been disappointed by the administration’s failure to deliver much, which has led to the unwinding of the Trump trade, making the dollar one of the weakest currencies year to date. The question is, at what point can any news be positive for the dollar in the medium to long term? At the same time, the picture in Europe has improved as the region has played catch-up.”

The euro, which had risen 13% against the dollar so far this year, has benefited from a solid economy. Figures from Eurostat show GDP accelerated in the second quarter, growing 0.6% compared with the previous quarter. Robust consumer spending and investment offset slower export growth due to a stronger euro.

The markets also breathed a sigh of relief when Emmanuel Macron won the French presidential elections, although the currency dipped when Germany’s Alternative für Deutschland secured 93 seats in the federal parliament. This makes it the third-largest political party in the country and the first substantial far-right representation in parliament since the Nazis. 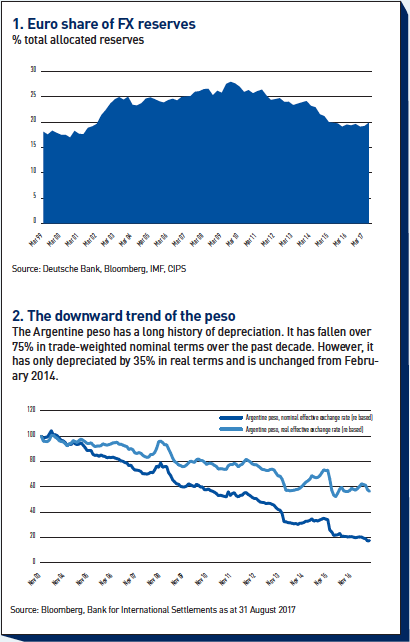 However, the euro is expected to get a boost from the European Central Bank’s plans to taper its quantitative easing from the monthly €60bn in bond purchases. “The euro/dollar appreciation finds support from a valuation perspective, as the pair is now much closer to its purchasing power parity of 1.24 than a few months ago,” says Céline Renucci, strategist at AXA Investment Managers. “However, our behavioural model for the pair fails to explain the euro’s recent upward move against the US dollar, as it goes well beyond short-term interest rate differentials. We think it is related to QE tapering anticipations, similar to what we had observed during the QE expectations period back in 2014-15.”

As for sterling, unsurprisingly, the uncertainty over the Brexit negotiations is taking its toll. While the pound recovered 10% from its 20% precipitous drop against the dollar since the 2016 referendum, many are keeping an underweight position. “When the Bank of England put its head above the parapet and announced it was time for a rate rise, the currency rose to £1.36 but it is our belief that there will be another bout of weakness because the headwinds are not going away,” says Mark Astley, CEO of Millennium Global Investments. “There is no clarity over the Brexit negotiations but also the fundamentals are deteriorating and the country is now one of the weakest economies of the G10, from being one the strongest last year.” 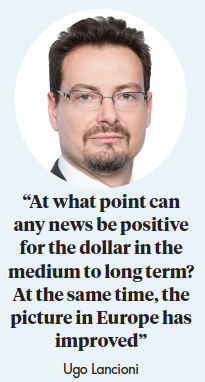 Astley, along with other fund managers, says that there is value in the yen. Neuberger Berman’s Lancioni says: “It is one of the most attractive currencies long term and is certainly cheap against the dollar and euro. A number of central banks are on the path of moving away from emergency measures. The ECB also indicated a gradual reduction in quantitative easing. Major central banks will try to shift policy gradually in a more harmonised way. The BOJ [Bank of Japan] will not be able to ignore economic improvements despite disappointing inflation.”

James Wood-Collins, chief executive officer of Record Currency Management, on the other hand, sees prospects in the carry trade and is long in higher interest rate currencies such as the New Zealand and Australian dollars and short ones such as the Swiss franc and Swedish krona.

Wood-Collins says that the best prospects lie in the emerging markets. All 21 global emerging currencies have had positive carry-trade returns this year, which has been reinforced by low volatility, real yields, external balances and growth dynamics. Although they dipped after the US Federal Reserve’s chief Janet Yellen announced a December hike, the tightening cycle will be gradual and domestic growth has become a more important driver.

“In many emerging markets there has been significant structural adjustments after currencies collapsed due to the euro crisis and the Federal Reserve’s announcement that it was going to start tapering QE in 2013,” says Arnab Das, head of emerging markets macro research for Invesco Perpetual. “Since then, China has re-accelerated, commodity prices have stabilised and global trade has recovered.” 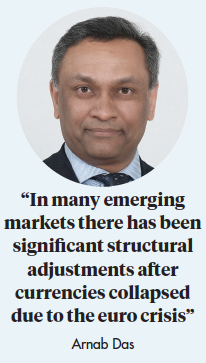 During 2017, emerging markets have grown, with GDP reaching 4.5% year-on-year compared with the 2.25% generated by developed markets. The JP Morgan Emerging Markets Currency index reflected this positive news by hitting a two-year high of 71.76 in September and rallying overall by 10.4% since its November 2016 lows.

“In emerging market currencies we tend to build a long position with funding from three to four developed market currencies such as the yen, euro and dollar,” says Wood-Collins. “Our strategy is based on a combination of the carry trade and structural value and, as a result, emerging markets have been the strongest-performing currency strategy year to date. At first glance, all emerging-market currencies look cheap, but some are cheaper than others and they have different levels of liquidity. We have the highest allocations at the moment to the Indian rupee, based on relative valuations and interest rates.”

Das says that there is value in the Russian rouble because the economy has benefited from the global recovery plus its central bank’s “ultra-orthodox” policy. “While there are sanctions, the macro story makes sense and that is likely to continue,” he adds. “We also had liked the Turkish lira but there is now an increased concern over slowing growth and macro imbalances. There is also the resurgence of political challenges.”

Moreover, many participants are worried about the ramifications of the independence referendum in neighbouring Iraq’s Kurdish region.

Another increasingly popular currency is the Argentian peso, which is undervalued in Latin America. “It has depreciated by 75% in trade-weighted nominal terms over the past 10 years and  we think it is undervalued today by 30% against a large basket of global currencies,” says Crowl. “The depreciation has led to an export recovery in Argentina and, as a consequence, the current account deficit has shrunk and capital inflows have risen through strong foreign direct investments.”