Is the nightmare over? It is easy to forget that just two years ago the euro-zone appeared to be on the verge of collapse. If the currency union had fragmented in 2012 the global financial crisis of 2008–09 would probably have seemed like a tame prelude.

Fortunately the famous promise made by ECB president Mario Draghi in 2012 to do “whatever it takes” to save the euro-zone seems to have proved a turning point. Since then markets have regained confidence and bond yields have risen.

Yet even a few months ago there were widespread fears that North America and Western Europe were threatened by anaemic growth if not a double-dip recession. Relatively few were optimistic about the prospects for the short and medium term.

With GDP growth picking up such fears are receding. According to the latest forecasts from the IMF the euro-zone will enjoy a 1.2% expansion in 2014 compared with a 0.5% contraction in 2013. Growth in the US is forecast to increase from 1.9% to 2.8% over the same period (notwithstanding a major slowdown thanks to the winter freeze of Q1 2014).

The UK, for a long time one of the laggards in the global economy, is perhaps about to enjoy the greatest transformation of all. Growth for 2014 is forecast to hit 2.9% – the fastest among the large developed economies.

Fear of a return to economic stagnation has not disappeared but it is no longer seen as the most likely outcome. This vision of persistently poor growth is sometimes referred to as secular stagnation or the Japan scenario. It would probably involve bond yields approaching or even falling below their mid-2012 lows.

The mainstream scenario, or what could be called the central case, is widely viewed as one of slow but steady economic recovery. This would be accompanied by a gradual increase in interest rates from their current ultra-low levels.

It is a measure of how the economy has improved in recent months that a third scenario is being taken more seriously. This involves the economy growing faster than expected with a consequently higher risk of an inflation shock. It is also possible that the disorderly unwinding of quantitative easing (QE) could create the conditions for this scenario.

• Bond yields remain close to historical lows despite the rises since mid-2012.
• The mainstream scenario is for rates to rise gradually from their current ultra-low levels.
• A relapse to stagnation and above trend growth are both seen as realistic scenarios.
• Institutional investors favour a selective approach in the current environment.

A glance at the graph of changing bond yields over time (figure 1) reveals a striking picture. In nominal terms the yield on 10-year US bonds peaked at nearly 16% in 1981 then fell steadily over time until it reached a low of about 1.5% in the summer of 2012. In practical terms this means that, on average, the owners of bonds have done particularly well over the past 30 years. 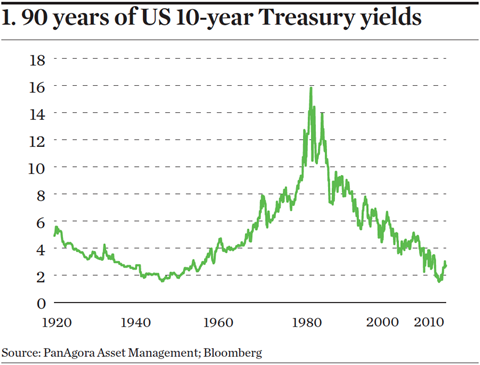 The downward trend in yield can be attributed to several factors, some of which are more contentious than others. It is certainly the case that from 1979 until 1982 the then chairman of the Federal Reserve, Paul Volcker, kept rates high to choke off runaway inflation. Many other central banks followed this example.

It is also indisputable that rates came down after that peak period. Alan Greenspan, the Fed chairman from 1987–2006, often favoured low rates. Whether or not this was always a wise course of action is open to debate. Some critics partly blame Greenspan’s loose monetary policy for the emergence of the American housing bubble in the first half of the 2000s.

There are also several additional theories for the decline in rates from the late 1990s. In a special analytical chapter in its latest World Economic Outlook (WEO) the IMF identified three main factors.

Two of these relate to global shifts that accompanied the rapid growth of emerging markets over that period. First, savings rates increased as emerging markets enjoyed a steady increase in their income. Second, the demand for safe assets rose as many emerging economies accumulated large reserves. Since the early 2000s in particular portfolios have shifted towards bonds.

The third factor relates to the fall in capital investment in advanced economies since the onset of the global financial crisis. The IMF argues that such investment is unlikely to recover to its pre-crisis level in the next five years.

From this analysis the WEO, published in early April 2014, drew the conclusion that “global real interest rates can be expected to rise in the medium term, but only moderately, since these three factors are unlikely to reverse substantially”. In relation to the possibility of an economic relapse it said: “The zero lower bound on nominal interest rates will remain a concern for some time: real interest rates will likely remain low enough for the zero lower bound to re-emerge should risks of very low growth in advanced economies materialise.” It is notable that it did not ponder the possibility that economic growth and inflation might be significantly higher than expected.

Institutional investors might not endorse the IMF’s analytical framework but they do seem to expect the start of a gradual increase in rates fairly soon. In Bank of America Merrill Lynch’s global fund manager survey for April, a net 66% said they expected an increase in short rates over the next 12 months. This compared with 55% in both February and March. However, expectations for a steeper yield curve were falling with a net 22% expecting a steepening in April compared with 39% in March and 42% in February – indicating an expectation that long-dated rates will not rise as fast.

More recently the incoming Fed chairman, Janet Yellen, said in her first speech on monetary policy in her new role that short-term rates are likely to remain low for some time. The Bank of England and ECB have made similar pronouncements. This does not mean that rates will not rise at all but that increases are expected to be gradual.

All the experts interviewed for this article saw the central case of gradually rising interest rates being overwhelmingly the most likely. Not all of them would cite a figure but some saw the probability as 50%, with Nick Gartside, the international chief investment officer within the JP Morgan Asset Management (JPAM) global fixed income group, putting it at 60%.

Of course, central bankers could change their minds if circumstances change dramatically. The shape of the yield curve could also shift. Experts have different opinions on the two tail scenarios.

In contrast, estimates of the probability of a return to stagnation vary widely. For JPAM’s Gartside the chance of the scenarios is remote at only 5%. In contrast, Grant Peterkin, a senior portfolio manager at Lombard Odier Investment Managers, puts it at 25%; down from 50% a few months ago.

Eddie Qian, CIO of the multi-asset group at PanAgora Asset Management, probably speaks for most when he says: “If the economy keeps on this track the likelihood of testing a new low in yields is very limited.”

Opinions about what eventualities might bring about a relapse vary. One possibility is that the euro-zone might lapse into deflation; a concern that came to the fore in March 2014 when inflation fell to 0.5%, its lowest level since November 2009. In April the rate edged up to 0.7%, according to the flash estimate released by Eurostat. 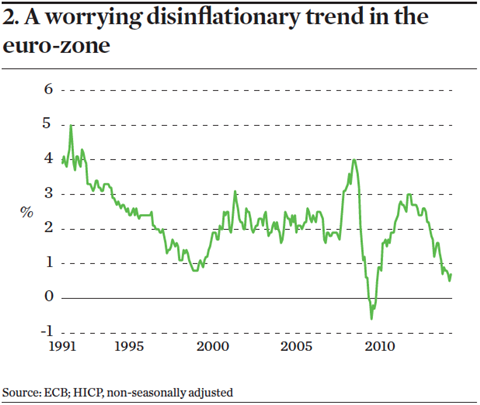 For Peterkin there is a significant chance that falling inflation will turn into stagnation. “There is a strong risk of a deflationary environment in the euro-zone”, he warns. “It’s not just disinflationary”.

Nicolas Forest, the global head of fixed income at Candriam Investors, is much more circumspect about the possibility of such a negative turn in the euro-zone. He says that the inflation rate is probably already close to its low for 2014. “I expect an increase of inflation to 1% in the coming months,” he says.

He also points to improvements in the euro-zone’s troubled banks and to renewed confidence in the authorities. “We have a more positive environment for the banking system in Europe, and we are more confident in government, so we can avoid the deflation scenario.”

Since the possibility of some kind of credit crunch in China is widely recognised many say its effects have already been anticipated. “The problem is well known”, says PanAgora’s Qian.

Léon Cornelissen, the chief economist at Robeco, argues that the Chinese authorities have plenty of ammunition to tackle any crisis. “The Chinese government can do a lot if they see the need,” he says. “It wouldn’t be a bad thing. We have seen some defaults and weakening of the yuan as it could be seen as an attempt to instill some market discipline.”

Although it is not his central case JPMAM’s Gartside puts the risk of an inflationary shock at 35%. Others put it as 25%.

Several managers see rising wages as a key risk in this regard. “Wage inflation is the one statistic that everyone should be looking at,” says Gartside.

In contrast, Robeco’s Cornelissen is sceptical about the possibility of wage rises getting out of control. “The pricing power of labour is low”, he says. “[Fed chair Janet] Yellen is probably right that we shouldn’t overestimate the strength of the labour market.”

There is also the possibility that the unwinding of QE programmes in the US and the UK could unsettle the markets. Signs of this risk were already apparent in June 2013 when Ben Bernanke offered a tentative timetable for the introduction of tapering – that is, a reduction in the rate of asset purchases. In retrospect this pronouncement was widely regarded as a mistake.

“There is definitely a risk of unwinding QE going wrong”, says Lombard Odier’s Peterkin. “We’ve had this extraordinary stimulus and now we’re going to withdraw it. And that’s got to have some kind of effect on yields.”

Against this background it is hard to see many clear patterns for investors. The one area where there appears to be a broad consensus is that investors should be selective. Although there are opportunities for investors they do not exist across the board.

Volatility is also seen as a risk although the ability of the authorities to handle it is open to question. Robeco’s Cornelissen doubts there will be a bond market sell-off of the type the market suffered in 1994. “That was a totally different climate because the ideology of the Fed was to surprise the financial markets,” he says. Nowadays central banks generally try to be transparent.

Most of the experts questioned did not express any strong convictions on investing in different parts of the yield curve. For Lombard Odier’s Peterkin: “From a curve perspective longer dated bonds will outperform shorter dated bonds on a relative value basis.”