4
UK DC: Large funds get in on the act

UK DC: Large funds get in on the act

Mark Thompson, the CIO of the HSBC Bank (UK) Pension Scheme, believes the “investment aspects of defined contribution [DC] are relatively straightforward”. The challenge is “getting the communication and engagement strategy correct”.

This means making sure members receive the right information at the right time. The scheme is increasing efforts to improve communication with members and it recently hired a consultant to work specifically on communication and engagement with members.

Members are actively involved in the reviews of the investment offering, which are carried out every three years, and trustees collect feedback from members through focus groups and the internet.

The last three-year review was conducted in 2014. In the same year, the UK government announced new pension freedoms marking the end of the obligation to purchase annuities. It also introduced the opportunity to access pension pots more easily or draw down cash lump sums.

In 2014, HSBC UK was in the process of closing its defined benefit (DB) fund to future accruals, which was completed in July 2015. Today, HSBC’s pension scheme is a hybrid DB/DC. The DB fund was closed to new members in 1996 and last year 8,500 members of the hybrid scheme were shifted to DC.

The pension freedoms, as well as the developments on the DB side, heavily influenced the trustees’ 2014 assessment of the scheme’s DC strategy. This led to a significant revamp of the DC lifecycle offerings.

Thompson likens the revamped DC strategy to Cerberus, the three-headed guard dog of the underworld in Greek mythology. In HSBC’s case the body consist of a global equity fund and a diversified growth fund (DGF). When members join the scheme, all of their contributions are invested in the global equity fund; and 20 years before retirement assets are shifted to the DGF. 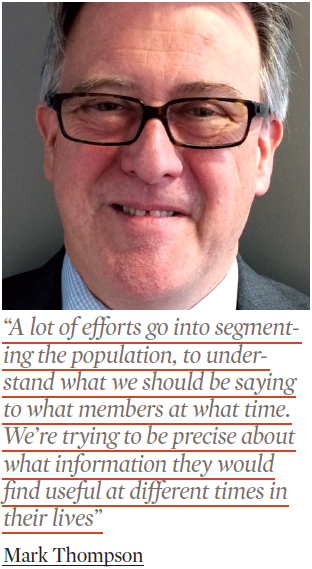 The three heads represent the three different lifestyle strategies offered to members as they approach retirement. Each strategy is suited to one of the three main routes to accessing retirement income in the new UK framework.

The income lifecycle strategy is aimed at members who wish to purchase an annuity at retirement. Their assets are gradually shifted to a pre-retirement fund, invested in long-dated bonds 10 years before retirement. As members reach retirement, three-quarters of assets are invested in paper suitable for backing annuities, with the rest in cash, which can be taken tax-free under current tax rules.

Members who choose the cash lifecycle strategy, those who wish to take out all their pension pot in a cash lump sum, have their assets fully shifted to cash three years before retirement.

The capital lifecycle is designed for members who favour a drawdown solution. Members opting for this strategy will have their assets kept in a DGF. At retirement they will be able to withdraw 25% in tax-free cash. However, the DGF portion of their pension pot could form the basis of a drawdown arrangement.

The HSBC scheme has two default strategies: the income lifecycle strategy for members enrolled after 1996 and the cash lifestyle strategy for the 8,500 hybrid members, which owing to the closure to new accruals in the DB scheme were moved into the DC scheme. Hybrid members have significant DB allocations in the scheme, and are likely to take their DC pot as part of their tax-free cash lump sum on retirement.

For the time being, says Thompson, the scheme is unlikely to start offering a direct drawdown capability. Members searching for a fully-fledged drawdown solution will have to leave the scheme and find another provider. It is early days for drawdown in the UK, says Thompson: “We are watching how the market develops, rather than rushing in to identify the first answer that seems correct, because it’s an evolving picture at the moment.”

Still, Thompson says the three-part lifecycle approach provides the investment infrastructure to answer all questions and eventualities, reflecting the implementation of the pension freedoms. But the CIO insists that the work does not stop there. “The strategy has to dovetail with our communications and engagement strategy,” insists Thompson. With the help of the communication consultant, the scheme works with the new joiners “to understand how they perceive what we’re doing, and how we can improve upon it,” he says.

The scheme’s administrator provides regular feedback on what members are choosing. “A lot of efforts go into segmenting the population, to understand what we should be saying to which members at what time. We’re trying to be precise about what information they would find useful at different times in their lives.”

Clearly, however, the strength of a DC offering will also depend on basic elements, such as the level of employer contributions. In this sense, the HSBC Pension Scheme stands out. For the first £20,000 (€27,000) of pensionable salary, the employer contributes 10%.

A further 9% contribution is added for salaries above £20,000. The bank also matches 7% of employee contributions, meaning an employee earning £20,000 per year and contributing 7% of that value will save 24% into the scheme. Furthermore, the sponsor pays in full the annual management charges for the funds that the scheme invests in. Perhaps such generosity is as important for the success of the scheme as is an efficient design of the DC strategy.

To provide greater access to workplace pensions and to bolster retirement savings, the UK government implemented an auto-enrolment policy in 2012. Policymakers recognised, however, that smaller employers would not have the necessary resources to establish their own scheme and would need access to an external pension provider. The National Employment Savings Trust (NEST) was established to ensure these companies and low-income savers would have a low-cost, high-quality auto-enrolment option.

Building a new DC scheme enabled NEST to start with a blank sheet of paper. Mark Fawcett, CIO of NEST Corporation, says: “Our first steps were to look at the best DC practice around the world as well to understand our scheme members’ attitude to risk and loss.”

The master trust needed to provide pensions for a broad range of employees – both in terms of age range and income. Fawcett says: “Our members have annual incomes of £7,500 (€10,000) up to £40,000 which covers up to 80% of the UK working population.”

Using these findings, NEST set out its investment strategy. Investment risk is usually rewarded with decent returns but a passive implementation is generally more efficient and cost effective than using active managers. Valuations of assets and the economic and market environment should impact the scheme’s asset allocation. Risk should be managed dynamically, and environmental, social and governance (ESG) risks should not be neglected.

NEST determined that asset diversity was one of the most effective ways to manage the risk of the overall portfolio. The size of the master trust’s membership gives it greater asset choice – it can invest in illiquid assets as it is able to create an internal market.

While NEST’s default investment approach is to use passive investment vehicles, it will change that strategy according to the characteristics of the asset class. Fawcett says: “For example, a passive approach is not effective in credit markets as indices are poorly designed, so we use an active manager.” The fund aims to use its limited management fee budget on asset classes where a more active approach can make a real difference.

Customised approaches are also taken. “We have used a passive index for the emerging market equity allocation but it is tilted towards companies with a favourable ESG profile as well as a fundamental smart beta product in this asset class,” says Fawcett. 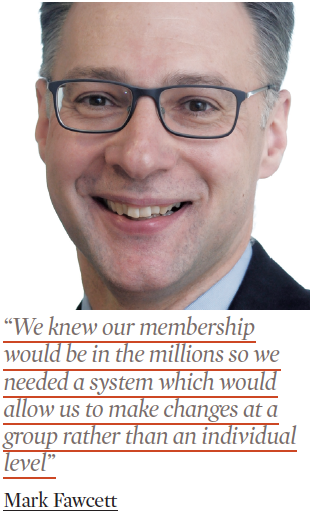 Using these two different approaches enables NEST to determine how it can use different index tilts, not only to access different return drivers but also to see how these approaches manage portfolio risk. As the assets increase and the trust’s knowledge of the interaction of these strategies grows, it is likely that it will make more use of smart-beta strategies in developed equity markets.

Once NEST has decided which vehicle it wants to use to access each asset class, it carefully selects the right manager. Fawcett says: “We are governed by public-sector procurement law which enforces a strong discipline to clearly define your requirements in advance.” Considerable resources are invested in selecting each manager, including members of the risk management, ESG and operations.

Not only is there an overarching investment strategy for the fund but its analysis of member behaviour was used to determine how that strategy should be refined for different age groups.

Analysing the members’ attitudes to risk revealed that very young members are more worried by market falls than older members.

“We developed a foundation stage for our very youngest members, which has a reduced volatility to prevent them from opting out,” says Fawcett. Even though this stage of the investment process is lower risk, it still uses a multi-asset portfolio.

Every investment phase of the scheme is assigned a particular risk budget, based on how much risk needs to be taken for each stage during a normal market cycle. For example, during the growth phase – into which members are moved at the age of 30 – the fund targets annualised volatility of 10% to 12%. The portfolio can be dynamically adjusted as the market environment changes to ensure this goal is met.

Once a scheme member is about 10 years away from state retirement age, they are gradually moved into the at-retirement portfolio. Fawcett says: “Now that pensioners are no longer required to purchase an annuity on retirement, we have a portfolio with an inflation-plus target.” This gives members the most flexibility as it is an appropriate goal for the purchase of annuities, income drawdown and cash.

As the member approaches retirement, the equity allocation is decreased while more matching assets are added, such as Gilts with a maturity that matches the state pension age along with a decent weighting to corporate bonds.

Fawcett says: “We decided that a target-date fund [TDF] was the best way to implement this strategy.” The key benefit of a target-date fund is that it allows NEST to manage risk throughout the glide path of the scheme member. “Risk can be varied for different member cohorts as well as allowing us to implement a dynamic risk management strategy according to the market environment.”

Along with improved flexibility, TDFs are much more efficient than traditional lifestyle products. This was a particularly important consideration because NEST is destined to become one of the largest DC providers in the UK – according to the Pensions Policy Institute, the provider will have £200bn under management by 2050. Importantly, the TDF also facilitates the transfer of illiquid assets among NEST’s membership.

Fawcett says: “We knew the membership would rapidly accumulate and would be two to four million by the end of 2017.” The auto-enrolment process has just passed the halfway point and the current membership is 2.6 million. “We knew our membership would be in the millions so we needed a system which would allow us to make changes at a group rather than an individual level.”

To ensure that the running of the fund is kept on track and adheres to its principles, the fund reports to the investment committee every quarter.

Fawcett says: “We look at any deviations away from our targets as well as how risk is being managed, asset allocation and manager performance.” In turn, the investment committee reports to the trustees once a year.