Political uncertainty means Romanian pension funds will have to wait for clarity on an increase in the second-pillar pension contribution rate, according to Gail Moss

• Romania’s second-pillar funds are achieving healthy, steady returns.
• Investment rules have been relaxed further, with more scope for ETFs and sovereign bonds.
• Statutory contributions have been raised but are still behind target.

Romania’s mandatory second-pillar pension funds have achieved a healthy investment return over the past year. Figures from the Romanian Pension Funds Association (APAPR) showed that the annual average return for the year to September 2016 was 5.08%, taking the annualised return since its inception in May 2008 to 9.6%.

However, at a political level, the direction of pensions policy has been unclear.

The prime minister, Victor Ponta, resigned in late 2015 after a corruption scandal and since then his successor Dacian Cioloș has led a government of technocrats. Neither of the two largest parties was expected to achieve a majority in the December 2016 general election, so a coalition is expected.

Despite this political uncertainty, the Romanian second pillar has maintained its equilibrium, compared with other countries in the region.

“We strongly believe that nationalisation is off the table, irrespective of the political colour of the government,” says Mihai Bobocea, an adviser to the APAPR board. “Lately, following our efforts to communicate with the political spectrum, we have seen a significant increase in awareness regarding the need to continue building up private pension schemes in our country.”

Notwithstanding this reasonably benign situation, areas of concern still persist. Arguably the most important is the recent stalling of planned rises in employer and employee contribution levels.

The 2008 pension reforms contained provisions for a statutory 0.5 percentage point increase per year in contributions, with a target of reaching 6% of employees’ gross salaries by 2016. In 2015, the contribution rate was raised to 5%, from 4.5% the previous year.

Low participation in the third pillar

A cause of concern in Romania is the low participation in the third (v oluntary) pillar, which remains underdeveloped. Nine years after it was launched, the system has attracted only 400,000 members, out of an estimated potential market of 1.5m, according to APAPR.

The reasons for this range from the lack of purchasing power and financial literacy to burdensome regulations, which have rendered the products conservative.

The pensions industry has worked with the regulator to address the issues, but with limited successso far.

However, Alina Nacu, CIO, Allianz-Tiriac pension fund says: “The penetration of the third pillar is rather low now but we see potential in some initiatives like introducing occupational pensions. These would still be third pillar funds, but different in terms of the sales process, which would have a corporate approach, as compared to the current retail focus. Also, schemes might require participants to fulfil certain conditions before their pension rights are irrevocably acquired, or vested.”

She also sees a potential increase in deductibility levels, but adds: “We see none of these initiatives as imminent, rather as medium-term objectives.”

The draft budget – still being prepared by the government at the beginning of December 2016 – suggests the 2017 increase is likely to be to 5.5%. Previously, the finance minister had suggested that the increase would be 0.9% to make up the lost ground.

“However, with December’s general elections looming, and huge uncertainty regarding the next government’s views on the second pillar, we cannot be sure about this 5.5% figure,” warns Bobocea. “We will most likely have greater certainty in January or February.”

Meanwhile, the past couple of years have seen progress in introducing more investment flexibility for second-pillar pension funds, albeit at a slow pace. 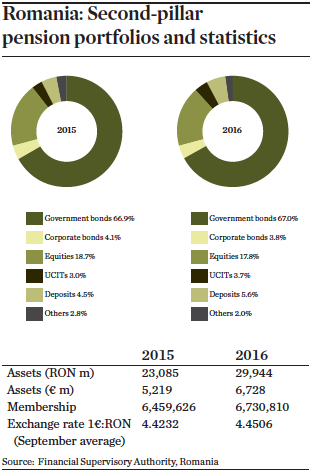 After some debate between pension funds and the regulator, the Financial Supervisory Authority (FSA), the latter agreed to raise the limit for exchange-traded funds (ETFs) to 5% of total pension fund assets.

But, there is still scope for some further relaxation, says Alina Nacu, CIO, Allianz-Tiriac pension fund. “There have been several discussions with the supervisor for updating the investment norms, in terms of making the portfolios more flexible by allowing a higher allocation towards ETFs or UCITS, subject to some cumulative constraints,” she says, adding that she expects the new norms to be published in the first quarter of 2017.

The FSA has also agreed to allow investment in bonds two credit ratings below sovereign; previously, only one notch was allowed. Although agreeing this new relaxation in principle, the FSA has yet to officially adopt it, although APAPR was hoping for the new rules to come into force from 1 January 2017.

Even so, this is an underwhelming advance, according to Bobocea.“Judging by the small scale of changes in the investment norms and the general conservative stance of the pension funds, I expect the new changes to have only a very limited impact on funds’ general asset allocation next year,” he says.

The part-privatisation of state-owned companies is continuing, increasing the universe of investable stocks for pension funds, although 2016 has been drier period than previously in terms of offerings.

Bulgarian pension funds have been preoccupied with legal challenges to government policy.

In 2015, the government allowed people to opt out of the second pillar and not return if the first pillar proves to be a better option. This choice is available until five years before retirement.

“Together with a second pension fund we went to the administrative court to clarify some details of this decision,” says Miroslav Marinov, executive director at Doverie pension fund, part of the Austrian VIG Group.

“The administrative court then decided that the decision might actually be a constitutional matter and transferred the case to the Constitutional Court – so we are waiting for a decision, probably in the first half of 2017,” he adds. 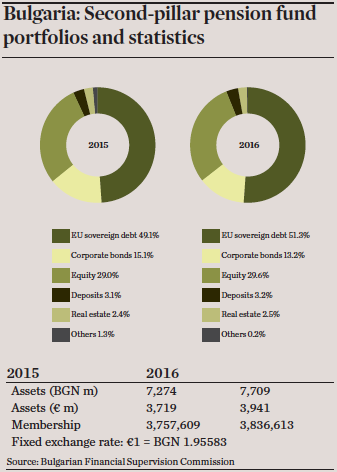 In a paper on Bulgaria published in autumn 2016, the IMF calculated the long-term impact of a complete and partial shift to the first pillar. “The newly-established option for unlimited shifts between pillar one and pillar two could further increase fiscal pressures”, the report says.

If all workers had decided to shift to the first pillar in 2016, pension spending would increase by 3% of GDP in the short-term.

“Nevertheless, the net fiscal impact of the shift scenarios is positive compared to the no-shift scenario in the medium term because the government will receive additional social security contributions.”

Bulgarian pension funds have also had their hands full with a qualitative asset review initiated by EIOPA. For this, each pension company had to contract an auditor to assess investments, the investment process, reporting and auditing.

However, part way through the process, the Bulgarian supervisory authority FSC found alleged malpractice at one of the contracted auditors, RSM Bulgaria. Now some companies that had used RSM will have to redo the exercise.

Nevertheless, the FSC noted that it was still aiming to finalise the review by year-end 2016. The data will then be evaluated by a committee consisting of representatives of the FSC, EIOPA and Ernst & Young.

In its report, the IMF notes that the review of second-pillar assets was done “in response to a general concern about the viability” of second-pillar pensions. The review “is expected to help the government identify the weaknesses of the system and policy options going forward”.

However, it has to be noted the alleged mistrust of second-pillar pension funds was incited by political groups wanting to transfer the assets to the first pillar. As far back as summer 2015, a parliamentary committee had found no wrong-doing among providers.

Any plan to close the second pillar has been abandoned by the government for now. Marinov notes: “The public deficit has shrunk and we hope that the idea will not be on the agenda again anytime soon.” The second pillar manages close to €4bn, or around 11% of the Bulgarian GDP.