Since the autumn of 2017, hardly a week has gone by without a mass demonstration taking to the streets of large Spanish cities.

Although diverse in their demands, the protests have centred around the issues shaking the foundations of the country’s political, territorial and social structure – from the Catalan crisis, to corruption; from the fight for gender equality, to the future of pensions.

In an unprecedented move, pensioners staged several large national protests in March to demand fairer pensions for them and future generations.

The trigger that pushed thousands of the elderly to march – carrying signs that read “Ladrones” (thieves) – was a letter from the Social Security department stating their pension would increase by only 0.25% this year. This is the lowest increase possible under the annual pension revaluation index introduced in 2014.

Although the tiny rise matched previous years, higher inflation (1.1% at the end of 2017) means pensioners will suffer a real-terms loss of purchasing power this year.

Why was this relatively small loss – less than €8 a month for the average pensioner – severe enough to drive such a large social response?

The recent mobilisation of pensioners is the result of a perfect storm, threatening the sustainability of the state pensions system: a combination of an economy trying to recover from the financial crisis, high unemployment, weak job security, political instability, and unfavourable demographics.

According to a recent OECD report, population ageing will accelerate at pace in Spain in the coming years. It will have the second-highest old age dependency ratio among OECD countries in 2050, after Japan.

The pay-as-you-go state social security system has continued to pay generous pensions, with replacement rates for full career workers of around 80%. The average retirement pension is just over €1,000 per month, and higher for the newly retired.

Against this backdrop the future looks bleak, with reports indicating that the replacement rate of the average state pension could be reduced to as little as 50% in a few decades. 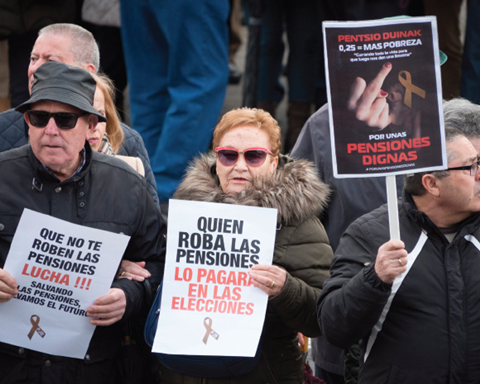 The reduction in future state pension payments should drive demand for complementary pension savings in the form of second- or third-pillar pension funds. So far, this has not been the case.

According to data from investment and pension fund association INVERCO, 8m people had a complementary pension plan at the end of 2017, of which only 2m were members of an occupational pension scheme (Spains’s total population is 46m).

Assets accumulated in the complementary pensions system is equivalent to about 10% of Spain’s GDP, roughly the same amount needed by the system to pay pensions every year. In comparison, OECD data shows Denmark’s pension assets to equal 136% of GDP, and the Netherlands’ to equal 116%.

There is little political will to discuss the role that private pension plans could play in future provision. Instead, chronic short-termism and electoral considerations seem to be central to the pension debate. After all, there are 9m pensioners in Spain – or 9m loyal voters.

Opposition parties and trade unions have accused the government of favouring the development of private pensions over fighting for the survival of the public system, a message echoed in the demonstrations.

Similarly, the government has been criticised for its use of the Fondo de Reserva de la Seguridad Social, known as the ‘pensions’ piggy bank’. The reserve fund reached its peak size in 2011 with €66bn but closed 2017 with just €8bn, after continuous tapping by the executive. 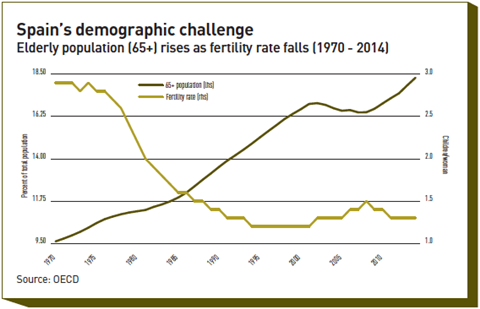 “There has been a tendency in some parts of the political spectrum and the unions to say that the development of private [pensions] is to the detriment of the public system, when that’s not really the case. The private complements the public,” says Diego Valero, chairman of pensions consultancy Novaster.

For Valero, the whole pensions system needs to be reviewed in “an objective and serene way”. He laments the lack of proposals, such as the possibility of implementing an auto-enrolment pension system, similar to the UK’s NEST.

“I think [auto-enrolment] would make a lot of sense in Spain, starting little by little, and making it grow. But that debate is not yet on the table,” he adds.

Jordi Jofra, chairman of the board of trustees of CaixaBank’s occupational pension plan, sees the lack of information about what to expect from their state pension as one of the reasons putting people on the streets.

Under a 2011 law, Spanish people are supposed to receive detailed information about what they are likely to get on retirement. “This has not been fulfilled, complicating things further,” Jofra says. “When you are uninformed and the only message you receive is that there is not enough [money] and that pensions are going to be cut, that’s what mobilises people.”

With the certainty that future state pensions are going to be lower, Jofra says the complementary pensions sector needs to address the challenges.

“We are going to have to help more people to get where the government cannot reach,” he says. “These are complementary pensions, never a substitution. This is always our message.”