Prudential has proposed a blended finance model that would finance the premature decommissioning of coal-fired power plants in Asia. The model, known as the Energy Transition Mechanism (ETM), would work using public-private partnerships formed from a group of financial institutions whose confirmed members include banks HSBC and Citi alongside the Asian Development Bank (ADB).

ADB has allocated about $1.7m (€1.4m) to study the feasibility of the concept in Indonesia, the Philippines and Vietnam. “We conceived the ETM and are working with ADB to validate its feasibility,” says Don Kanak, chairman of Prudential’s insurance growth markets. “The ETM would provide financial and technical support to developing countries to allow them to replace coal-fired electricity quicker than would otherwise be possible without the assistance.”

Kanak says the ETM would comprise of two complementary financial facilities – a carbon-reduction facility (CRF) and a clean-energy facility (CEF). Current owners agree to transfer their carbon-intensive power assets to the CRF in exchange for cash and possibly equity interest in the ETM. Those utility asset owners – in many cases state-owned power companies – are then expected to invest the cash they receive into renewable power and grid upgrades, including a just transition for workers and local communities.

The proposed CRF would buy and operate coal-fired power plants at a lower cost of capital than is available to commercial plants, allowing them to run at a wider margin but for less time in order to generate similar returns.

The coal-fired power assets would continue to operate for a shorter period than the current expected lifetime, but long enough to pay back the ETM investors/lenders. Meanwhile, the CEF collaborates with national authorities and the power sector to build up renewable-energy capacity and storage. As renewable power expands, the ETM retires CRF assets. The economics and speed of transition will vary according to the circumstances of each country.

To retire 50% of a country’s capacity early at $1-1.8m/MW suggests that Indonesia would require a total facility of $16-29bn, the Philippines would require $5-9bn and Vietnam $9-17bn, according to Kanak.

Experts originating similar ideas to accelerate the energy transition include the high-profile Rocky Mountain Institute based in the US, which specialises in sustainable energy research. In 2020 it proposed a refinancing plan that could generate net financial savings of over $100bn by 2025. Meanwhile, a report by the Institute for Energy Economics and Financial Analysis suggests that repurposing coal plants into solar and battery in India could be more economical than decommissioning them.

Weighty political, philanthropic and finance players showed they could work together to mobilise climate-friendly investment when the Climate Finance Partnership (CFP), a blended finance vehicle devoted to climate infrastructure across emerging markets, raised $250m at first close in July this year. CFP was conceived at the One Planet Summit in September 2018 under the leadership of French President Emmanuel Macron and is managed by BlackRock.

The governments of France through the French Development Agency (AFD), of Germany through KfW Development Bank (KfW), and of Japan through Japan Bank for International Cooperation (JBIC), together with the Grantham Environmental Trust, the Quadrivium Foundation, and an unnamed private foundation, committed a combined $112.5m in ‘catalytic’ capital.

This has been used to mobilise a broader institutional capital, starting with commitments from Dai-ichi Life Insurance, a leading European pension fund, and a key strategic banking partner, Standard Chartered Bank, as well as MUFG Bank, which together are the first institutional investors in CFP. The partnership is targeting a fund amounting to at least $500m by summer 2022.

BlackRock describes the fund as ‘unique’, and observers agree, because the involvement of such a major asset manager in this type of partnership is unheard of. “Development finance providers teaming up with the largest asset managers is more than ever needed to fill the SDGs’ financing gap – exacerbated by the COVID pandemic,” says one blended-finance expert at the OECD.

CFP will invest in selected countries in Asia, Latin America and Africa. The fund’s focus on the climate infrastructure sector could include grid-connected and distributed renewable-power generation, energy efficiency in residential, commercial and industrial sectors, transmission or energy-storage solutions, and ultra-low emission or electrified transportation and mobility services.

A lifecycle approach in Uganda

It may be small fry in global terms, but a 42MW hydropower project in Uganda due to start operating this year adds another 5% of renewable energy to the National Grid. The project is funded through Climate Investor One (CI1), an innovative blended-finance facility founded in 2015 by Dutch development bank FMO and Phoenix InfraWorks, an infrastructure finance specialist.

Like many blended-finance facilities, CI1, which is dedicated to renewable energy in developing countries, attracts commercial and institutional investors using a first-loss tier as protection against financial risk.

For CI1 this amounts to 20% of the construction fund and is supplied by donor countries. A second tier amounting to 40% of capital is supplied through ordinary equity from commercially oriented investors such as FMO and other development finance institutions. The final tier consists of preference shares from other investors such as export credit agencies and pension funds.

Unlike other blended-finance facilities, CI1 combines all phases of projects into one bundle of three funds run by the same organisation: development, construction and refinancing – a unique feature that significantly reduces risk, especially if they are too costly to invest in as a single project. This characteristic is most typical of low-wattage projects.

“It is difficult for a small project developer to prepare and build a single project, incur search and transaction costs of finding investors, and then resell the project to a different set of investors. CI1 considers all this to be costly in developing countries, adding all sorts of risks. The facility thus combines all three phases,” says Bella Tonkonogy sustainable finance expert working with the Global Innovation Lab for Climate Finance (GILCF), which devised the fund concept and structure. 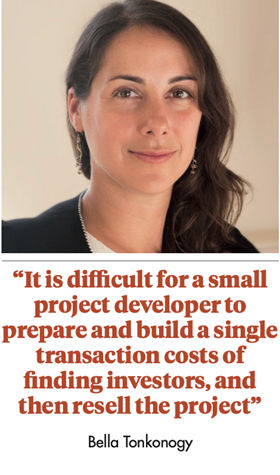 “Due to risks reduced as a result of the facility’s structure, it is able to diversify into different projects in many different countries,” Tonkonogy adds. To date, the facility has invested in solar, wind and hydropower projects in Africa and Asia.

Combining project stages seems an obvious way to reduce uncertainty and improve likelihood of continuity, but the CI1 structure has few antecedents. Its launch opens up promising avenues. “CI1 has been wildly successful and has shown how you can address a lot of these investment barriers all at once.”

That effectiveness may be demonstrated through the initiation of another similar facility by the Dutch government, known as Climate Investor Two (CI2) in 2019. This, when it comes on stream, will replicate the CI1 structure but focus on water, oceans and sanitation sectors, including municipal and industrial water and wastewater supply; desalination; and waste and wastewater to energy.

Other institutions aiming to replicate CI1 include Indonesian development bank PT Sarana Multi Infrastruktur, which has formed its own blended-finance facility, SDG Indonesia One, using the same whole lifecycle approach.

Projects building immature technologies are well suited to this fund structure, according to Tonkonogy, who suggests renewable-energy projects may need less over time due to improvements in cost-competitiveness. “Water and sanitation are the next frontier of climate-related investments that need this kind of innovation,” she says.