Global carbon markets are expanding as prices increase, with consequences both for companies and their investors

The price paid by companies to release carbon dioxide in the atmosphere looks set to rise in the coming years as global governments increase their efforts to tackle global warming.

Ahead of the 2021 United Nations Climate Change Conference, COP26, policymakers are facing calls to raise existing carbon taxes or to introduce new ones.

Meanwhile, emissions-trading systems (ETSs) are being implemented or scaled up in some countries.

Signatories of the initiative have called on governments to “back their net-zero targets with effective, robust, reliable and fit-for-purpose carbon pricing instruments, consistent with the Paris Agreement, to facilitate a cost-efficient investment path to reach net-zero emissions”. 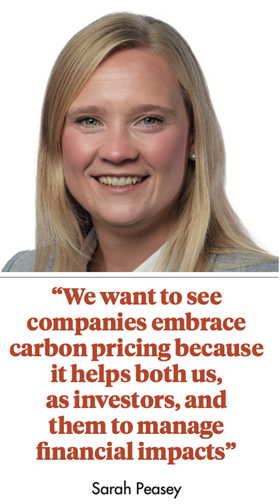 Keronen adds: “By effective, we mean a mechanism that contributes to emission reductions and investment in carbon-free alternatives. There has been surprisingly little focus on how carbon-pricing mechanisms contribute to those two objectives.”

At the same time, if carbon-pricing initiatives do not prove effective, there is little incentive for policymakers to pursue improvements, rather than push standard regulation, Keronen argues.

However, where ETSs have been implemented and combined with other policies, the effects are tangible, says Josh Burke, senior policy fellow at the Grantham Research Institute on Climate Change and the Environment, part of the London School of Economics and Political Science.

Burke says: “Remarkably, coal-based power generation in the UK has gone 40% to 2% of the total in the space of five years. That was largely driven by having a strong framework for carbon pricing, and it was possible even though the price was relatively low. Under the right circumstances, a combination of taxes, subsidies and a carbon-pricing mechanism can work effectively.

“However, policymakers need to think creatively about the use of revenues from emission-trading schemes and carbon taxes in order to make sure that higher prices or taxes are politically acceptable,” Burke adds. 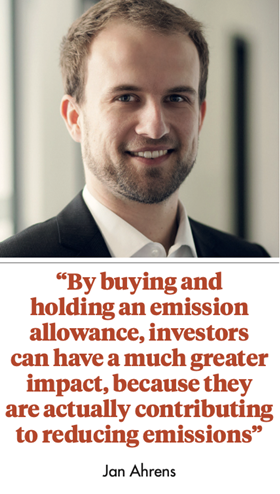 A market in its infancy
From one perspective, global carbon pricing seems to be in its infancy. As of April 2021, there were 64 carbon-pricing initiatives globally, covering 21.4% of global emissions of greenhouse gas, according to the Carbon Pricing Leadership Coalition, a global partnership between governments, businesses and other organisations administered by the World Bank.

Carbon taxes and ETSs generated $53bn (€45.5bn) of revenues in 2020, but the differences across regions are so large that at global level, the average cost of emitting carbon dioxide is extremely low.

According to the recently launched Real Carbon Price index, an aggregate measure of global carbon prices, the price of emitting one tonne of greenhouse-gas in the atmosphere is under $4.50.

The index was launched by a network of academics and business people that comprises two technology businesses – Spark Change, a European specialist in investment in carbon instruments and C2Zero, a company that removes carbon allowances from the market – as well as the Monash Centre for Financial Studies, part of Melbourne-based Monash University.

Within regional ETSs, prices are far higher. In the EU’s ETS, by far the largest and most advanced globally, the price edged towards €65 in early October (see figure).

However, the low global price shows how far global carbon markets have to go before having an impact on emissions-reduction targets.

Jan Ahrens, head of research at Spark Change, says: “The current price is nowhere near where we need it to be, if governments are to reach their climate ambitions.

“It’s a very fragmented picture. While it costs €65 per tonne to emit carbon in Europe, there are many regions where it costs nothing. But what we tried to do with the index is to put together all the data points to show the level of dispersion, and that if you sum it all up, since it is a global problem, the price is way too cheap,” adds Ahrens.

An influential 2017 report by the Carbon Pricing Leadership Coalition, concluded that the global price of carbon needs to be $50-100 per tonne by 2030 to achieve the Paris Agreement’s temperature targets.

The report adds that, while more accurate carbon pricing is a necessary step, a carbon price of $100 per tonne alone will not be sufficient to slow down global warming to well below 2°C. The report concludes that a combination of policies, including heavy investment in emissions-cutting projects and technologies, is needed.

Leaps and bounds
While the gap between the global carbon price and the CPLC’s target may seem very large, there are ample signs suggesting that global prices will trend upwards in the coming years.

The EU’s ETS is being developed further. In January 2019, a market stability reserve (MSR) was introduced to address situations where a drop in economic activity causes a surplus of carbon allowances and a subsequent drop in prices. The MSR simply adjusts the supply of carbon allowances according to predefined rules. From this year, the EU’s annual emissions cap is also being reduced faster.

In keeping with the EU’s ‘Fit for 55’ agenda, which targets a 55% reduction in carbon emissions by 2030, the bloc is working on the introduction of a carbon-border adjustment mechanism (CBAM).

The measure is to address ‘carbon leakage’, which can happen when carbon-intensive activities are relocated outside of the EU, in locations where carbon allowances are cheaper. Essentially, importers into the EU will have to cover the emissions generated during production of goods outside the EU. The CBAM will initially apply to carbon-intensive sectors such as cement and steel production, but the EU plans to roll out the system to all sectors by 2026.

“That is how Europe can push other countries to adopt similar climate legislation, by creating an incentive to do so. It can work much more effectively than lengthy and painful discussions at global conferences,” says Ahrens.

In the US, there is no federal carbon tax, but 13 states have implemented carbon pricing initiatives, some of them quite advanced – and more states plan to do so. However, the US seems more likely to maintain a policy mix consisting of environmental regulations and standards and carbon pricing, rather than focusing on a national carbon-pricing system. There are even suggestions of a federal carbon-border adjustment mechanism, instead of a nation-wide market.

A potential game changer in global carbon markets is China’s national ETS. Ahrens says: “They are doing something very smart. They have trialled different emissions-trading systems with slightly different rules in several provinces for a few years, to collect data and learn which works best.”

China’s ETS is already three times the size of the EU’s scheme, but only covers coal-fired power plants and foresees a large number of free allowances, which causes prices to be low. “However, the government has been very clear that they will expand the scope of the ETS to other industries and reduce the number of allowances at some point,” says Ahrens.

Carbon border adjustment mechanism: a system by which importers pay a levy to match the domestic carbon price.
Carbon allowances, permits or offsets: Permits to release carbon dioxide and other polluting gases in the atmosphere. They can be mandatory – for instance, under emissions trading systems, or voluntary.
Carbon tax: a tax levied on the amount of carbon released by industrial activities.
Emissions trading system: the creation, distribution and trading of carbon allowances. The government sets the number of allowances available and distributes a number of free allowances. The remaining allowances are distributed through auctions. Holders of allowances can trade them on a secondary market (a ‘cap-and-trade’ system). The number of allowances is set to decrease over time to meet emission-reduction targets.

New parameters
These developments represent a strong incentive for investors to increase the use of carbon pricing in climate-risk modelling.

Edward Baker, technical head for climate and the energy transition at the PRI, says: “Putting a price on carbon is a way for investors to integrate climate change into their modelling analysis.”

He continues: “Carbon pricing also has systemic relevance for investors. As net-zero portfolio-emissions targets become more commonplace, it becomes increasingly clear that implementing a 1.5°C portfolio is not enough if the rest of the economy is on track for four degrees.

“For that reason, investors should reflect on their public positions and their advocacy efforts on carbon pricing. Until recently, they have not had much influence in this area. But it is becoming clear that it is very relevant for them.” 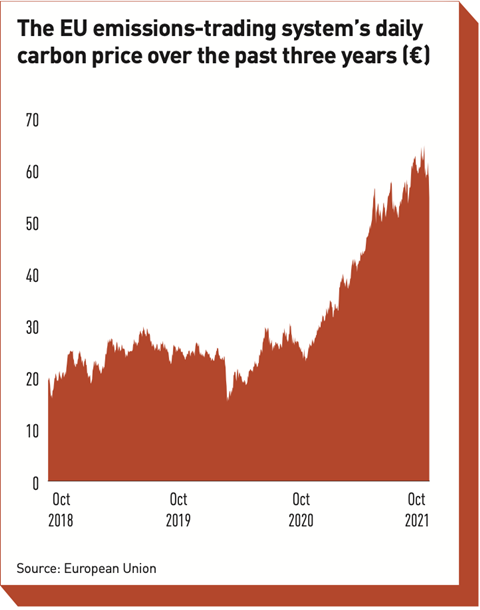 The use of carbon pricing is one of the key recommendations of the Task Force on Climate-Related Financial Disclosures (TCFD). Asset managers already see it as an important tool, despite the challenges associated with it.

Sarah Peasey, director of European ESG investing at Neuberger Berman, says: “Using carbon price in climate-risk modelling has become incredibly important, because it is a forward-looking metric and helps us to understand whether to stay invested.

“Simply looking at a company’s carbon emissions is not enough. We need to consider the impact of different carbon prices on a company’s costs and the demand for its products or services under different scenarios.”

Being aware of the developments in carbon pricing also allows asset managers to engage more effectively with companies, adds Peasey. “Ultimately, we want to see companies embrace carbon pricing because it helps both us, as investors, and them to manage financial impacts to a far greater extent. It allows for a richer conversation with investee companies,” Peasey says.

The secondary market for carbon allowances also represents an investment opportunity, thanks to several existing exchange-traded products and derivatives.

However, most products may not be useful in terms of portfolio decarbonisation, Ahrens says, because they do not actually remove carbon allowances from the market.

His outfit, Spark Change, promises to fix that problem, by offering direct exposure to the value of physical carbon allowances.

“By buying and holding an emission allowance, investors can have a much greater impact, because they are actually contributing to reducing emissions. Furthermore, carbon allowances are less volatile than commodities and uncorrelated to equities,” says Ahrens.