Financial institutions can now explore a map of the world’s cement, steel and iron plants and their owners – and it will cost them nothing. The original data brings to light production facilities whose location and existence were previously unknown, except perhaps by local communities. It was released by the Spatial Finance Initiative run through the new UK Centre for Greening Finance and Investment (CGFI).

More such investigations will follow as part of an ambitious global effort at the centre, which launched in February with £10m (€12m) from the UKRI – the government agency funding research and innovation. “Part of the centre’s role is about sequencing the real economy – analogous to the genome project,” says its director Ben Caldecott at the University of Oxford.

The study relies on satellite observation accompanied by manual and machine-learning techniques to obtain intelligence across geographical and national boundaries. The output, known as ‘asset-level’ data, is a unique combination of information about physical and non-physical assets integrated with company ownership, including plant location, capacity and production processes.

“Thus far, there has been no global asset-level dataset of where all the cement, steel and iron facilities are, their characteristics and who owns them. If that is lacking, it is hard to do any analysis [for investment purposes],” says Caldecott. 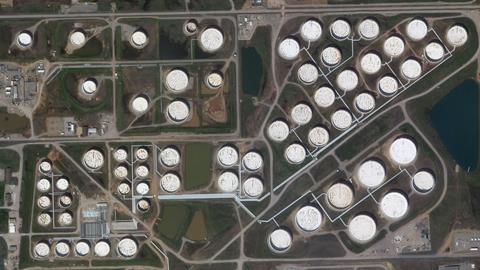 An aerial view of Cushing oil storage hub in Texas

Over the past decade, a variety of commercial data providers have been creating satellite-based products covering environmental change; business, shipping and supply-chain activity; and human movement. Some is marketed at the financial industry with particular uses for specialist investors in a sector that continues to grow.

One or two companies, such as Google in collaboration with the non-profit World Resources Institute (WRI), have supplied resources on individual industries such as the open-access Global Power Plant database. The Global Tailings Portal, an initiative between the UN Environment Programme and ethical investment groups, generates free mining tailings data based on company disclosures.

With the scramble for more commercial satellite-based intelligence and the monthly launch of new small satellites, competition among commercial providers of such data is increasing. Researchers and environmental charities are concerned that this could obstruct the availability of comprehensive research and its integrity.

Hence, Caldecott envisages a unique role for his centre as it develops the concept of spatial finance. Firstly, the range of datasets will cover multiple sectors of the economy rather than just one.

Secondly, it could act as the first port of call for accurate data because it is publicly available and backed by the rigour of scientific institutions that would rectify deficiencies in available data.

“In the last few decades, billions of dollars have been invested in environmental science such as climate modelling and earth observation datasets,” Caldecott says. “Much of the small proportion of that data that finds its way into financial decision making is not used very effectively. In fact, some might argue, abuse of data is occurring.”

Caldecott is also inviting ESG data companies to engage: “We would like ESG ratings providers to be using the data and make sure they use it well.”

Research network
Through its interconnection with a cluster of research establishments across the UK, the centre uses resources from different disciplines, such as artificial intelligence and hydrology.

Members include the universities of Bristol, Leeds and Reading, Imperial College London, and the Alan Turing Institute. Research from the CGFI will also be used to stimulate innovation and spinouts.

As an example of erroneous data that can be corrected at the centre, Caldecott points to the exploitation of global climate models, which have been downscaled by data companies to derive an assessment of physical risk while claiming a high degree of granularity. “Scientists developing global climate models say they are not designed for that purpose,” he says.

Redressing such inaccuracies, and improving precision through primary research, is one objective of the CGFI, alongside the asset-level datasets.

In addition, the Spatial Finance Initiative will be available to help financial organisations improve insights on a variety of questions, such as bank credit risk analysis.

The cultivation of spatial finance could tear up the corporate reporting rulebook. Such alternatives to ESG reporting are required because disclosures continue to be unsatisfactory, says Caldecott, suggesting this is because companies report mainly on how they intend to manage risks and externalities rather than on the risks and externalities themselves. What is more, they include information that is out-of-date because of the time lag between preparing accounts and their publication.

“The way you get information you need for climate and environmental analysis of risk exposure or externalities of companies and across portfolios of companies is not through ESG disclosure.” Spatial finance could generate that information while also yielding new intelligence about private non-listed companies.

Even so, the earth observation it depends on has only become possible as a result of the proliferation of small satellites since 2009. According to the London-based foreign affairs think tank Chatham House, the international rules-based order for space – enshrined in a 1967 Outer Space Treaty – has not kept pace with rapid and dramatic changes in the use of space.

It recommends new norms of behaviour and rules to address increased numbers of satellite owners, the emergence of mini-satellites, asteroid mining, cyberwarfare, and the potential deployment of defensive space weaponry to protect satellites. With no international regulations yet directed at the private sector, the growth of the field might encounter political obstacles.